Wall Street has never seen a company like Palantir

Wall Street has never seen a company like Palantir before.

Part software company, part consultancy, with a controversial dependence on US government and military work, Palantir only has 125 customers and remains heavily lossmaking after 17 years in business.

Last week it took the wraps off its plans for a direct listing of its shares on the New York Stock Exchange, coming to the market in a boom year for tech stocks.

But the market is unlikely to treat it as the kind of software stock now in high demand.

To start with, the nature of Palantir’s work was always guaranteed to put it under a spotlight. Its surveillance tools, developed in the wake of the 9/11 attacks, were designed to automate the work that intelligence officers previously carried out by hand.

The sheer power of the technology, founded on integrating many different data sets, has made it possible to sift entire populations in the hunt for terrorists or other miscreants.

Its work has extended beyond national security and intelligence into the commercial world — JPMorgan was using its software eight years ago to try to spot rogue traders. But high on its list of priorities, according to a regulatory filing published last week, is to make itself “the default operating system across the US government”. 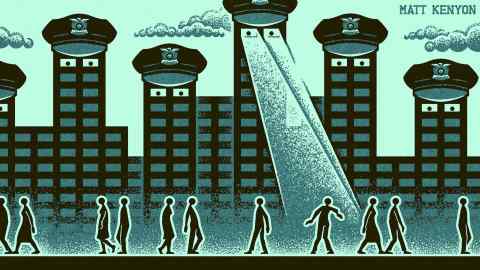 After its co-founder, the venture capitalist Peter Thiel, spoke in support of Donald Trump at the 2016 Republican convention, Palantir has also become a lightning rod for a polarised America.

“Everything changed” at that moment, said Chris Hoofnagle, a professor at the University of California, Berkeley who serves on the company’s internal privacy and civil liberties council.

Since then, the outcry over some of its work — particularly helping US Immigration and Customs Enforcement identify illegal immigrants for deportation — has become “a kind of collateral attack on President Trump”, he said.

Palantir’s backers have long sought ways to set it apart from other big US tech companies that hesitate to take on defence work, as well as traditional US defence contractors, which do not have roots in the Silicon Valley software industry. “We have chosen sides, and we know that our partners value our commitment,” Alex Karp, chief executive officer, wrote in a letter to investors.

But Mr Karp also conceded that the ethical challenges the company faces are “constant and unrelenting”. In its filing, Palantir sought to stress its work with “liberal democracies”, while also leaving room for helping other US allies that don’t live up to that description.

Some insiders have been frustrated by the continued public association of the company with Mr Thiel, and maintain that he has not been involved with its operations for years.

But the serial entrepreneur remains chairman and has 29.8 per cent of a special class of supervoting shares — a bigger slice than any other insider. Through another special class of stock, he is one of three co-founders who between them are effectively guaranteed long-term control of the company, even if their personal shareholdings dwindle almost to nothing.

We need to come to a place where data controllers are required to have procedures and safeguards, and actual enforcement against misuse

Palantir has also been beset by the widespread perception that its work has given it too much control over deeply sensitive personal data, for example when it was given an assignment earlier this year to collate health data in the UK in the fight against Covid-19.

The company itself has insisted that it only hosts the data on behalf of its clients, like any other enterprise software company.

According to Mr Hoofnagle, audit trails and other privacy controls built into Palantir’s technology make it possible to see who has had access to information in its systems and what it has been used for, putting it streets ahead of the tools of other technology companies.

It is possible, for instance, to see what weight each piece of data gathered in an investigation has had in a final decision, something that is not possible with manual investigations.

But even if Palantir does not control the data itself, its technology puts huge power in the hands of customers, many of whom do not disclose how they are using it. “We need to come to a place where data controllers are required to have procedures and safeguards, and actual enforcement against misuse,” said Mr Hoofnagle.

Aside from its controversies, Palantir now also has to persuade Wall Street of the merits of its business model.

As recently as 2018, it registered an after-tax loss equal to its entire revenue for the year. Much of that reflects the high cost of the engineers needed to customise its software to work on each assignment.

Its projects have also been expensive to run: for its work with the CIA, the company long had 10 engineers posted full-time at the agency, according to one person familiar with the company.

Despite being in business 17 years — far longer than most other big private tech companies — the company has only recently tried to reshape its operations into something more like the traditional software business model, cutting the time it takes to install its tech and replacing engineers with more automation.

The intermittent nature of its big contract wins also makes it hard for investors to judge the company.

Revenue jumped by 49 per cent in the first half of 2020, double the pace of the previous year. Much of that stemmed from victory in what Palantir claimed was a landmark court case, challenging the US Army’s preference for building its own software platforms rather than buying something already commercially available. Since then sales to the US army have leapt, accounting for 16 per cent of sales in the first half of this year, compared to only 1 per cent in 2018.

Palantir also claims its underlying profitability has risen fast over the past 18 months, pointing to an internal measure known as “contribution margin”. This metric — gross profits less sales and marketing costs, but with stock-based compensation expenses added back in — jumped from 21 per cent in 2019 to 48 per cent in the first half this year.

A precipitate fall in sales and marketing costs as a share of revenue accounts for most of the improvement, raising a question about how sustainable its higher growth rate will turn out to be. And if stock compensation costs were factored in, even Palantir’s chosen profit margin would fall to only 10 per cent.

Another consequence of Palantir’s high marketing costs and small number of high-value clients has been what people familiar with its business concede is a powerful incentive to hold on to customers for the long term in order to make the relationships profitable.

This has fed into criticisms that the company uses initial contracts with new customers to establish a foothold, before using these to turn itself into an essential vendor at the heart of vital intelligence systems.

Its Covid-19 work in the UK, for instance, was undertaken free of charge, leading to suspicions that it was part of an effort to build the technology foundation for a longer term push into the healthcare market (a similar Covid-19 assignment in the US was undertaken on commercial terms, because of contracting rules that forbid agencies accepting free work).

Palantir has long argued that it gives customers the tools to export their data easily if they no longer want to use its technology. But the nature of its contracts may make that a rare occurrence. “Once it’s working, you hardly ever replace a surveillance system, historical data is so important,” said Alfred Chuang, a veteran software executive and investor.

If that proves right, and if Palantir can extend its reach into the guts of some of the most sensitive government and corporate data systems, it may finally have a shot at turning a profit.