I first wrote about VYNE Therapeutics (Vyne) (VYNE), which was at the time still called Menlo Therapeutics, back in June. The company had just recently gotten its second product, Zilxi, approved and was working through launching its first product, Amzeeq, during the tough conditions of the pandemic. We now have financial data from the first half of the year, and the market has been largely unimpressed.

Slight delays to launches like what Vyne is seeing can potentially create interesting value opportunities if the long-term thesis is still intact. In this article, I assess how Vyne’s product sales are looking and whether the slower launch substantially impacts the valuation modeling I did.

In June, the company was still called Menlo, and I noted that Menlo looked substantially undervalued at a market cap of about $330 million. My opinion was largely based on its 2 recent FDA approvals for Amzeeq and Zilxi. The peak sales estimates I saw for Amzeeq ranged from $200 million to $250 million+, and the estimates for Zilxi seemed lower on average, from as low as $100 million to $250 million on the high end.

Menlo was just getting started selling Amzeeq at the time, and Zilxi sales were not expected to even start until late 2020. Menlo had also just struck a deal with Cutia for the Chinese rights to its products and had received an upfront $10 million payment as part of the deal. Finally, I noted that Menlo was likely to raise cash later in 2020 as its runway only appeared to get it to early 2021.

Vyne’s First Half of 2020 Performance

First off, it’s worth more explicitly noting the name change. On September 8, Menlo Therapeutics officially became VYNE Therapeutics, and the ticker symbol changed from MNLO to VYNE. Nothing else noteworthy changed about the company.

A month prior, the company reported its financial results from Q2 as well as cumulative data for the first half of the year. Vyne recorded $13.4 million in revenue in the first half, but this is far less impressive after noting that $10 million of that total was a one-time upfront payment from Cutia and $200k were royalties from Cutia. This means that Amzeeq sales were only $3.1 million despite expenses ramping up substantially more.

Vyne had $67 million net loss in the first half of the year after removing non-recurring expenses. This is largely because SG&A expenses went from $12.1 million to $51.8 million, a whopping 428% increase. Overall, expenses were $45.4 million higher in the first half of 2020 versus the year prior with just $3.1 million of extra revenue to show for it. Not exactly the sales ramp-up I would have hoped to see outside of the difficult conditions of the pandemic. The market has also seemed unimpressed, dropping the company’s market cap from $330 million at the time of my article in June to about $285 million today.

Vyne also raised $54 million in dilutive capital during Q2. Factoring in the raise, Vyne had $100.4 million in cash and equivalents at the end of Q2. Again at a current burn rate of about $130 million per year from annualizing the first half of 2020 burn rate, Vyne will still need substantial additional capital before its products generate enough to sustain the business. This to me is the biggest risk of an investment in Vyne, that sales continue to be slow and the amount of additional capital raised dilutes current shareholders into an eventual loss of capital despite the company having 2 quality, already-approved products.

I don’t see continued sales problems as the most likely scenario though. I would expect sales to start picking up in the latter half of the year as hopefully people start resuming a lot of the non-critical doctor’s visits that they delayed in the spring. 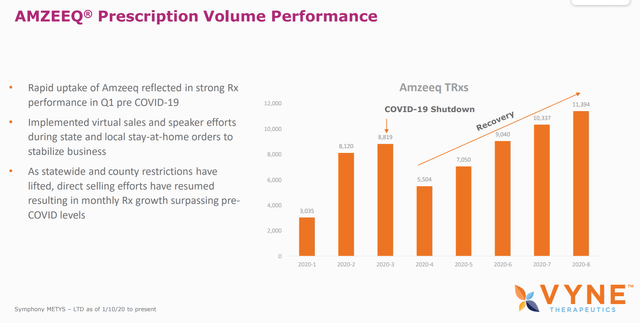 Amzeeq sales, in fact, are already showing strong month-over-month recovery from the April trough. Judging from the July and August bars in Figure 2, we should be looking at a new quarterly record for sales in Q3.

What We Can Expect Moving Forward

Vyne has several things coming up later this year that could meaningfully boost the company’s outlook. First, Zilxi will launch in Q4 which will have an immediate and growing effect on cash flows. This will also hopefully result in a slowing of expense growth that we saw on the Amzeeq launch since the same sales reps that market Amzeeq will be able to also market Zilxi to many of the same dermatologists, meaning we may finally see some of the benefit of the synergy Vyne has long discussed.

Secondly, Vyne announced that data from the FCD105 Phase 2 trial was positive. The company now intends to have a Phase 3 meeting with the FDA later this year. I still think FCD105 could be on track for a 2023 or early 2024 launch date if all continues to go well. As you’ll see below, I haven’t factored FCD105 into my valuation model for Vyne at all yet, meaning any sales Vyne gets from it represent substantial additional upside from here, especially since that peak sales estimates for another differentiated acne product could certainly be in the $100 million+ range again given that acne is a large and growing market.

Last, hopefully royalties from Cutia will continue to grow since Vyne reported royalty revenue for the first time in Q2 from its partnership with Cutia to sell Finacea foam in China. Although small so far at just $200k, these sales will likely build to be something a little more meaningful in the coming quarters. Anything Vyne gets from Cutia will help to offset some of its own launch costs in the US.

I updated the valuation model I discussed in my prior article to only factor in $7.5 million in revenue from Amzeeq this year and none from Zilxi to try to keep my model as conservative as possible given the changed circumstances. I also factored in the cash raise that took place since my last article and the fact that I think substantial additional cash will still be needed due to Vyne’s high current cash burn rate and slower product sales ramp-up.

As you can see from Figure 5, although well below the $3.31 fair value estimate back in June, I still show a wide margin of safety between the current price under $2 and my updated fair value estimate of $2.57. Keep in mind, this model factors in zero cash flow from FCD105 and uses peak sales estimates for Amzeeq and Zilxi of $200 million and $100 million, respectively, both at the low end of analyst estimates I’ve seen. Thus, there should be substantial potential upside for the patient investor if Vyne executes well and little long-term risk of permanent loss of capital at the current level.

This type of long-term value play is perfectly in line with the type of opportunities that I will be covering in my soon-to-be-launched Marketplace Service, Biotech Value Investing. With a target launch date of October 1, this service will provide in-depth coverage of my approach to finding high-quality, value-oriented companies in the biotech sector. Subscribers will get my bi-weekly newsletter on value opportunities in the sector as well my model portfolio and weekly deep-dive articles on portfolio companies and targets and full access to my valuation models like the one used here.

Disclosure: I am/we are long VYNE. I wrote this article myself, and it expresses my own opinions. I am not receiving compensation for it (other than from Seeking Alpha). I have no business relationship with any company whose stock is mentioned in this article.

Additional disclosure: I’m not a registered investment adviser. Please do not mistake this article, or anything else that I write or publish online, as any type of investment advice. This article and anything else that I post online are for entertainment purposes only and are solely designed to facilitate a discussion about investment strategy. I reserve the right to make any investment decision for myself without notification except where required by law. The thesis that I presented may change anytime due to the changing nature of information itself. Despite the fact that I strive to provide only accurate information, I neither guarantee the accuracy nor the timeliness of anything that I post. Past performance does NOT guarantee future results. Investment in stocks and options can result in a loss of capital. The information presented should NOT be construed as a recommendation to buy or sell any form of security. Any buy or sell price that I may present is intended for educational and discussion purposes only. Please think of my articles as learning and thinking frameworks–they are not intended as investment advice. My articles should only be utilized as educational and informational materials to assist investors in your own due diligence process. You are expected to perform your own due diligence and take responsibility for your actions. You should consult with your own financial adviser for any financial or investment guidance, as again my writing is not investment advice and financial circumstances are individualized.