Volkswagen Throws $86 Billion at EVs over Next 5 Years. GM, Ford, Other Automakers Plow Mega-Bucks into Shift to EVs.  Tesla Instigated It

Commercial trucks and vans too, including at Volkswagen’s Traton, one of the largest truck makers in the world, acquirer of Navistar.

Volkswagen A.G. – which is in a perennial struggle with Toyota over the crown of being the largest automaker in the world – has gotten the memo a few years ago, after its dreams of diesel domination collapsed into Diesel Gate: The future is going to be EVs. And every year, the company budgets evermore colossal capital expenditures for the EV space.

Today it released its latest number when it discussed the result of its just ended annual “5-Year Planning Round”: It will spend €73 billion ($86 billion) over the next five years on its electrification programs, amounting to nearly 50% of its total five-year investment budget of $150 billion.

In last year’s 5-Year Planning Round, it also set a five-year €150-billion CapEx budget, of which the company had assigned an already colossal €60 billion to the EV space, or 40% of its capital expenditure budget. This year, it upped it by €13 billion, to €73 billion, at the expense of the remaining programs (the total is still €150 billion). Of this €73 billion five-year CapEx budget, Volkswagen will invest:

By 2030, it plans to produce 26 million BEVs a year: About 7 million a year will use the High Performance PPR platform developed by Porsche. And about 19 million a year will be based on its modular electric drive matrix MEB (image of MEB via Volkswagen): 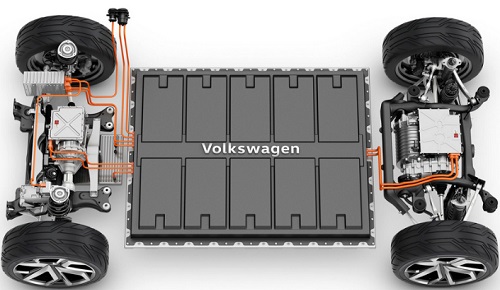 Some of the 20 BEV models Volkswagen has already put on the road include the Porsche Taycan, Audi e-tron, e-Golf, e-Bora, e-Lavida, and the ID.3.

READ ALSO  How the Fed Feeds the Boom-Bust Cycle

A few days ago, Traton finalized its agreement to purchase Navistar International (at $44.50 a share), subject to Navistar shareholder approval. A year ago, Navistar unveiled its battery-electric medium-duty truck prototype, based on technology developed by Traton.

Other automakers too are throwing many billions of dollars at developing BEVs, BEV platforms, battery technologies, battery cells, the affiliated software, and the like. But none are throwing money at it like Volkswagen.

In March, General Motors said it would invest over $20 billion in five years on its BEVs and autonomous-driving technologies. This week it said it would invest $2 billion in its assembly plant in Spring Hill, Tennessee, to manufacture the new Cadillac Lyriq electric SUV. In 2016, to learn the BEV ropes, GM started making the Chevy Bolt. In China, GM’s joint ventures already have numerous BEVs on the road, including China’s bestselling EV, built by GM’s Wuling brand, the Hongguang Mini (costs $4,300). And GM’s standalone self-driving division, Cruise, has raised funds from investors at a valuation of around $20 billion.

Tesla has raised over $25 billion from investors since its IPO, mostly by selling shares, including two share offerings this year: $2.3 billion in February and up to $5 billion via an “at the market” offering in September, to be executed in bits and pieces whenever it feels like it. Some of this cash is still on its balance sheet. The rest it burned developing, manufacturing, and selling its vehicles and other products. Tesla did a lot of heavy lifting early on, and now it has shaken up the giants.

Ford has committed $11.5 billion to the EV space. This week, it unveiled the E-Transit urban delivery van. Fleets are now clamoring for urban delivery vans with all-electric drivetrains due to low maintenance costs. And range anxiety is not an issue since urban delivery vans spend much of their time stopped, and don’t put on a lot of miles during a day’s worth of work. A year ago, Amazon ordered 100,000 electric delivery vans from Rivian Automotive, a startup where Ford is a big investor ($500 million) and strategic partner.

Ford’s first all-electric Mach-E SUVs are expected to be delivered to customers toward the end of this year. And the electric version of the bestselling F-150 truck is next.

Toyota bet a lot of money on developing hydrogen fuel-cell technologies, assuming that this would be the winner over BEVs. That bet may or may not pan out. So Toyota too has jumped into the BEV fray and belatedly started working on them.

Every global automaker is now investing billions of dollars into every aspect of electric vehicles. There have been hundreds of EV startups, most of them in China, and most of them will disappear.

The overall passenger vehicle market has been horribly mature for two decades in the US, Europe, and Japan, with essentially no growth possible. And the market is maturing in China, the largest auto market in the world. But the one segment that is now growing in leaps and bounds everywhere is the EV space.

The EV space, with so many entrants, from startups to legacy giants, and so much capital piling in, has gotten very competitive. Tesla has spent all year cutting prices across its lineup to defend its turf. At the end of September, Ford countered and cut the sticker price of its Mach-E by $1,000 to $3,000 across all versions before they even arrive in showrooms. Other automakers, such as Volkswagen are bringing cheaper models to market to begin with.

The overall auto market in developed economies will remain mature and the total number of vehicles sold in those economies will have trouble setting new records. This has been an issue for two decades. In 2015, the US finally set a new record – 17.55 million new vehicles sold – beating is prior record established in 2000 by a hair. And those were the good times: 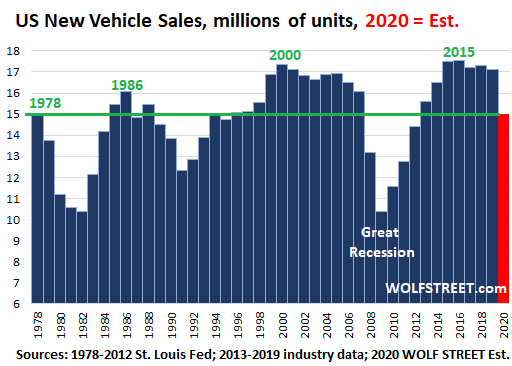 It’s not that automakers want to invest tens of billions of dollars in switching to a new technology; they’re forced to by competition. Tesla started it, and they ignored Tesla for as long as they could, and suddenly it got serious. And Diesel Gate was the other kick-in-the butt that forced their hand; it destroyed the hopes of European automakers, particularly Volkswagen, that had wagered their future on diesels.

Batteries remain a challenge, and billions of dollars are being thrown at battery-related technologies. Reports of fires continue to excite our imagination. But there have always been fires involving internal-combustion-engine (ICE) vehicles, given the combination of gasoline and heat. Each year, from 2014 to 2016 — before the mass-arrival of EVs — “an estimated 171,500 highway vehicle fires occurred in the United States, resulting in an annual average of 345 deaths,” according to the US government. But we’re used to ICE-vehicle fires. BEV fires are new, and different, and they get all the attention.

In terms of the manufacturing processes, EVs are a lot simpler to manufacture than ICE vehicles, and competition by all these newcomers will continue to push down prices. It will be very tough for automakers to make fat profits in this highly competitive environment where the old and insurmountable barriers to entry have suddenly disappeared.

Unionized automakers and component makers that have to announce these things way in advance and negotiate a solution have already warned that their payrolls will shrink as production shifts from ICE vehicles to EVs. The loss of employment will hit the German auto industry, which has staked its fame on ICE technologies and components, very hard. The announcements of future job losses have been huge. The government (playing its role as part of “Deutschland A.G.”) has offered support to these companies during the transition. And in sum-total, the shift to EVs may be a net negative for employment in the auto industry.