VMware (NYSE:VMW) remains one of the most critical and strategic software assets in the enterprise technology stack. VMware software is used to build and manage applications that built using newer technologies such as containers, microservices, and also traditional technologies such as virtualization and bare-metal applications. VMware will be one of the key beneficiaries of the digital transformation (DX) trend and the accompanying move of workloads to the cloud. VMware allows its customers to deploy applications in a hybrid multi-cloud architecture. Conservative estimates, compelling valuation, impending Dell (NYSE:DELL) optionality, and a potential catchup trade make VMware a compelling buy. Therefore, investors should use the recent sell-off to accumulate shares of VMware.

Since we first recommended VMware stock in early July 2020, the stock is down about 5%, while the S&P is up about 14% and Nasdaq is up 16%. This underperformance is not warranted, given that the company beat expectations in each of the last three quarters handily. We believe the stock is down as on-prem license growth became negative in each of the prior two quarters. License revenue declined 7% and 12% in F2Q21 and F3Q21, respectively. For F4Q, the license revenue is expected to decline again.

Many enterprises are buying subscription software in the cloud and buying software using the subscription model on-prem. Buying a software on a subscription basis is pressuring license revenue. In addition, enterprises continue to push out large deals to conserve cash. Also, many data centers remain closed due to the Pandemic, causing delays or pushouts in large deals. Large contracts are usually sold via perpetual licenses in which the revenue is recognized upfront, driving license revenue. The following chart illustrates VMware’s underperformance relative to the S&P and Nasdaq indices. 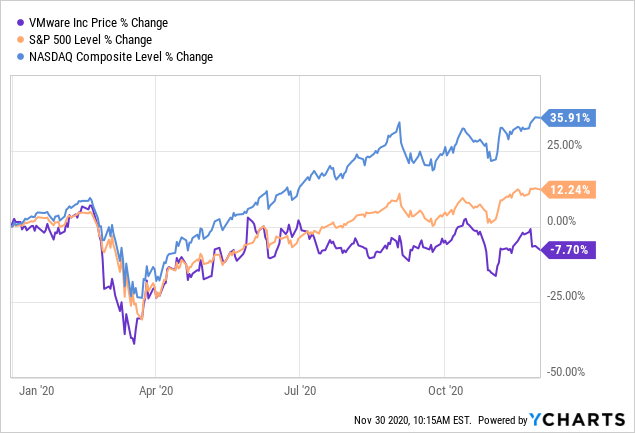 VMware has been signaling over the last two quarters that large transformational projects are being delayed due to the Pandemic. Many enterprises are looking to conserve cash and lower the risk in large transformational projects, given that most of the employees continue to work remotely. However, the company is confident that many large deals will likely close in Q4 due to the year-end budget flush. CEO Patrick Gelsinger noted on the call,

“As we anticipated, we saw continued COVID-19 impact on large transformational on-premises projects in Q3, even as our pipeline suggests some level of recovery in this area in Q4”.

“We expect total revenue to grow in the high single digits, factoring in the continued growth and a larger mix of our subscription and SaaS portfolio, incremental improvement in our on-prem performance.”

More importantly, the large deals have higher close rates than normal, given VMware is an incumbent in a majority of these deals.

During the quarter, VMware’s overall revenue was driven by subscriptions & SaaS revenue, which was up 44% Y/Y to $676 million. For the first time, subscription/SaaS surpassed on-premise license revenue. With customer buying preferences changing, VMware is now focused on enabling all of its products to be sold on a subscription/SaaS basis. Mr. Gelsinger noted that,

“We continue to expand our five franchise platform capabilities to work first and best in the cloud, enable a unique multi-cloud capability and also support customers who prefer to maintain some or all of their capacity on-premises. We are on track to make most of our major product offerings available as subscription and SaaS in the next calendar year, providing a broader set of consumption choices for our customers with the flexibility they need”.

“Our multi-cloud strategy has taken major strides forward with our cloud ARR approximating $1 billion. VMware Cloud on AWS continues to grow revenue by over 100% year-over-year. All hyperscale offerings are now available and transacting VMware Cloud, including Microsoft, Google, Alibaba, IBM, and Oracle as well as the VMware Cloud on Dell EMC.”

VMware reported another solid quarter beating both on the revenue and EPS lines. Revenue of $2.86 billion was ahead of the consensus estimate of $2.81 billion. Revenue grew 8% Y/Y, despite being impacted by license revenue declines. Revenue beat was driven by higher than expected growth of subscription & SaaS revenue, offset by higher than expected declines in on-prem license revenue. Subscription & SaaS revenue of $676 million grew 44% Y/Y and was 6% above consensus. Subscription & SaaS revenue was 24% of total revenue and was better than expected. Subscription & SaaS revenue was driven by VMware Cloud Provider Program (VCPP), VMware cloud on AWS (VMC) and modern apps. VMC on AWS grew 100% Y/Y, as many workloads moved to Amazon (NASDAQ:AMZN) first. Services revenue also grew 6% Y/Y and was also ahead of estimates by 1%. License revenue was $639 million and declined 12% Y/Y. Given the pandemic, many data centers are closed, and this is contributing to weakness in license revenue. EPS was $1.66 was also ahead of the consensus estimate of $1.44. EPS beat was driven by higher than expected revenue and lower than anticipated opex. Opex was lower due to a reduction in travel and other public engagements. The following chart illustrates our expectations versus consensus. 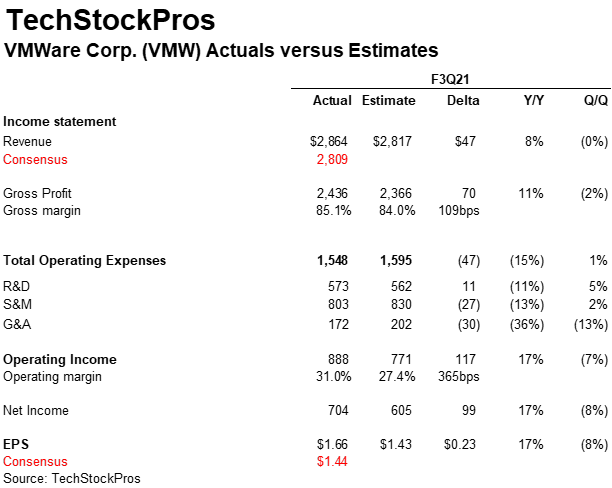 We continue to remain optimistic on VMware, given that it is the best-positioned enterprise software play. VMware is essentially a bridge to public cloud venues such as AWS, Azure, and GCP on the compute side to prevent vendor lock-in. Enterprises can use VMware on the public cloud to move applications from on-prem to cloud effortlessly. With Dell looking to unlock the value in VMware (i.e., Dell owns 81% of VMware but controls 97% of the voting power), we believe the risk/rewards remain favorable. Dell is looking to lighten its debt load (estimated to be around $48 billion), and this is where VMware comes in. Dell has several options at its disposal, including spinning out VMware as a fully independent company, free from the yoke of Dell. If Dell spins out VMware as a fully independent company, we believe many institutional investors would readily jump back into the stock, driving the stock higher. In the spin-off event, VMware’s multiple could expand to levels similar to its peer group (i.e., EV/Sales expands to 7-8x, from the current 4x levels), driving the stock quickly to the $220 to $260 levels.

Guidance is conservative and valuation compelling

VMware guided F4Q revenue of $3.225 billion, versus the consensus estimate of $3.20 billion. VMware expects EPS of $2.04, versus a consensus of $1.88. F4Q is usually the strongest quarter for the company, and we expect many large deals to close due to both federal year-end and corporate year-end budget flush. We believe the guidance is conservative and expect a repeat beat when the company reports results in February 2021.

READ ALSO  “Keeping a Business Alive that’s Generating No Revenues is an Uphill Struggle”: Friend and Hostel Owner in Barcelona. An Industry Collapses 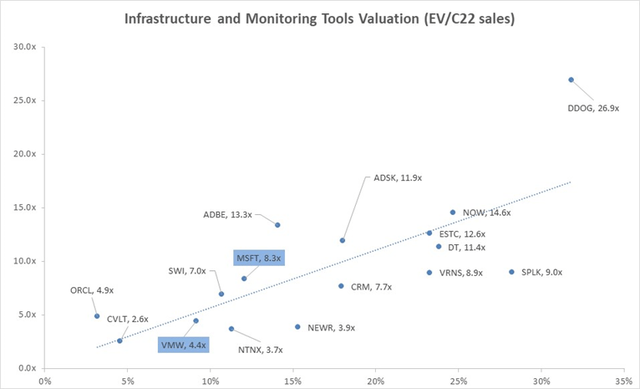 What to do with the stock

Following F3Q21 results, several Wall Street firms lowered their price targets for VMware. Out of the 29 analysts covering VMware, 20 are buy-rated, and nine are hold-rated. The average Price Target (PT) on the street is $174, and the median is $175. Some sell-side analysts were disappointed with the commentary surrounding deal pushouts and billings miss. Billings’ miss was disappointing, given that the on-prem license revenue declined more than many expected. The following chart illustrates some of the PT changes following the company’s results last week. 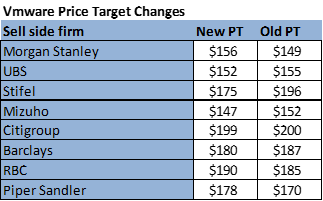 Since the earnings last week, VMware stock is down about 7%. The sell-off post-earnings affords patient investors a chance to own a strategic name in the enterprise software at a discount. With the vaccine around the corner, we expect the pandemic to subside by 2H of 2021, improving the business outlook. YTD, the stock declined by about 8%, and we believe a catchup trade is inevitable. Given our confidence in VMware product portfolio, management team, strategic position within the enterprise software stack, we remain bullish. Therefore, we recommend investors to accumulate shares.