First, this article may not be for everyone. There are plenty of differing opinions on firearms and ammunition, and Vista Outdoor (NYSE:VSTO) makes a LOT of ammunition. In fact, the Shooting Sports segment of its business is roughly 65% of revenue and gross profit. In spite of the perceived dark side of firearms, this is also an industry that is seeing incredible growth and has some runway to it. So while I would rather stay away from hot-button issues, I cannot avoid the fact that Vista Outdoor is a company that is incredibly profitable and is at least a 2-6 month buy for those who would like to participate in that profit.

My recent article on Sturm, Ruger (NYSE:RGR) points out many reasons why firearms can keep selling. Vista Outdoor, however, makes 65% of its money on items that are consumable that are used with firearms. That is a large area to profit from, as all of the recent sales in firearms lead to more sales in ammunition… and ammunition is usually used once and then needs to be purchased again.

In terms of equals in the U.S., Vista Outdoor does not really have any. Its business is mostly ammunition, with a mixture of firearm accessories and outdoor recreational equipment. As mentioned above, the main portion of Vista’s business comes from ammunition and firearm accessories. This can be problematic at times, but in today’s sense of political unrest, many folks look to feel safer… and whether you like it or not, they feel safer when they can protect themselves.

Companies like Sturm, Ruger and Smith & Wesson (NASDAQ:SWBI) are pretty much pure plays on firearms, which tend to last decades. The only other public or private companies with much in terms of sales that are housed in the U.S. would be Olin Corporation (NYSE:OLN) and Remington. Olin is a company that owns Winchester ammunition; however, its main business is chlor-alkali, and it gets roughly 10-15% of its profit from ammunition – so it is not as effective in capturing gains in the industry. The other company mentioned, Remington, was recently purchased out of bankruptcy by Vista Outdoor… for the price of $81.4M. (Remington sales were roughly $200M in 2019 – a down year – so it’s needless to say that Vista got a great deal!). Vista used $51M cash on hand and $30M from its revolving credit line for this purchase.

The biggest names in ammunition – at least for American-made ammunition – are Federal, Speer, American Eagle, CCI, Winchester, Estate, Blazer and Remington. There are many smaller names, but these are the most popular… and now Vista Outdoor owns and produces all of these except for Winchester. So when I mention there is no great comparison company, this is why!

I have mentioned it in previous articles; however, when society feels less safe… people tend to purchase firearms or other means of protection. Given political leanings and protests, as well as the likely contested upcoming election, many folks are buying lots of products that make them feel safer. Currently store shelves are empty of the most common ammunition as well as ammunition products like primers (used to start the powder burning in ammo) and powders (what burns in ammo and launches the projectile). While some are possible to find, they are becoming rarer, and many folks are sharing photos of empty shelves where stores usually had aisles of products.

This demand has increased the overall pricing for ammunition. As an example, six months ago, you could go to a discount store and purchase 100 rounds of 9mm ammunition (the most popular caliber) for about $20-24. Today, if you are lucky enough to find it, you will likely pay $50-60, sometimes more, for the same ammunition. This is why Vista mentions no fewer than five times in its previous conference call that it is seeing favorable pricing trends.

“We are on the forefront of what we believe is a long-term resurgence in outdoor recreation. We also believe Vista is perfectly situated to capitalize on these trends with our market-leading brands and the transformation we have made.” – Source: Q1 Earnings Call (August 9, 2020) Emphasis added

The earnings statements mentioned that outdoor recreation quickly became the “go-to” form of entertainment, escape and exercise as Covid restrictions took hold and started to be lifted. This drove stronger sales than management had expected, but it was ready for the transition due to business adjustments made over the last few quarters.

On top of this, there was mention of a large international order that increased income. The large order was scheduled for Q4 of last year and never happened (this reduced sales in Q4). However, this order was rejected/cancelled during Q1 and the product was re-apportioned to the sales channel, increasing margins on what was already produced.

These earnings slides really show just about all that is needed… 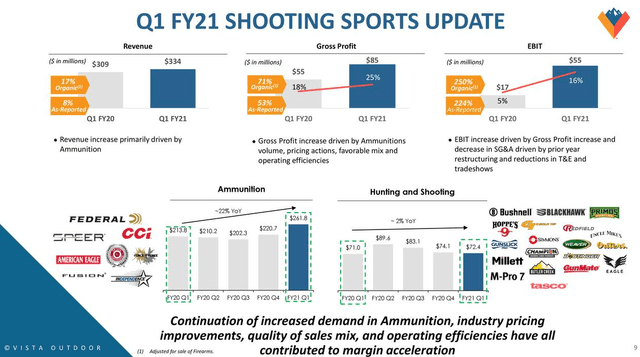 The larger Shooting Sports segment profit was up 25% QOQ and had organic sales increase for EBIT of 250%. Outdoor Products’ EBIT increased by 68% QOQ. The company also mentioned that it continued to see “pricing improvement” (higher margins due to higher prices) and favorable commodity pricing. 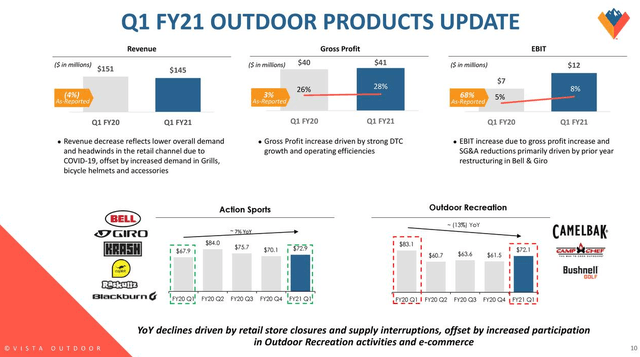 Debt levels that used to be surprisingly worrisome have come down quite a bit at Vista, including a $73M reduction in Q1. (We can expect similar reductions in profitable future quarters, as Vista management has become more conservative with funds over the last few years). This debt paydown has reduced leverage to a 2.6x ratio, and before the end of Q1, Vista had knocked the debt in half within five quarters’ time. (Latest debt numbers stand at $413M, listed during Q1).

Q2 guidance shows that management expects sales of $495 to $515M during the current quarter and a QOQ increase in Adjusted Earnings to $0.60 to $0.70 per share. This 20% QOQ increase from Q1’s great results is expected even as the company plans to reduce capital expenditures and lower debt levels. (Admittedly, the Remington purchase added some debt to its overall balance, but the $30M addition to its revolving line added a likely $200M+ in sales for the next year. That seems forgivable to me). The highlighted section of the above slide is not to be missed, as management is known for being conservative in guidance – yet it announced that it expects “significantly better” results in Q2.

Packaging Up the Gift

In all reality, I find Vista Outdoor to be a gift in the market. The stock has been punished by sellers and shorts after the Q1 results were posted and traders took their short-term gains. (I was one of them). However, the next few quarters appear to have similar demand for the products that Vista Outdoor makes, and I see no reason why shares cannot move higher for the next 2-6 months’ time, possibly longer.

Ammunition, the main portion of Vista’s business, is still in a strong growth trend. This is at a time when folks seem to be willing to pay much higher prices than they would have even six months ago. NSSF (the Firearm Trade Association) has mentioned five million first-time firearm buyers as of August 2020. That is 40% of the transactions it was able to get data on, suggesting great growth. This increase in consumable ammunition is coming in large part to Vista Outdoor – and this is a trend that may just be getting started. This trend includes 58% more buying from people of color and women, which also suggests this is a societal shift in opinion in some respects.

While I believe Ruger and Smith & Wesson will have great results in the next quarter, I believe Vista Outdoor will beat the increase in sales numbers by a larger margin. Anything in the $20 range seems to be a gift, and I am a buyer into the next earnings results. I expect a substantial beat.

Disclosure: I am/we are long VSTO, RGR, SWBI. I wrote this article myself, and it expresses my own opinions. I am not receiving compensation for it (other than from Seeking Alpha). I have no business relationship with any company whose stock is mentioned in this article.