Visa (V) recently reported its May month transactions volume on June 1, and although the month still showed a 5% YoY decline in total US payments and a 12% decline in global processed transactions, reading into the report paints a bullish picture for spending recovery for June and onwards.

Most key metrics are still showing YoY or QTD declines in volumes for the month of May. As stated previously, US payments fell 5% but were up 13% since April; global processed transactions showed a 12% decline YoY for May but a quarterly improvement of 12%.

Debit transactions were the only category to show an improvement for May, up 12% YoY and pushing QTD transactions up 4%. Transactions through debit are rising as states relax restrictions for reopening procedures and consumers are heading out and about again.

As that is the case, the significant difference between US payments and cross-border volume is understandable (EU/CAN/JPN/AUS are still down, while CHN/NZ/DEN are showing positive YoY dollar growth). However, cross-border e-commerce transactions were up 18%, as e-commerce spending and usage have surged substantially from the pandemic effects. 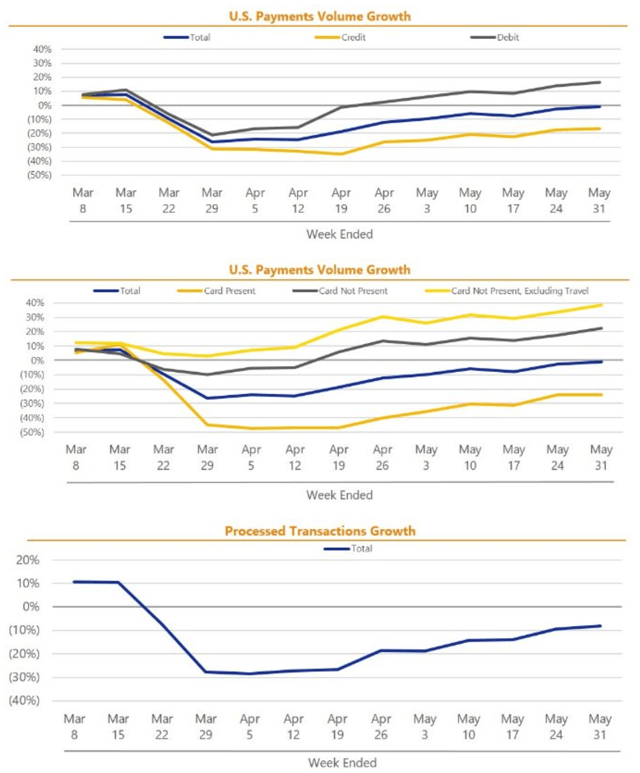 Although Visa is seeing total US payment volume growth climbing again, credit still lags far behind debit growth. April saw much of the bottom for total payments, as debit did not start to grow until the week of April 19. Total transactions were at a low throughout most of April and have slowly climbed throughout May, yet are still far off from March levels.

Card-Present (CP) transactions are still significantly low, as store closures and limited capacities at other establishments have redirected traffic away during March and April. Where Visa has seen the benefit is in Card-Not-Present (CNP) transactions – excluding travel, CNP transactions never fell negative. Since these transactions include online purchases and payments, invoices, recurring payments and over-the-phone payments, there would be no reason to see a decline in these payments unless the organizations and/or individuals making those types of payments declined significantly.

As states start to reopen, Card-Present transactions could continue to see benefits, but other forms of payments like cash and Apple Pay (AAPL) could also see increases in volume. CNP transactions are likely to continue volume growth with the higher adoption of e-commerce during the quarter as well as the necessity for payments with recurring structures, such as utilities.

In its 8-K, Visa broke down its category performance as well, within 20% growth/decline intervals. When looking at the categories and how each has performed, the company’s overall volume declines are not as bad as they seem.

Food & Drugstores: Obvious winner, as that category of stores has seen the highest benefit from the stock-up effect, which admittedly has slowed since March. It still remains higher YoY, with grocers seeing surges in traffic and wholesale retailers like BJ’s Wholesale Club Holdings (BJ) posting outstanding numbers. Growth in this category is likely to continue, although it could drop to a lower rate of growth as people grow less fearful about supply of food in stores and less inclined to load pantries.

Home Improvement: Home Depot (HD) and Lowe’s (LOW), as well as channel distributors in those stores (The Scotts Miracle-Gro Company (SMG)) saw spikes in demand throughout April and May as customers turned to DIY and home improvements after being stuck at home for weeks. Growth remaining above 20% for this category remains a bit dubious on the basis of homebuilding and other large purchases having to do with full-home remodeling, which was expected to slump relative to DIY.

Retail Services: One of the more unlikely picks to be witnessing 20% YoY growth, but the reopening allowing some/most of service-oriented establishments to serve customers, as opposed to March/April during lockdown, could cause a large rush of customers. Sequential strength is not as likely within this category YoY due to the extenuating circumstances around May and reopening possibly leading to a one-time rush for the month.

Automotive: Although unknown exactly where on the growth spectrum these three categories sit, the growth in automotive payments could be from more people driving to places after reopening relaxed and spending more buying more auto parts, gasoline or service and maintenance. Yet, strength in this category points to a longer-term growth trend, as auto sales (which had been hammered) are showing signs of an April bottom and further YoY growth in automotive spending could be witnessed by next quarter and by next May.

Retail Goods: Strength in retail goods is as expected, as stores are reopening after extended closures. Soft goods could still have more room for recovery, as apparel makers and retailers are still feeling effects of closures to stores. And with e-commerce stealing the limelight within hard goods like furniture, appliances and electronics for April, physical stores could be starting to earn their fair share again. Spending on retail goods is a bright sign for consumer spending: whereas purchases in softlines are sometimes more frequent, hardline purchases can run more expensive in some categories and back the bullish stance on a recovery in consumer spending even when incomes have possibly taken hits.

Telecom & Utilities: Growth here is as expected, although a majority of these payments should fall into the recurring payment segments. Some workers are still working from home and possibly using a higher proportion of these services than they would during a normal 9-5 workweek. Broadband data usage has spiked during Q1 from the shift to work-at-home, but data consumption within streaming services and video games, among other things, has also pushed usage higher.

Business Supplies: With many businesses operating at lower capacities and some/many small, mom-and-pop ones closed, it’s not much of a surprise to see business spending still down YoY. Yet, this could point to a worrisome trend if spending in this category remains lower, as it could signal that these businesses are no longer buying as much supplies, and therefore, selling less products.

Department Stores: Understandable given how department stores have fared during the outbreak. Sales plunged nearly 29% in April and re-openings in malls was quite slow in some states, until nearly halfway through the month (when Simon Property Group (SPG) announced its reopening plans). However, even with the decline in sales, limited operations, bankruptcies and other circumstances leading to declines could be seen as a positive as the category sits within the smallest of the three declining categories.

Education and Government: With schools going to online learning, combined with graduations and the end of the school year in May for a majority of the nation, seeing declines in volume is not too jarring. With the summer months ahead, a recovery here might have to wait until closer to the back-to-school (or online school) time.

Healthcare: Similar to retail services, seeing a decline in healthcare could be a bit confusing at first, but many organizations like dental offices, pediatricians, and other specialty doctors remained closed for procedures, opening only for “emergency” cases. Volume here is likely to tick up as those offices began to reopen in June for normal operations, although at limited capacities and less-crammed hours.

Restaurants and Quick Service Restaurants: While major chain places and other smaller restaurants began offering take-out, delivery and drive-thru, different restrictions on a state-by-state basis kept dining rooms closed for parts of May, keeping sales volumes lower. Even though volume here is a sharp YoY decline, the potential for a quick snap-back in volume should no further restrictions be implemented remains.

Entertainment: The obvious laggard of the categories as basically most forms of entertainment, from concerts to sports events, remained cancelled for May. Volume here could be one of the slowest to recover, as sports are starting to turn towards fan-free events for league play, and other venues might still have to wait a while before resuming due to the crowded nature of events.

Fuel: Goes hand in hand with travel, the remaining category that suffered an over 40% decline YoY. Commuting to work is not really happening to the same degree, and trips out and about are also rising slowly as closures abate. Some states with stricter restrictions are still seeing less travel, while others are seeing travel and traffic rising rapidly. Lower fuel costs compared to the year-ago May also could contribute to the decline.

Travel: A bit of the same as before, with the holiday weekend potentially spurring spending as millions traveled to beaches and relatives for the weekend to get a “first taste” of summer sun. However, travel is still very limited with flights on low capacities and cruises still at port, so much of the benefit will be seen from car-related travel. Airline screenings of passengers have jumped since March and April but still sit way off year-ago numbers. Alongside entertainment, travel could take a long time to recover to pre-pandemic levels.

Coronavirus cases have been rising in many states following the holiday weekend and the protests arising nationwide, but there’s no guarantee that this uptick in the 7-day average of cases/hospitalizations signifies a second wave. We might escape a second wave, we might not; either way, there are still fears about stricter measures again and hopes for another stimulus bill in late July.

Should stricter measures return, even for a shorter duration, spending within retail services/goods could fall, while grocery & drugstores volume could rise further. The laggards of all, entertainment, travel and fuel, will likely take much longer to recover and would not be as affected by a secondary enforcement of stricter policies around social distancing. Yet, a second stimulus, if providing the same amount as the first round, could put a little extra in the pockets of those affected most and help boost their spending by a small margin (although it could be put towards necessary expenses and saving first).

April looks to have been the weakest month for Visa’s volume trends, and upticks in volume are being seen within the least affected (i.e., the quickest to reopen) categories; Europe and international trends still lag the U.S. as expected due to slower reopening times behind the curve. Spending is likely to rebound slower in the beaten-down categories, while overall volume should continue recovering as it has throughout May. Late June could see an early return to positive territory for global processed transactions, but that hinges on international recovery beginning before or at that time. E-commerce, debit and CNP transactions should remain the major drivers for the remainder of June and likely throughout July, and now that a bottom seems very-well established, the path to recovery and future growth again looks to have resumed.

Disclosure: I/we have no positions in any stocks mentioned, but may initiate a long position in V over the next 72 hours. I wrote this article myself, and it expresses my own opinions. I am not receiving compensation for it (other than from Seeking Alpha). I have no business relationship with any company whose stock is mentioned in this article.