A fresh mass outbreak of Covid-19 could increase the risks of an external debt crisis among emerging and developing economies which are vulnerable to sudden capital outflows, the IMF warned on Tuesday.

The economic impact of the pandemic has been especially acute for countries that rely on oil, tourism or remittances from migrant workers. Many of these countries faced a fall in their current account balances this year equivalent to more than 2 per cent of gross domestic product, said the IMF.

In its annual assessment of global imbalances, the fund said trade balance losses were likely to exceed 3 per cent of GDP for oil exporters such as Norway, Russia and Saudi Arabia. In countries such as Costa Rica, Morocco and Portugal, losses of tourism proceeds could exceed 2 per cent of GDP, while lower remittances would hit hardest in countries such as Guatemala, Pakistan and Egypt.

“Such intense shocks may have lasting effects and require significant economic adjustments,” wrote Martin Kaufman and Daniel Leigh, the report’s authors. Allowing currencies to depreciate would be the best way to adjust to these shocks, where feasible, the fund said, but it added that currency intervention or capital controls could be warranted in some circumstances.

A resurgence of the pandemic, bringing renewed stress in financial markets, could tip countries that already had large current account deficits, high foreign currency debts or low reserves into crisis, the fund said, forcing them to default on their debts or call for more IMF support.

The world entered the pandemic with “persistent, pre-existing” imbalances between global spending and saving that increased the economic risks, the fund’s assessment showed.

About 40 per cent of countries it assessed had excessive surpluses or deficits in 2019, the fund said, and these were concentrated in advanced economies, with Canada, the UK and US standing out for the unwarranted size of their deficits. 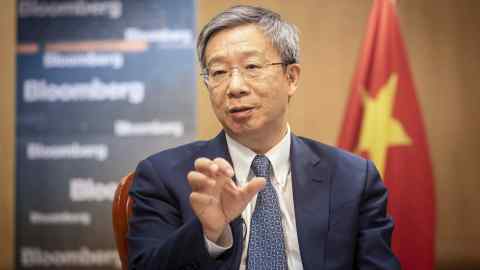 Excessive surpluses were concentrated in the eurozone, the IMF said, with Germany’s current account surplus set to fall from $275bn to $199bn in 2020, still equivalent to 5.6 per cent of its GDP.

But the IMF reiterated the judgment it made last year that China was no longer contributing to the world’s imbalances; its external position was broadly in line with economic fundamentals in 2019. The IMF estimated its current account surplus would rise to 1.3 per cent of GDP in 2020, due to the sharp fall in outbound tourism, weaker global demand for its exports and lower commodity prices, but would continue to decline in the medium term.

The fund said depreciation in the renminbi in 2018 and 2019 had been largely driven by trade policy announcements, and criticised a policy adopted in the US earlier this year that would allow Washington to impose duties on goods from countries deemed to be undervaluing their currencies.

Such currency-based countervailing duties posed a risk to the global trade system and were counterproductive, since they would strengthen the currency of the country imposing duties, the IMF said.

READ ALSO  Corporate bond market wavers ahead of US election