Donald Trump’s positive coronavirus test has refocused attention on the president’s health, which has been the source of speculation throughout his term in office.

Mr Trump, who was the oldest person to be elected as a first-term president, has frequently boasted about his good health, using it as a campaign tactic against Hillary Clinton during the 2016 presidential race, and against rival Joe Biden this year. His annual medicals while in office have described him as a relatively fit, if overweight, man in his 70s.

But some claim the rosy picture painted by these public announcements jars with episodes that suggest the president might not be in as robust health as he claims.

“The president is someone who wants to present himself in a particular light, and he has shown that truth and transparency are not his priorities,” said Teneille Brown, a law professor at Utah university.

“There is a sense that even if something were to develop which was significant, we could not trust this president to be transparent. He has a big political interest in obscuring any symptoms.”

If the president is incapacitated, it is very difficult to remove them from office unless they voluntarily remove themselves

The interest in Mr Trump’s health stems not only from his age, but also from his willingness to use it as an electoral weapon. In 2016, he frequently accused his rival Mrs Clinton of lacking the “stamina” for the job, while his campaign ran an advert shortly after she fainted showing the footage and accusing her of a lack of “fortitude” and “strength”.

This year he has used similar campaigning tactics, accusing Mr Biden, the Democratic candidate, of lacking mental capacity. In the lead up to Tuesday’s televised debate, he called for Mr Biden to be drug-tested to insure he was not taking performance-enhancing substances.

In his 2016 campaign, the then presidential candidate released a letter from his own doctor claiming that if elected, he would be “the healthiest individual ever elected to the presidency”.

After Mr Trump’s first medical exam as president, Ronny Jackson, then the White House physician, pronounced the president to be in such good health that if he only enjoyed a better diet, “he might live to be 200 years old”. Other medicals since then have also found him to be in excellent health — though a slight weight gain this year means he is now technically obese.

These exams, however, have not stopped questions about his fitness.

Last year, the president paid an unannounced visit to Walter Reed hospital just outside Washington DC. The White House said at the time the visit was “routine”, even though it kept the details of the visit secret for two days afterwards.

Michael Schmidt, the New York Times reporter, later claimed in a book that vice-president Mike Pence had been put on standby in case Mr Trump needed to be anaesthetised. 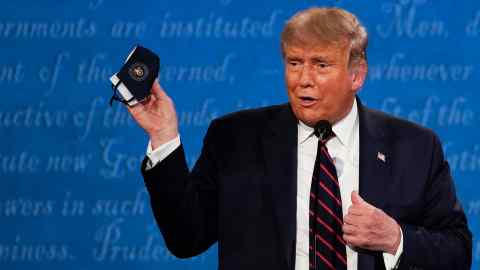 Earlier this year, his health became the focus of attention once more after he gave a speech at the West Point military academy during which he appeared to struggle to hold a glass of water, and later to descend a ramp.

After the incident triggered speculation about Mr Trump’s health, his doctor released a statement saying: “President Trump has not experienced nor been evaluated for a cerebrovascular accident (stroke), transient ischemic attack (mini stroke), or any acute cardiovascular emergencies.”

Mr Trump is not the first president in history to suffer a potentially serious illness, nor to be accused of covering up details about his health.

Franklin D Roosevelt hid the full extent of his polio, while Woodrow Wilson remained in office for two years after suffering a severe stroke. Wilson’s wife Edith acted as a mediator between the largely immobilised president and his cabinet. John F Kennedy hid chronic health problems which saw him admitted to hospital nine times in two-and-a-half years without the public knowing.

As Mr Trump went into quarantine on Friday, his advisers were keen to stress that he was in “good spirits” and being briefed on government matters — though he did not hold a scheduled call with state governors, delegating the task to Mr Pence instead.

Some worry that whatever happens with Mr Trump’s health over the next few days, the details will be hidden from the public.