I first came across Virtu Financial (“Virtu” or the “Company”) back in 2017 while conducting research on electronic trading. For those of you who have been following Virtu, you may recall Bloomberg’s sensational coverage on Virtu in the article – Virtu Never Loses (Well, Almost Never), which really stoked my interest in the Company.

As clued in by the title and highlighted in the article, the Company never loses money from 2009 to 2014 except for only one day.

Since then, I’ve always wanted to initiate a position in Virtu’s stock (VIRT) given the impressive feat mentioned above – but, I never did so. My thinking was that, silly as it may sound, perhaps NOT losing money on daily basis, is a pre-requisite for a market maker rather than a feat. After all, if there is one thing that is close to a sure way to make money in the market, it is by being a market maker and charging fees (i.e., the spread) on the market bids and offers.

After casually following the stock and the Company for a few years without pulling the trigger, I am now examining two possible long term investment theses in Virtu from portfolio management point of view. Now seems to be the right time to look at Virtu again in light of recent market turbulence and the fact that the Company and the stock have more track record in the public market, after ~5 year since its IPO.Investment Thesis

1. Holding Virtu as “hedge” against volatility

From what I understand, investors mostly see Virtu as a hedge against volatility. As mentioned, the Company makes money on bid-ask spread of financial securities primarily equities, fixed income, futures and FXs. This means that higher volatility (therefore bid-ask spread) and higher trading volume are favorable for Virtu.

A snapshot of from Virtu’s May. 2020 Investor Presentation neatly illustrates the Company’s operating segments and their revenue drivers. 4 out of six 6 products and services contributing 88% to the total revenue, are driven by trading volume and volatility of the markets in which they are offered. 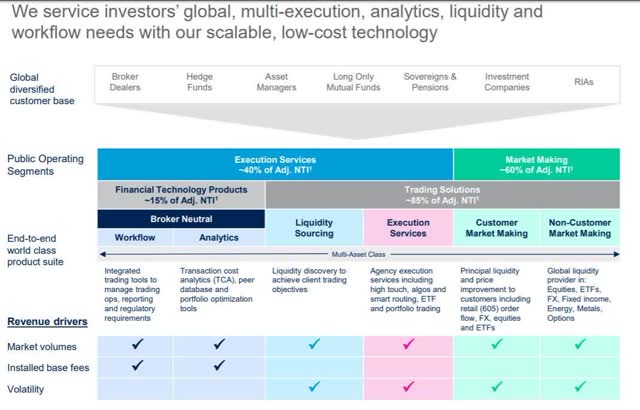 In fact, nothing makes the above point clearer other than the statement from Douglas Cifu, the CEO of Virtu as reported by Bloomberg. To wit:

Cifu also said he hoped President Trump would keep tweeting — which can spur volatility — as “that’s a good thing for our business.”

So, owing to the nature of the business, the investment thesis that is to hold Virtu as a hedge against market volatility actually makes sense. The movement of VIRT also seem to support the argument as depicted below. VIRT rallied when VIX shot up, and when VIX retraced, so did VIRT (tongue twister not intended). 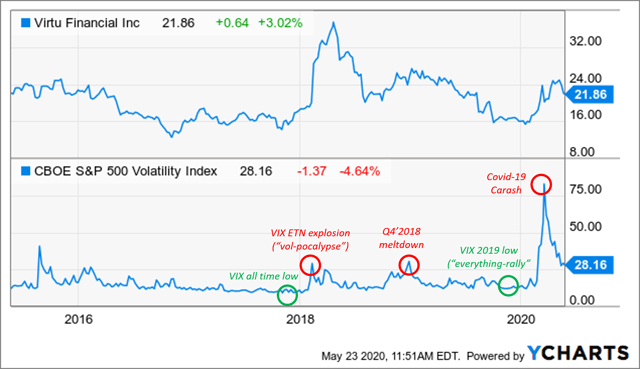 Quantitatively, the potential for VIRT to offset the loss of portfolio value during market downturn is as indicated by VIRT’s positive correlation to VIX, and negative correlation to the market (SPY). These coefficients are computed based on monthly return of the assets over 5 year period.

I think it is also worthy to note that during period of significant turbulence in the market, VIRT’s correlation to VIX/SPY grew stronger/more negative as indicated by the 12-month rolling correlation below. 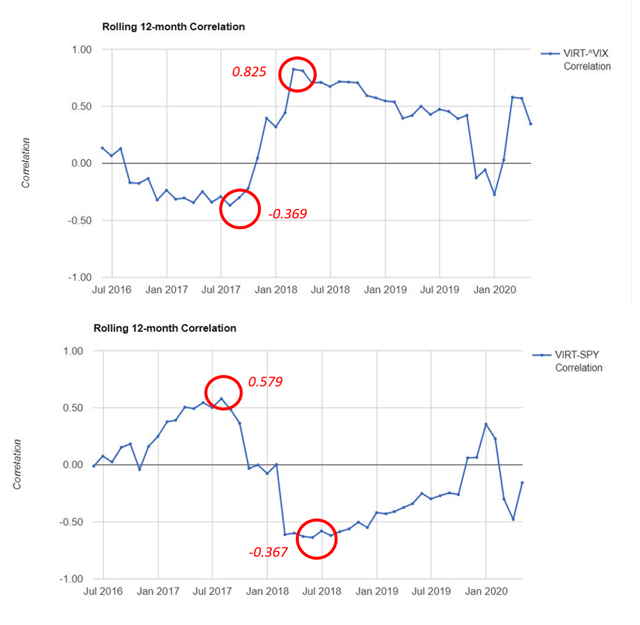 This correlation has allowed VIRT to outperform the market in recent Covid-19 crash. Also, as announced in the recent Q1’20 result, the Company has made a whopping $784 million in adjusted net trading income during the quarter alone, an amount that is equal to what the Company made in the last 3 quarters of 2019. 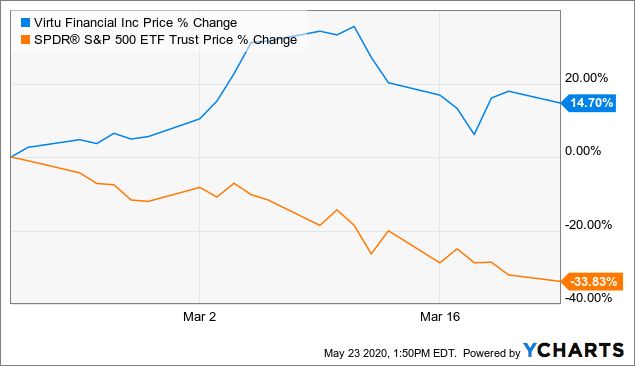 Therefore, even without going further into back-testing and weight optimization, it is safe to say that by including VIRT in the portfolio, an investor could potentially bring some stability during market gyration in line with the aforementioned hedging thesis.

2. Holding Virtu as an income play

In the low interest rate environment that has prevailed post-GFC, investors are willing to look at unconventional avenue for yield and Virtu has made it to the list. The company has been consistent in paying $0.24 of dividend per share each quarter since Q3’15.

In addition, VIRT has been trading mostly in the $16 –$24 range since IPO and this has been favorable in maintaining its relatively high dividend yield given the constant dividend amount being paid out each quarter. At the time of this writing, Virtu’s forward yield is at 4.39% and it has an average yield of 5.23% in the last 4 year, based on Seeking Alpha’s data.

As a market maker, the idea of Virtu being a regular dividend payer makes sense. This is because the market has a natural (long term average) level of volatility as well as trading volume. Therefore, given a constant efficiency in the trading algorithm deployed by Virtu, it can be expected that its market making operation would be able to extract a consistent amount of revenue from the bid-ask spread.

This idea is also true for Virtu’s execution business which is dependent on market volatility and trading volume that give rise to a certain level of portfolio turnover among Virtu’s institutional clients. The only difference is the form of economic compensation that Virtu receive i.e, bid-ask spread as a market maker vs. commission as a trade executioner.

In addition, Virtu’s business is also significantly different from traditional yield plays which are typically from industries like real estate, telecommunication, energy and utilities. So there’s a diversification benefit too as Virtu’s business is exposed to different economic factors, which adds to the attractiveness of holding Virtu for yield thesis.

However, I will be closely monitoring the sustainability of the dividend in relation to long term debt level, given that the payout ratio based on EPS and FCF/share in prior years were quite high.

But at this point in time, I’m willing to tolerate it due to my understanding that cyclicality in profit level and therefore payout ratio, should be expected given then mean-reverting nature of volatility. Plus, the Company seems capable to manage its net-debt level which has remained steady since IPO.

Other Risks and Considerations

There are of course many ways to hedge and receive income. At portfolio level, the most important diversification and allocation decision is at asset class level. While the thesis around Virtu is related to hedging and income, it is not a full substitute to holding bonds and other traditional fixed income instruments even though VIRT’s features such as range-bound trading, consistent yield, and negative correlation to the market could affect the portfolio the same way as holding bond ETF such as AGG could.

Also, unlike bonds which are safer due to their higher legal claim on a company’s assets, VIRT has not yet been through a prolonged recession and bear market. So it is hard to say whether the relationship to VIX and SPY as in Exhibit 3 and 4 will hold.

It is also important to note that VIRT’s free float and trading volume are rather low, which could be seen as ironic for a market maker. The table below is from Bloomberg. Data from Refinitiv on the other hand shows free float of only 60%.

In my opinion, a small float and trading volume could mean that there is a possibility for price movement to be erratic and goes against the established correlation to VIX and SPY. Therefore, it is important to keep an eye on the trading pattern and the aforementioned correlation as it form the basis of the hedging thesis.

But on the plus point, VIRT has a strong institutional ownership and they typically hold shares for the long term instead of trading them which could partly explain the low trading volume. It is also interesting to note that these institutions increased their position in VIRT in late 2019 while cross-asset volatility were crashing due to the the “everything rally”. 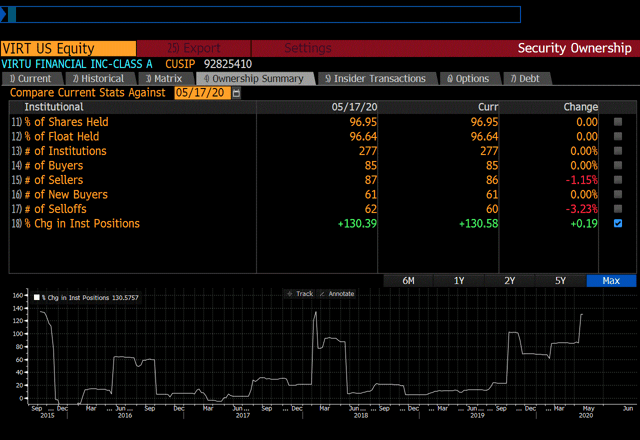 With all the above said, I now think that there is a strong value proposition of having VIRT in my portfolio which is why I recently initiated a position in the stock. I plan to hold VIRT for the long term as I like the business and the management team, which I believe most Virtu’s followers on Seeking Alphas is aware of.

Throughout the holding period, I plan to implement tactical allocation strategy which is to overweight VIRT when VIX is at a local low, and quickly reduces my position to normal level once the anticipated VIX-driven spikes materialized. In the meantime, I’m more than happy to collect the dividend which I view as being paid to wait to make profit on tail events, while helping to effectively reduce the cost of hedging my equity holding.

I think this strategy is best as it could achieve both the investment thesis of hedging, while mitigating the risk and magnitude of under-performance against the market (SPY).

To elaborate, VIRT has under-performed the market since its IPO. So, a hypothetical investor who owns only SPY and VIRT in its equity allocation would also under-perform on absolute return basis. This under-performance is as simulated below. 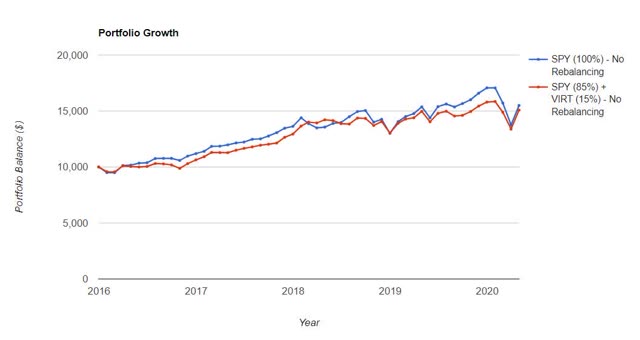 Exhibit 9 – Source: Portfolio VisualizerI believe that the under-performance is due to the fact that VIRT revert to its original level (drift downwards) after any VIX-driven rallies while the market continues to march upward. This could be avoided if the the investor takes profit on any VIX-driven rallies and reinvest in the market and vice versa. In other words – the key to avoid under-performance is to re-balance. This is simulated and shown below. Monthly re-balancing is chosen since VIX-driven rallies of VIRT typically do not last for more than a month.

While the tactical allocations strategy entails more work and monitoring, I for one this it is definitely worth it since the re-balanced portfolio of SPY/VIRT perform better than SPY on both absolute-return (OTC:CAGR) and risk-adjusted basis (Sharpe ratio).

Thanks for reading and good luck!

Disclosure: I am/we are long VIRT. I wrote this article myself, and it expresses my own opinions. I am not receiving compensation for it (other than from Seeking Alpha). I have no business relationship with any company whose stock is mentioned in this article.