The first time Aksana saw a stun grenade explode on the streets of Minsk she was shocked. But after months of braving an increasingly violent crackdown from Belarus’s security forces to protests against autocratic leader Alexander Lukashenko, she has almost got used to it.

“Now you think: ‘Oh, a grenade’,” said the 47-year-old, who asked that her full name not be used. “When you’re used to seeing and hearing it every Sunday, it’s not so shocking any more.”

Angered by Mr Lukashenko’s claim to have won a landslide victory in a deeply flawed presidential election in August, hundreds of thousands of Belarusians have taken to the streets for almost four months to demand his departure. With no let-up even as the world’s attention has been drawn away by the second wave of the coronavirus pandemic and US elections, the protests are the most serious challenge Mr Lukashenko has faced in his 26 years in power.

At the height of the protests in August, as Belarusians flooded on to the streets and Mr Lukashenko was booed by workers at a state-run automotive plant, it briefly seemed possible to some of his opponents that the 66-year-old former collective-farm boss might be ousted.

But as winter looms, the eastern European nation is in stalemate. The EU, UK and US have imposed sanctions on Mr Lukashenko and other officials over the election and subsequent crackdown. But backing from Russian counterpart Vladimir Putin at the peak of the protests helped Mr Lukashenko cling on and, after a brief lull, the security forces have embarked on an aggressive campaign to intimidate his opponents.

“At first we were very optimistic because we thought there would be a revolution in a matter of days or weeks. Now everyone understands that it will take longer,” said Aksana. “We were shocked by all the violence from the police and KGB . . . and it’s still going on.”

As well as grenades, police have used water cannons and beatings to deter protesters, and threatened to use live rounds. Thousands of people have been detained, and in one case that sent shockwaves through the nation, a young opposition supporter, Raman Bandarenka, died after reportedly being beaten by security forces. There has also been a clampdown on journalists.

“It’s just random violence against people, [even those] who are not at protests. So you can go to the supermarket, go out of your apartment, and if you [happen to] go past a protest you can be beaten or detained, or killed or injured,” said Eugen, an opposition supporter from Minsk.

Although protests still take place each weekend in Minsk — thousands joined the latest round of demonstrations which were held in numerous locations around the capital on Sunday — in some cities the brutality of the crackdown has begun to have a chilling effect.

Lena Vasilkova, a teacher from Mogilev, said that apart from a march in memory of Bandarenka, large-scale protests had fizzled out in the 350,000-strong city in Belarus’s east. But she said that, despite this, security forces still patrolled the city centre on Sundays, the day when the biggest protests have generally taken place.

“It’s really scary. I don’t remember when I last really went to the centre on a Sunday. I just try to avoid this area,” she said, adding that before the protests subsided, even being in their vicinity was a risk.

“[Earlier in the autumn] I saw some people creating this solidarity chain. I took a picture and sent it to my family chat. My mum went crazy. [She was saying:] What are you doing here? Maybe some police will come. Get away!” 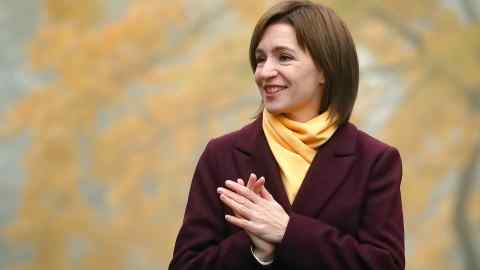 Mr Lukashenko’s regime has also targeted organisations set up to help people caught up in the crackdown. In August, Alexey Leonchik, a London-based project manager, launched a crowdfunding campaign that has raised more than $3.5m to support Belarusians fined or injured in the protests. He began getting messages last month from beneficiaries telling him their accounts had been frozen.

The reason soon emerged: the government alleged that rather than helping victims of brutality, Mr Leonchik was paying people to take part in violent protests at the behest of Svetlana Tikhanovskaya, the main opposition candidate in the August election. Ms Tikhanovskaya was forced into exile under pressure from Belarus’s security services after rejecting the result.

Yet despite the repression, Mr Lukashenko’s opponents are not prepared to give up. If street protests shrank, people would find other ways of expressing their anger, said Eugen. “The protests will transform into other activities, like boycotting food from state organisations, or goods from state factories,” he said. “And I’m pretty sure it won’t change until the government is changed and the president is gone.”

Aksana also plans to continue going to protests, despite the risks. Each time she heads out, she puts a spare pair of socks and a toothbrush in her pocket — the only things she would be able to keep if she was imprisoned, she said.

“Some people will stay home, because they say we need to wait for spring . . . [But] the majority of people understand that we need to go out anyway. It’s the only way we can show the world what is going on,” she said. “I will try to do it to the end.”