Vicor Is A Coronavirus Resilient Growth Pick For 2020 (NASDAQ:VICR)

Power module technology player, Vicor (VICR) is positioned to emerge a winner both during and after the Covid-19 pandemic. The pandemic seems to have accelerated the adoption of digitization across the majority of verticals, which in turn has been driving demand for network services. Datacenter and cloud computing service providers have come to the forefront to tackle this challenge. Vicor is now playing an integral part in supporting the data center industry to quickly ramp up the required infrastructure.

Vicor was unjustifiably punished in March 2020, along with the overall market. However, investors seem to have now recognized the company’s long-term potential. The stock is already up by 31.19% from its 52-week low of $26.50. And with data centers now gearing up to upgrade to 48V standard, there is definitely much upside potential left in Vicor in the next one to two years.

Vicor is all set to benefit from secular trends in the economy.

Today, we are seeing an unprecedented rise in demand for intelligent digital services across all walks of life. This is going to become the order of the day, considering the need to minimize human interaction during these pandemic times. Since a vaccine not expected before early 2021, these tech-enabled products and services will most likely cause a permanent change in overall consumer behavior.

AI (artificial intelligence) market is now expected to be worth $202.57 billion in 2026, which implies an astounding 33.1% CAGR (compounded average growth rate) from 2018. The backbone of these complex artificial intelligence processors is huge amounts of data, managed by data centers. Datacenters are huge power consumers and accounted for almost 1% of the global electricity consumption in 2018. But this number pales in front of the rising workloads processed by these data centers, all thanks to an increased focus on power consumption efficiency. Vicor, a leading player in power conversion technology, has been one of the key suppliers of high-density power solutions to these data centers.

Power conversion technologies are required to efficiently convert DC (direct current) and AC (alternative current) voltages as it flows from the power grid to the servers. The current may be required to be converted multiple times. Power conversion technologies aim for optimal operation of the supplied processes and minimal power loss in the form of heat. 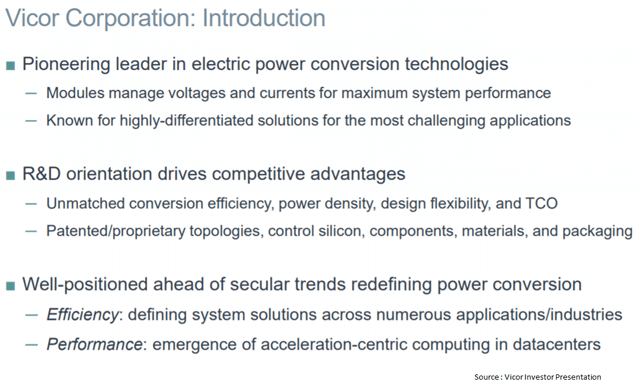 Lately, there has been an increasing demand for 48-volt power conversion technologies in areas such as electric vehicles, AI, and data centers. 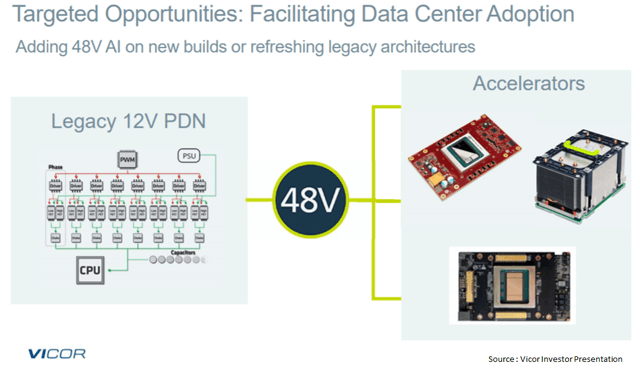 EDN has done a remarkable job of explaining how eliminating the 48V/12V intermediate power conversion stage in the traditional power transmission path to the servers. The need for energy efficiency has become even more urgent, as data centers struggle to control expenses as they scale up rapidly to grab market share.

Vicor’s power-on-package systems are increasingly used to support the last inch of high current delivery in complex GPUs. To reduce power losses in the form of heat during current delivery, the industry has developed point-of-load power architecture. GPU performance and power efficiency are further improved by Vicor’s power-on-package system. A detailed technical explanation of the process is given here.

The rapid transition to 48V systems is a major growth driver.

To track the growth prospects of any company, it is essential to have a fair judgment of the growth potential of its end markets. The global deep learning chipset market is one of the key customer segments for Vicor. According to ReportLinker, this market is now expected to grow at a phenomenal CAGR of 37% from 2019 and be worth $24.5 billion by 2025. Since deep learning computations require huge amounts of data processing, GPU microprocessors are well-suited to these tasks. 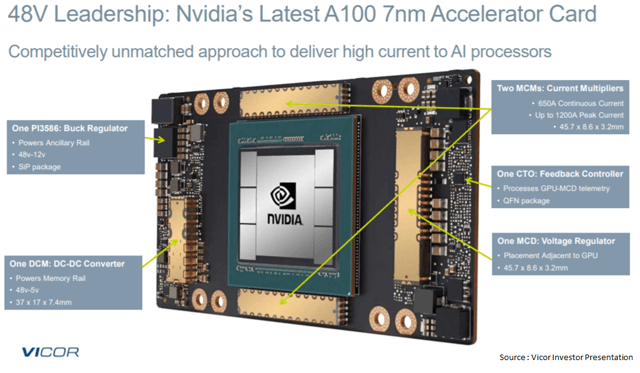 Nvidia (NVDA) is emerging as a major winner in the current environment. The company’s DGX-2 GPU has already made major inroads in the 48V system market. Now, Nvidia’s recently launched A100 GPU, based on next-generation Ampere GPU architecture, is also being increasingly shipped to customers across the world. Since Nvidia is a market leader in the GPU space, this launch will most likely accelerate the transition of the public cloud and hyper-scale operator industry to high-performance GPU processors powered directly from 48V.

Vicor is well-positioned to leverage this emerging opportunity in power distribution networks space. The company has already has invested up to $500 million in the last 15 years in R&D and has developed an extensive patent portfolio covering proprietary technologies associated with power modulation and power packaging. In May 2020, the company also announced launch of 4609 ChiP-set to support high-performance GPUs with 48V direct power supply. The company dominates the 48V power solutions segment and stands to become the power solutions player of choice for Nvidia as well as other players in the high GPU space. 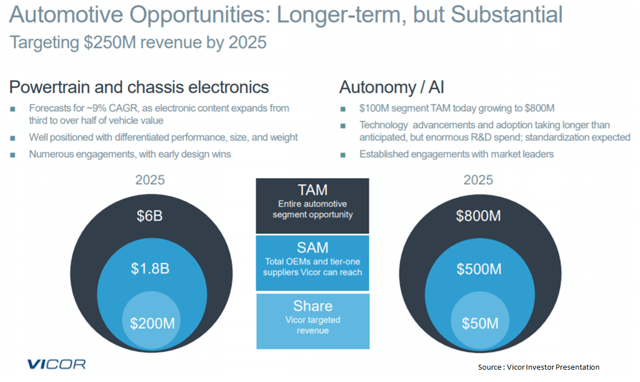 Besides AI-enabled data centers, the automotive sector which includes mid-hybrid and fully-electrified vehicles present an incremental revenue potential of $250 million by 2025.

There is also significant untapped revenue opportunity for Vicor in areas such as 5G infrastructure, satellite communications, defense electronics, and lighting.

The company has reported promising metrics in the first quarter of 2020.

In its first-quarter earnings, Vicor’s Advanced Products business reported sequential revenue growth of 9.8% and accounted for 28.2% of the total revenues. The business reported a 9% sequential decline in bookings. However, this was attributed to a large order for commercial lighting in the previous period. Excluding this order, the business has reported a sequential rise of 23% in bookings, which can be considered to be impressive considering the dire state of the economy.

Vicor may be one of the few companies in the market who will not see a trough performance in the second quarter. The company is now seeing increasing demand for its Advanced Products solutions in the second quarter, in line with the rapid demand for new GPUs and data center servers. The company is also reporting a strong pickup in demand for its Brick Products solutions from sectors such as medical equipment and industrials.

The company is also rapidly adding 90,000 square foot at Andover manufacturing facility for its Advanced Products Solutions, to effectively leverage the exploding opportunity in AI and data center space. Vicor Power-on-Package technology is already being used by many cloud players and hyperscale operators. The company’s commitment to capex even in such uncertain times highlights the high confidence it has in witnessing solid demand in the coming quarters.

Investors must consider these risks.

Vicor is trading at PE (price-to-earnings) multiple of 320.89x and a forward PE of 71.68x. Such lofty valuations expose the company to high share price volatility.

Currently, around 71% of the company’s revenues are attributable to the Brick Products business. This business has been reporting a flat to a slight decline in revenues.

Vicor’s top line continues to benefit from secular changes in the economy but margins have come under pressure due to supply chain challenges. While the company expects second-quarter margins to improve, they will continue to be pressured by ongoing product launches.

In the first quarter, Vicor also saw a key partner in reducing the workforce due to coronavirus. This had had a meaningful impact on the company’s operations. Although the company is working to mitigate this impact, such challenges can jeopardize the company’s outlook in the short term.

What price is right here?

According to finviz, the 12-month consensus target price for Vicor is $49.75. I believe that this share price is too low for the company considering the huge growth potential available in current digitization focused global economy. The company had cash and short-term investments of around $82.8 million and zero debt on its balance sheet at the end of March 2020.

Vicor’s offerings are an integral part of the tech-enabled economy. Besides, while the majority of industries are struggling with an uncertain environment, this company has a decent level of revenue visibility. Vicor accounts for more than 80% market share in the AI GPU and ASIC market and has also built up a robust pipeline in automotive space. Hence, despite the high valuations, I believe that this growth stock will rise up to $84 in the next 12 months. I recommend growth-focused investors with above-average risk appetite and an investment horizon of atleast a year to consider adding this stock.

Previous PostNew York City is on track to begin ‘phase one’ reopening on June 8, Gov. Cuomo saysNext PostLed by Tesla, electric vehicle sales are predicted to surge in 2021