Veeva: No Signs Of Slowing Down (NYSE:VEEV)

Veeva (VEEV) is another cloud stock that we believe should provide investors with attractive long-term returns. Veeva has comprehensive and competitive life-science specific cloud solutions across CRM, data analytics, regulatory, content, and more. Having been in the business for 12 years, it has developed a solid brand reputation that enables it to virtually land life sciences enterprises of any size as its clients, effectively making it the market leader. Veeva’s moat and fundamentals are rock solid, and it has been showing no signs of slowing down in recent times, partly accelerated by the COVID-19 related tailwind.

Looking at the comprehensive offering that Veeva has, we believe that it will continue to own the life science cloud solution space for the foreseeable future. Within an industry already characterized by high switching cost and entry barrier, Veeva closes almost all the gaps within the context of digital transformation with the breadth and depth of its offering.

Consequently, adoptions for these offerings have been exceptionally strong, demonstrating their high mission criticalities. Revenue growth, for instance, has been accelerating instead of decelerating. Considering Veeva’s scale and size, such a track record is impressive. Most SaaS companies we have covered typically see growth rate decaying to a more steady-state rate once they reach a certain size, to some extent indicating post-disruption market maturity or saturation. It is not the case with Veeva. Veeva posted a ~$1.1 billion of revenue last year and, currently, has a +$36 billion market cap. However, revenue growth has gone from +20% to +30% over the past two years.

With that in mind, we feel optimistic about its prospect in reaching a $3 billion revenue target by 2025 or roughly an expectation of consistent 30% growth each year. The track record today alone has shown that it continues to disrupt and deliver at scale. Given the strong brand reputation, Veeva has been able to land high-valued deals consistently, effectively driving margin expansion. Operating margin has expanded from just over 25% two years ago to ~38% at present, which further demonstrates a solid profitability lever despite guiding for a lower +35% target operating margin. The COVID-19 pandemic is further accelerating adoptions of its offerings. This month in July alone, it has already landed two key deals. AstraZeneca (NYSE:AZN) went live with the Veeva Vault Clinical Suite project, as it wants to implement remote monitoring for clinical trials. Likewise, VentilatorChallengeUK has also recently adopted Veeva Vault QMS to accelerate ventilator production in the UK.

Our early concern in Veeva was primarily that of competition. In the life science-specific CRM segment, it competes with IQVIA (NYSE:IQV), which leverages the Salesforce (CRM) platform. Other non-life-science specific companies like Box (BOX) can also disrupt its Vault business. AstraZeneca, for instance, is a Box customer, though as we have observed, it has recently adopted Veeva’s offering. Nonetheless, we still think that Veeva still has the upper hand that will insulate it from the competition, even with the extra challenge due to remote working environment recently, given its strong track record in the life sciences:

I think given the depth of relationships that we have, not only with our customers, but this industry in general really enables us to address a remote work environment. I think, relatively more effectively than these are companies that don’t have the depth and the intimacy of relationships that we have with the industry. So I would say Kirk over the last 10-ish weeks, we really haven’t seen any impact to needing to work remotely in terms of our sales processes. 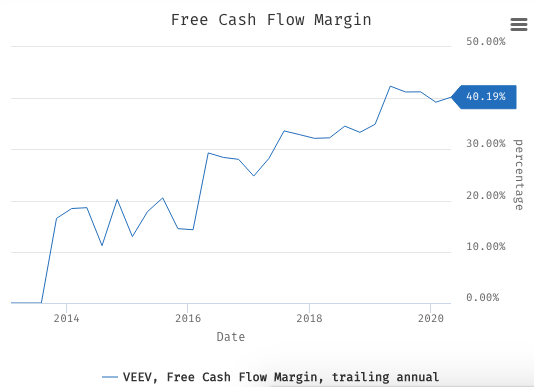 Veeva trades at a +30x P/S, which while looks expensive, presents a fair long-term opportunity, in our view. We found exceptional strength across all parts of the business, as reflected in its rock-solid fundamentals. Veeva is one of the very few SaaS stocks with a rare ability to deliver growth and profitability exceptionally and equally well. Its FCF (Free Cash Flow) margin, for instance, has always been on an upward trend. Even with its +40% trailing FCF margin, it would already pass the rule-of-40. As we account for the +35% revenue growth, Veeva’s rule-of-40 score would be +75, which is impressive by any standard.

Given the tailwind that has already accelerated growth in Q1, we think that Veeva may reach its $3 billion revenue target sooner than 2025, making its $1.39 billion full-year guidance (~26% growth expectation) conservative. Nonetheless, we think that Veeva can grow at least 28% this year. With 150 million shares, $1.4 billion of revenue (considering 28% growth), and maintained ~30x P/S (conservative, as P/S has been on an upward trend), we set a price target at $280 per share at year’s end and maintain an overweight rating on the stock.