One of the Vatican’s most powerful cardinals has resigned suddenly amid an ongoing investigation into the suspected misuse of Catholic charitable funds for investments in luxury London real estate.

The Vatican said on Thursday evening that Cardinal Giovanni Angelo Becciu, the Italian head of the church’s office for appointing saints, had relinquished his rights as a cardinal after a meeting with Pope Francis.

The fall of one of the Vatican’s most powerful figures comes as Holy See prosecutors pursue a sprawling international investigation into the finances of the Secretariat of State, the Vatican’s powerful central administration arm, where Cardinal Becciu served as second-in-command of from 2011 to 2018.

In a short statement the Vatican did not specify why Cardinal Becciu, aged 72, had offered his resignation, which means he loses the right to vote in appointing a future Pope, but the move is exceptionally rare for a sitting cardinal.

Cardinal Becciu was unavailable for comment, but told reporters from an Italian news wire on Thursday evening: “I prefer silence.”

His role at the Secretariat included administering hundreds of millions of euros of charitable donations to the Church by Catholics around the world. In that position in 2014 he personally authorised a $200m property investment using such funds in a large office building being converted into luxury apartments in London’s Chelsea district, in a deal involving an Italian former banker Raffaele Mincione. 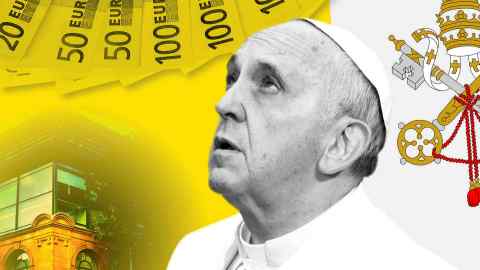 Last year Vatican police raided the offices of its own central administration office and seized documents linked to the London investment, and suspended a number of staff who had worked in the Secretariat, including Cardinal Becciu’s former secretary.

The Holy See subsequently said it believed the London deal had caused the Vatican significant financial losses, and its police raided the private residence of Alberto Perlasca, a senior official inside the Secretariat who had managed the investments under the authority of Cardinal Becciu.

Earlier this year the Vatican arrested and charged Gianluigi Torzi, a London-based businessman who acted as a middleman in the complex London property deal, for what it said was “extortion, embezzlement, aggravated fraud and self laundering”. Mr Torzi, who was held in the Vatican for more than a week before being released, has denied any wrongdoing.

Cardinal Becciu has in public comments repeatedly defended the London property investment, saying it was consistent with standard practice and did not result in the Vatican losing money. Mr Perlasca has also denied any wrongdoing, and has said he was acting on the instructions of his superiors.

Mr Mincione, who has denied any wrongdoing, has launched legal action against the Secretariat in London’s high court, seeking a ruling that he acted in good faith in the deal, which made him a significant personal profit.

The last cardinal to renounce their rights was Theodore McCarrick, the former Archbishop of Washington DC, who did so in 2018 after being investigated for sexual abuse before later being defrocked. In 2015 the Scottish cardinal Keith O’Brien also relinquished his rights as a cardinal following allegations of sexual abuse.