Vanda Pharmaceuticals Is Still Undervalued Despite Strong Performance During The Pandemic (NASDAQ:VNDA)

Vanda Pharmaceuticals (VNDA) is a commercial-stage biopharma that is a long-term holding of mine. I like Vanda’s strong business model and its consistent execution. Vanda is now a cash-flow positive business with no long-term debt which takes away one major risk typically borne by investors in small biopharma companies. In this article, I review Vanda’s progress since my last article in April and present why I still view the company as being substantially undervalued.

Recap Of My Prior Article On Vanda

I published my first article on Vanda on April 27, right in the middle of the initial quarantine and uncertainty over the COVID-19 pandemic in the US. At that time, I noted that Vanda had initiated a clinical trial of tradipitant in COVID-19 patients, but my main focus was on what I view as Vanda’s high-quality business model.

I wrote about how Vanda appeared obviously undervalued, trading at less than 3x current sales, but also about how the company was taking steps to grow sales. These sales were coming from Hetlioz in non-24-hour sleep-wake disorder, which had $143 million in 2019 sales, and Fanapt in schizophrenia in adults, which had $84.2 million in 2019 sales. Vanda also projected promising growth in both of these products in 2020 – $155 million and $165 million for Hetlioz and $85 million to $95 million for Fanapt.

Vanda was also taking steps to expand the market for both of these drugs. I noted that Vanda had just received a Refusal to File letter on its sNDA for using Hetlioz to treat Smith-Magenis syndrome (SMS), but Vanda intended to resubmit after discussions with the FDA and still had 3 other potential late-stage label expansions for Hetlioz. For Fanapt, Vanda had just won a legal battle that secured Fanapt exclusivity through 2027, and the company was researching an additional injectable version of the drug as well as a potential indication in bipolar disorder.

Finally, I noted that Vanda appeared on track to be cash-flow positive in 2020, and the company was already taking steps to reinvest this cash productively in its pipeline assets, tradipitant and VTR-297. Based on all the company had going for it, I calculated that Vanda likely had a fair value in the range of $15.64 to $22.59.

Vanda shares have stayed roughly the same since my last article. On the date it was published, Vanda shares traded for $12.19. On August 11, they closed at $11.97.

Vanda reported its Q2 earnings on August 5, and it’s clear the company has continued to execute well in multiple respects. First, Vanda’s sales of Hetlioz and Fanapt stayed in line with expectations despite the obvious challenges created by the pandemic. Vanda reported $62.2 million in sales of these 2 products, which was a new record high for the company. This was also up from $59.1 million in Q2 of 2019, representing 5% growth year-over-year. These product sales numbers led Vanda to maintain its full-year guidance of $240 million to $260 million in total product sales.

At this point, Vanda is a cash-flow positive company, and it recorded $8.7 million in net income in Q2. Since the end of Q2 2019, Vanda has added $47.2 million to its cash reserves, bringing that total up to $339.8 million. Vanda’s Q2 performance also led the company to up its guidance on end of year cash, now projecting greater than $340 million versus the prior guidance of greater than $320 million.

On top of the positive cash flow and substantial cash position, it’s noteworthy that Vanda doesn’t have any long-term debt on its balance sheet. Consequently, I don’t really see a scenario where Vanda would need to raise dilutive cash in the future which takes away a big risk that investors in small biopharma companies normally bear. At about $650 million, Vanda’s market cap is right at about 2x this year’s likely sales, which is well under the commonly cited industry average of around 5x sales. This also suggests that Vanda’s shares should have limited downside at these levels, even just based on current cash flows and ignoring future growth and the entire pipeline.

Although Vanda’s current valuation seems to largely ignore its pipeline, Vanda has continued to make progress towards adding additional indications and products to its currently marketed ones. 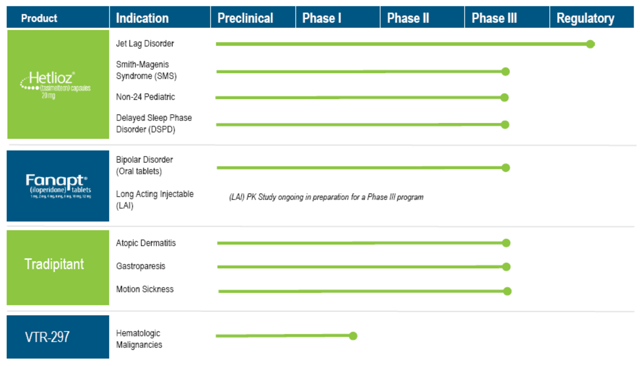 Most significantly at least in the near term, Vanda recently announced that the FDA had accepted its resubmission of its Hetlioz sNDA in SMS. On top of that, the FDA granted Hetlioz priority review and set a PDUFA date of December 1, 2020. As I mentioned in my prior article, I’ve seen peak sales estimates in the SMS indication alone as high as $445 million, which would be hugely significant for the company.

Vanda has an additional 5 other potential indications in the works for Hetioz and Fanapt, but the biggest potential upside for investors is likely in tradipitant and VTR-297. Tradipitant is being studied for treatment of COVID-19 in addition to what is pictured in Figure 2, and I’ve seen estimates for tradipitant peak sales as high as $900 million even without the potential COVID-19 indication.

Vanda also announced recently that the FDA had given a patient authorization to continue using tradipitant for gastroparesis beyond the 12 weeks initially specified in Vanda’s Phase 3 trial. This was particularly significant given that the FDA had previously imposed a partial clinical hold on tradipitant trials beyond 12 weeks. Vanda said in its Q2 update that this Phase 3 trial had resumed recruitment with a target of enrollment being finished in Q1 2021 and that there could be an NDA filing in this indication sometime next year.

Vanda also had a positive post-Phase 2 meeting with the FDA regarding the motion sickness indication and intends to start a Phase 3 as soon as pandemic-related travel restrictions ease. Lastly, VTR-297 is very early stage, but obviously having a cancer drug could eventually add substantial cash flow for Vanda if successful. Most significant for me though is that management is clearly being diligent in using the company’s cash flow to try to grow long-term value.

If Vanda has any major setbacks in its pipeline, it could certainly impact the price of the stock and would have the potential to cause major losses for shareholders. I don’t worry about that possibility overly much here though given how cheap Vanda’s valuation looks even without the pipeline factored in.

As I said above, Vanda looks very undervalued based on the common Price to Sales ratio, but Vanda also looks pretty cheap from a Price to Earnings perspective. Vanda already has positive earnings and they’re likely to grow from here as the company garners additional approvals for Hetlioz and Fanapt as well as eventual tradipitant revenue if approved.

If you consider a 15 P/E ratio to be about average, then Vanda is trading at about 3x that ratio for the present year. If you look a few years down the road though, Vanda drops well below that mark. I then discounted these revenue and earnings estimates at 10% per year to see if the ratios still look appealing in present value terms.

READ ALSO  Cobalt Miners News For The Month Of October 2020

Figure 4: Vanda Present Value Estimates (source: revenue and earnings estimates from Seeking Alpha and my calculations based on that data)

As you can see from Figure 4, both P/S and P/E estimates still suggest a value well above where Vanda is presently trading even after being discounted. The highest of these estimates suggests a fair value about 90% above present levels, and these estimates are largely unchanged from my prior article.

In my view, Vanda presents clear value to a long-term shareholder at these levels. In addition, the PDUFA date for Hetlioz in SMS could be a potential catalyst for an upward move later this year. Vanda is cash-flow positive and has been executing well in the pandemic so far. Although not without risk, Vanda’s potential downside seems fairly limited for now. As I said above, Vanda has been a long-term holding for me, and I have no intention of changing that any time soon.

Disclosure: I am/we are long VNDA. I wrote this article myself, and it expresses my own opinions. I am not receiving compensation for it (other than from Seeking Alpha). I have no business relationship with any company whose stock is mentioned in this article.

Additional disclosure: I’m not a registered investment advisor. Despite that I strive to provide the most accurate information, I neither guarantee the accuracy nor the timeliness. Past performance does NOT guarantee future results. I reserve the right to make any investment decision for myself without notification. The thesis that I presented may change anytime due to the changing nature of information itself. Investment in stocks and options can result in a loss of capital. The information presented should NOT be construed as a recommendation to buy or sell any form of security. My articles are best utilized as educational and informational materials to assist investors in your own due diligence process. You are expected to perform your own due diligence and take responsibility for your actions. You should also consult with your own financial advisor for specific guidance, as financial circumstances are individualized.