The peak season for demand in the animal protein markets runs from late May and the Memorial Day weekend through early September each year. Meat prices tend to appreciate during the late spring in anticipation of the time of the year when barbecues come out of storage, and the demand for beef and pork rises. Meanwhile, 2020 has been anything but an ordinary year in markets, and animal proteins were no exception. Futures prices limped into the grilling season and remained at far lower levels than in past years. Cattle and hog prices reached lows in late April around the time they typically rally.

On June 5, in an article for Seeking Alpha, I suggested that prices were too low with live cattle below $1 per pound and lean hog futures trading at below 50 cents. Cattle have improved, but hogs remain under pressure as of August 7. With only one month to go before the offseason, meat prices remain at low levels for producers, but carnivorous consumers are not enjoying the benefits. On June 4, the iPath Series B Bloomberg Livestock Subindex Total Return ETN product (COW) was trading at $31.81 per share. On August 7, the price of the ETN was marginally lower.

Dislocations because of the coronavirus

The global pandemic created a unique problem for producers and consumers of cattle and hogs. In 2019, the outbreak of African swine fever in China caused a shortage of pork. The Chinese government had to use its strategic reserves of frozen pork to meet requirements. While US production was at a level that supported exports, the trade war between the US and China prevented the flow of pork from west to east.

In 2020, coronavirus caused problems at manufacturing plants in the United States. Some workers became ill with the virus, which caused closures or slowdowns at processing facilities. Producers had nowhere to send animals, causing futures prices to decline to the lowest levels in years during the spring and summer. At the same time, the slowdown in processing caused a shortage of processed supplies. Consumers experience shortages and higher prices during the peak summer grilling season in the US. The 2020 peak season of demand was the worst of all cases for buyers and sellers as producers could not sell, and consumers found limits on supplies and far higher prices than the futures market would suggest.

The events of 2020 could create a period of higher prices in the coming months and years. Producers are likely to reduce the number of cows and pigs they raise, creating supply shortages in 2021 and beyond.

The offseason is on the horizon

The active month October live cattle and lean hog futures contracts reflect the price action at the beginning of the offseason for demand. In most years, the grilling season ends on the Labor Day weekend at the start of September. As vacations end and people go back to work and school, they tend barbecue less. Moreover, as temperatures cool down across the United States, barbecues tend to go back into storage until late spring the following year.

The prices of cattle and hog futures tend to hit seasonal lows during the fall months.

Meanwhile, the dislocations caused by the coronavirus caused live cattle to fall to a low of 81.45 cents in April 2020, the lowest price since 2009. Lean hogs reached 37 cents, which was the worst price for producers since 2002.

While animal protein prices typically decline in late summer and early fall, 2020 is anything but an ordinary year in the meat markets.

Live cattle have been trending higher

Since the April low, October live cattle futures have been steadily recovering.

At below $1 per pound, live cattle were inexpensive. At the start of the 2020 offseason for demand, beef prices were around the levels over the past three years. However, animal protein producers are likely to reduce output because of the pricing dislocations in 2020.

Price momentum and relative strength indicators were over neutral readings at the end of last week on the daily chart. Daily historical volatility at 13.09% is at a low level for the beef futures market. Open interest at just below 284,500 contracts at the end of last week has been gently rising with the price of the futures, which is typically a technical validation of a bullish trend in a futures market.

While nearby lean hog futures fell to a low of 37 cents per pound in April, the October contract reached 48 cents. Hogs made a lower low in late June at 46.475 cents in late June.

Price momentum and relative strength indicators were just above neutral readings at the end of last week Daily historical volatility at 34.5% was in the middle of its recent range. At just over 228,000 contracts, open interest has been stable.

We are moving into the offseason at low prices in the hog market and within the range of recent years in live cattle after the recent recovery. We could see prices move lower over the coming weeks as the demand for meats decline at the start of the fall season.

I believe we will see producers reduce their inventories, which could lead to high prices in 2021. I will be looking for opportunities to purchase cattle and hog futures on price weakness for the remainder of this year. The most direct route for a risk position in the meats is via the futures and futures options that trade on the Chicago Mercantile Exchange. For those looking for exposure without venturing into the futures arena, the iPath Series B Bloomberg Livestock Subindex Total Return ETN product (COW) provides an alternative. The fund summary for COW states: 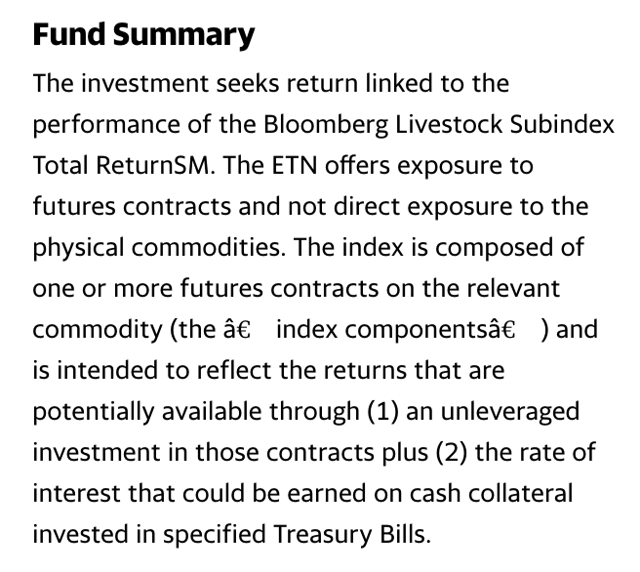 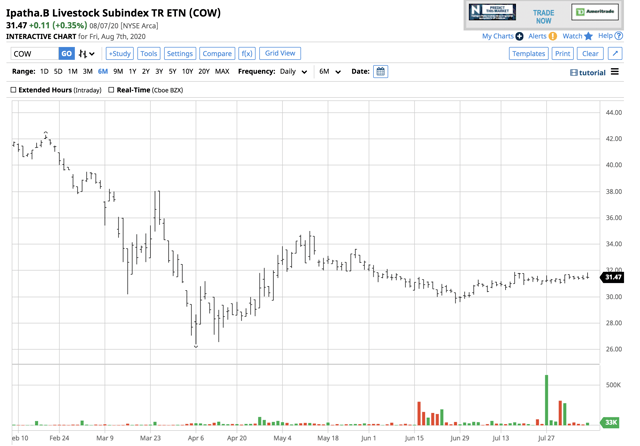 COW has traded in a range from a low of $26.40 per share in early April when cattle and hog prices fell to lows to a high of $35 in mid-May. At $31.47 on August 7, the ETN was just above the midpoint of its trading range.

COW is a product that offers exposure to the meat markets. I will be looking to pick up some inexpensive shares over the coming weeks if the fall season brings lower animal protein prices.