It has been one heck of a wild ride in the Weirdest Economy Ever.

The prices of used cars and trucks that are sold at wholesale auctions around the US dropped again in the week ended November 8, compared to the prior week, the 12th week in a row of week-to-week declines that followed a historic 36% spike from April through mid-August, according to data reported by J.D. Power on Thursday. Wholesale prices are now down over 8% from that peak but are still 6% higher than they’d been at the beginning of March. What a historic trip: 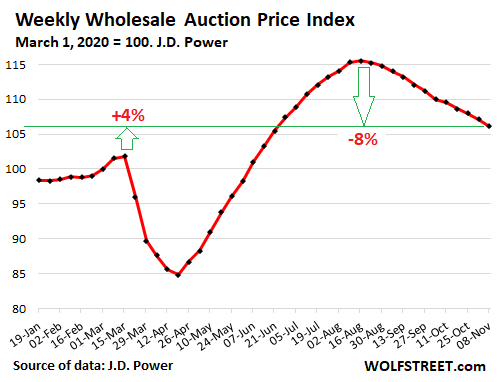 There is typically a seasonal decline in wholesale prices at this time of the year. According to Manheim, the largest auto auction house in the US, the seasonal price decline for a typical October would be 2.1%.

But the typical seasonalities have been upended all around in this stimulus-driven economy, including in the used vehicle market whose wild ride violated every indication of seasonality since March. The price decline over the past four weeks in the J.D. Power data was 3.2%.

Sales volume at auction houses around the country has also been on a downtrend since June. In January and February this year, around 110,000 to 115,000 up-to-eight-year-old vehicles were sold a week, according to J.D. Power data. In March and April, the market froze up. And then it thawed and recovered with volume returning to the old normal in June. But volume has since declined. In the latest week, 80,000 used vehicles up to eight years old were sold at auction, down 19% from what is typical for this period. The decline in sales volume was across all segments: 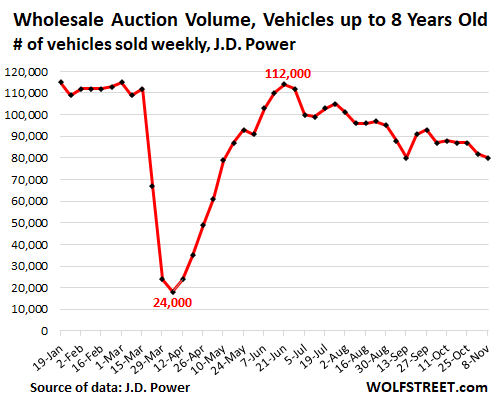 Wholesale supply of used vehicles was at 26 days, up from the normal level of 23 days, according to Manheim.

The combination of declining prices and lower sales volume in the wholesale market, with plenty of inventory on hand, is a strong indication that demand from dealers, who buy at these auctions to replenish their inventories, is waning – at least at these prices. Ultimately, demand is a function of price.

What these dealers are facing is a retail market that had gone haywire. Weirdest economy ever. During the three-month period of July, August, September, retail prices of used cars and trucks spiked by 15.1%, according to the Consumer Price Index data. The 6.7% spike in September alone was the biggest month-to-month jump since February 1969.

But in October, used-vehicle retail prices ticked down 0.1%, based on the Consumer Price Index for Used Vehicles, released by the Bureau of Labor Statistics on Thursday: 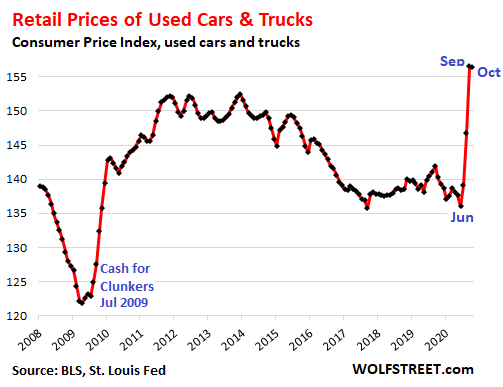 That the CPI for used vehicles ticked down, rather than further rising, is an indication that these huge price increases in the used-vehicle retail market bounced off a ceiling too, and that the 12 weeks of wholesale price declines have started to work their way into retail prices – just like the wholesale price spikes over the summer had contributed to the wild spike in retail prices.

Retail sales volume of used vehicles in October was down 5% from a year ago, according to estimates by Cox Automotive (which owns Manheim). It appears that the crazy price spikes over the summer have tamped down on sales volume.

Used-vehicle retail inventory, at 44 days of supply at those sales, was back to normal. In other words, dealers in aggregate have plenty of inventory, and in aggregate, sales are slow-ish, struggling with the distorted prices of the past few months in the weirdest economy ever.