The first commercial-scale US offshore wind power project has delayed its application for federal approval in a move that will leave a final decision in the hands of a renewables-friendly Biden administration.

Vineyard Wind, whose turbines would stand 15 miles south of the Massachusetts island of Martha’s Vineyard, is a test case for more than a dozen wind leases in federal waters along the US Atlantic coast.

The 800 megawatt project has been postponed repeatedly during an environmental review by the Bureau of Ocean Energy Management, part of the US interior department.

The delays have frustrated clean-energy advocates who see the nascent US offshore wind sector as critical to removing carbon emissions from the nation’s power supply.

As part of his clean energy strategy, incoming president Joe Biden wants the US to install tens of thousands of wind turbines, a technology Donald Trump has criticised for providing intermittent power and killing birds.

Lars Pedersen, Vineyard Wind’s chief executive, said the impending switch at the White House was “not a factor in our decision” to withdraw the application. 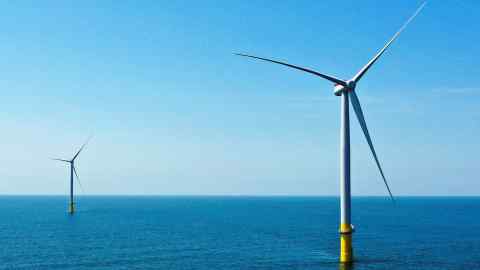 Instead, he said the company had made its move after the government again stretched out its review timeline last month in a move that would have led to final action by January 15. Mr Biden is scheduled to be inaugurated five days later.

Vineyard Wind this week chose General Electric to replace Danish group Vestas as its preferred turbine supplier, meaning it would only need 62 units to reach its target capacity rather than 84 under its previous plan.

By suspending the permit review process for several weeks, Mr Pedersen said, the company would save time as it would be able to make adjustments to its application reflecting the new turbines before the government’s final decision rather than having to go back and revise it afterwards. Vineyard Wind stood firm on plans to start delivering power in 2023.

“If the original timeline had been kept, this opportunity may not have arisen,” Mr Pedersen said.

Vineyard Wind is a joint venture of Copenhagen Infrastructure Partners and Avangrid, a US subsidiary of Spain’s Iberdrola. The more than $3bn first phase project has contracted to sell power to utilities in Massachusetts, generating enough electricity to serve more than 400,000 households and businesses, the company has said.

Boem has issued 16 active wind development leases on 1.7m acres on the outer continental shelf from Massachusetts to North Carolina. The delays at Vineyard Wind have spilled over into other prospective projects.

Orsted, the world’s largest offshore wind developer, said in October its own applications for four offshore wind projects were on hold until Vineyard Wind’s final environmental impact statement was published.

Tim Fox, vice-president at research group ClearView Energy Partners, said that by shrinking the project’s footprint with bigger turbines, Vineyard Wind could address some of the concerns of the fishing industry.

He also said that waiting for Mr Biden to take office “may lessen what the industry may view as incremental risk of a permit denial from the outgoing Trump administration.”

Vineyard Wind said its choice of GE meant “a historic American company will play a vital role in the development of the first commercial-scale offshore wind power in the US”.

GE’s Haliade-X turbines, the world’s most powerful, are manufactured in France. However, Mr Fox said the supplier commitment appeared to be a first step in developing domestic wind industry capability in the US, chiming with Mr Biden’s efforts to create union jobs in the clean-energy sector.