Donald Trump’s handling of the US economy is no longer benefiting his candidacy just weeks before election day, with a Financial Times poll finding more Americans believe the president’s policies are hurting rather than helping the recovery.

The final monthly survey of likely voters before November 3 for the FT and the Peter G Peterson Foundation found 46 per cent of Americans believe Mr Trump’s policies had hurt the economy, compared to 44 per cent who said the policies had helped.

It was the first time this year that a larger share of respondents said the president’s economic policies had hurt rather than helped, and was a significant drop-off since the start of the pandemic. In March, before Covid-19 forced nationwide lockdowns, Americans believed Mr Trump’s policies were helping the US economy by an 11-point margin.

In addition, only 32 per cent of Americans now believe they are better off financially now than they were when Mr Trump took office four years ago — equal to the lowest total since the FT-Peterson survey began 12 months ago.

The FT-Peterson results add to an increasingly dire re-election picture for Mr Trump, who trails Democratic challenger Joe Biden by 9.1 points nationally, according to a Financial Times analysis of recent polls from RealClearPolitics. 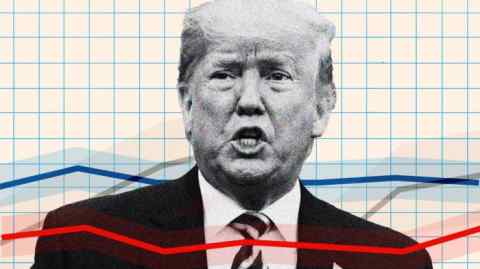 Mr Trump has staked his re-election bid on his handling of the economy, but weekly unemployment claims have started rising again nationwide amid a sharp rise of coronavirus cases in the Midwest. With infections rising to a third peak in the US, the FT-Peterson survey showed increasing pessimism about the prospects of a near-term economic rebound.

Only 20 per cent of Americans believe the pandemic will get better in their community in the next month, by far the lowest percentage since the start of the outbreak, and 65 per cent believe social distancing restrictions should remain in place for at least three months, by far the highest since April.

Although Mr Trump has two weeks to make up ground on Mr Biden, the FT-Peterson survey was taken as millions of Americans began casting their ballots in early voting. At least 29m have already voted early, either in person or by mail, according to the US Elections Project, a database compiled by Michael McDonald, a professor at the University of Florida.

Sixty-one per cent of respondents to the FT-Peterson poll said they would vote in person at an early voting location or by post before election day, compared to 39 per cent who said they would vote in person on November 3. That compares to the 41 per cent of voters who cast their ballots before election day in 2016, according to the Election Assistance Commission.

The FT-Peterson poll, which started a year ago, seeks to follow whether likely voters feel better or worse off since Mr Trump became president in 2016. Ronald Reagan defeated Jimmy Carter in 1980 after asking US voters: “Are you better off than you were four years ago?”

The October FT-Peterson survey found that 32 per cent believed they were worse off after four years of Mr Trump’s presidency, one of the highest totals tallied over the course of the year. The remaining 36 per cent reported no change.

The FT-Peterson Poll was conducted online by Global Strategy Group, a Democratic polling company, and North Star Opinion Research, a Republican group, between October 8 and 11.

It reflects the opinions of 1,000 likely voters nationwide and has a margin of error of plus or minus 3 percentage points. The Peterson Foundation is a non-partisan, non-profit organisation focused on America’s fiscal challenges.