US stimulus negotiations ‘far away’ from a deal

Congressional leaders and White House officials warned on Tuesday that they were still far away from a deal on more economic stimulus.

Nancy Pelosi and Chuck Schumer, the top Democrats in the House and Senate, respectively, have met regularly with Mark Meadows, White House chief of staff, and Steven Mnuchin, US Treasury secretary, since emergency unemployment aid ran out last week.

After talks on Capitol Hill on Tuesday, Mr Mnuchin told reporters that negotiators had agreed to work “around the clock” to “try and reach an overall agreement” by the end of the week so that a bill could be drawn up and approved by the Democratic-controlled House and Republican-held Senate next week.

But the Treasury secretary cautioned: “We’re not at the point of being close to a deal.”

His comments were echoed by Mr Schumer, the Democratic Senate minority leader, who told reporters: “We are still far away on a lot of the important issues, but we are continuing to go at it.”

Mr Schumer said both sides made “concessions” on Tuesday but did not reference specific policies, saying: “In my view, the fundamental disagreement is the scope and depth of the problem and its solution.”

Democrats have called for a $3.4tn stimulus package, but Republicans have said they would only support a smaller deal. Mr Mnuchin said on Tuesday: “We’re not going anything close to $3.4tn.”

Congress has already appropriated nearly $3tn in economic relief since the start of the coronavirus outbreak in the US. But as more states struggle with rising numbers of Covid-19 infections, and benefits introduced in earlier funding packages run out, politicians are under pressure to spend more with less than three months to go until November’s US elections.

Economists have warned a failure to strike a deal could threaten not only the US economic recovery, but also the global economic rebound from the coronavirus pandemic.

While most US lawmakers agree on the need for another round of means-tested direct payments to Americans of up to $1,200 per adult, they disagree over an unemployment benefit extension, as well as legal protections that would prevent employers from being held liable for workers who get infected on the job.

More than 25m Americans have filed for unemployment insurance since Covid-19 began spreading across the US. An extra $600 a week in jobless benefits was introduced in March as part of the $2tn Cares Act, but the enhanced assistance ran out last week.

Democrats want the $600-a-week extra unemployment assistance to continue through at least the end of the year, while many Republicans have argued too many Americans are now earning more from benefits than they were at work. 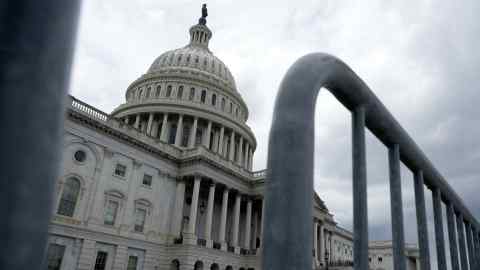 Earlier on Tuesday, Mitch McConnell, the Senate’s top Republican, said while he was “prepared to support” any deal, there were “plenty of Republicans in the Senate who may not vote for a package”.

Mr Schumer said the Republicans were not “unified”, adding: “We don’t exactly know where Donald Trump is. He says a different thing every day.”

The president has repeatedly called for a payroll tax cut, despite Republican lawmakers, including Mr McConnell, saying they would not support such a measure. Mr Meadows and Mr Mnuchin are ostensibly negotiating on behalf of the president.

Before Tuesday’s meeting, the Treasury secretary told reporters he was “absolutely” prepared for Mr Trump to take action on his own if a bipartisan deal were not agreed, but added: “Hopefully we will make progress today and not have to do that.”