US presidential election 2020: what to watch out for tonight

In the hours between polls closing on election day and the first projections from news agencies and broadcasters, politicians and pundits always agree on one thing: “It’s going to be a long night”.

But on Tuesday, a long night could end up morphing into days or even weeks of uncertainty over whether Donald Trump or Joe Biden is the victor in the US presidential election.

That is primarily because there has been a surge in early voting, both by mail and in person. Nearly 100m Americans voted early, many in an effort to avoid catching Covid-19 at crowded polling stations on election day.

This creates complications for state authorities that administer elections, because many are not used to handling large numbers of postal votes and do not have systems in place to complete the counts on election night.

States that have a head start in processing and counting their mail-in ballots before election day are more likely to have a projected winner on the night. But if margins are very close, calls could take longer.

The US election system requires a candidate to win at least 270 Electoral College votes to secure the White House, but a drawn-out counting process might mean the country will have to wait for several days for a candidate to pass that threshold.

In the event of a close election, court battles over the validity of mail-in ballots could delay the final results by weeks.

Though media outlets will call states for Mr Biden or Mr Trump, results are not official until individual states certify them. States technically have until December 14 to finalise the counts.

Still, there will be plenty of twists and turns on election night, and more than a few clues as to who will win, even if the presidential race proves too close to call late on Tuesday night, or in the small hours of Wednesday. Here is the FT’s guide to what to be watching for:

Most pollsters say the six most important swing states are Florida, which has 29 Electoral College votes, Pennsylvania, which has 20, Michigan (16), North Carolina (15), Arizona (11) and Wisconsin (10).

Mr Trump’s victory in 2016 over Hillary Clinton was propelled by razor-thin wins in the upper Midwest states of Pennsylvania, Michigan and Wisconsin.

Four years later, the Trump campaign thinks these battlegrounds are again key to the president’s re-election, and Republican and Democratic analysts alike see Pennsylvania as a “tipping point” state with the potential to decide the overall national outcome.

But Pennsylvania, Michigan and Wisconsin will not begin counting early votes until election day, meaning final results and projections are less likely on the night.

Instead, all eyes will be on Florida, a bellwether state where the victor in 13 of the last 14 presidential elections has gone on to win the White House.

The “Sunshine State” has a well-established system for early voting, and has already started counting ballots, leading most pundits to predict it will be among the first states to be called on election night. Polls in Florida’s western panhandle close at 8pm ET, and the state’s first results are expected to be released shortly after, while the counting process is still under way.

Florida is arguably America’s most politically divided state — most recent statewide elections have been decided by a margin of less than a percentage point. Mr Trump narrowly won there by a 1.2-point margin over Mrs Clinton four years ago.

It is also one of the most racially and ethnically diverse states, with large numbers of black and Latino voters, as well as the largest share of retirees. Results there could signal how demographic groups are likely to vote across the country.

The results in individual Florida counties might also provide a clue to who will win the state and ultimately the race. If Mr Biden wins Pinellas County, a diverse and politically divided region centred on the city of St Petersburg, it would augur well for the Democrat nationally.

The size of Mr Trump’s lead in nearby Sumter County, a Republican stronghold, could also signal how well the president is doing with older voters that helped him win in 2016. Sumter has the oldest median age of any county.

Elsewhere in the sunbelt, North Carolina and Arizona have also begun counting ballots, increasing the likelihood of a result on the night. Polling stations close in North Carolina at 7.30pm ET and in Arizona at 9pm ET.

There is expected to be a partisan split between those voting early and those casting their ballot on election day; according to a recent Pew survey of registered voters, half of likely Trump voters said they would vote on November 3, compared with just one in five likely Biden supporters.

Data experts warn that it would be foolhardy to draw sweeping conclusions from initial results in any given state, especially where the margins are close. Initial returns in states that prioritise the counting of in-person votes may show Mr Trump ahead, only for a later tally of mail-in ballots to reveal a Biden win.

It is also worth keeping a close eye on the exit polls done for broadcast networks in a handful of counties in swing states that could indicate wider trends among key demographic groups.

Mr Trump is not the only national politician seeking re-election. The entire House of Representatives and one-third of the US Senate is up for grabs, with Democrats hoping to retain control of the House and take back the Senate, which Republicans currently hold 53-47.

While the Republicans are expected to pick up one seat in Alabama, several of the party’s incumbents are facing tough battles to hold on to their seats.

They include Susan Collins in Maine, Thom Tillis in North Carolina and Lindsey Graham in South Carolina — all states on the East Coast, where polls close between 7 and 8pm EST.

In Georgia, two Republican senators — Kelly Loeffler and David Perdue — are also seen as vulnerable, though their races are unlikely to be decided on election night due to arcane state laws that mandate a second, run-off election if no candidate gets more than 50 per cent of the vote. 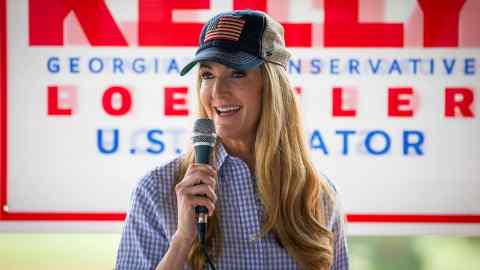 Further West, Republicans Martha McSally in Arizona, Cory Gardner in Colorado and Steve Daines in Montana are all considered vulnerable, while in Michigan, Democrat Gary Peters is facing a strong challenge from Republican John James.

The House of Representatives is not widely seen as up for grabs, with Democrats likely to hold on to their advantage in the 435-member body.

*The graphic about in-person voting has been amended to reflect the size of each group’s stated preferences.