US panel sets out who should get Covid vaccine first

Healthcare workers and care-home residents should receive a coronavirus vaccine first, a key US federal advisory committee has recommended, as the country prepares for a likely rollout in the next few weeks.

Members of the panel, which advises the Centers for Disease Control and Prevention, or CDC, voted on Tuesday to recommend prioritising the two groups in the initial phases of vaccine production when doses remain scarce.

The vote means that if regulators authorise one or more vaccines later this month, most people who work in healthcare settings or live in long-term care facilities should receive doses by the end of the year. But others will have to wait, with public health officials predicting it will take until next summer to have enough vaccines available for everyone in the country.

Jose Romero, the chair of the Advisory Committee on Immunization Practices, said after the vote: “We are using the principles of maximising benefits and minimising harm, promoting justice and mitigating health inequity.”

The Food and Drug Administration is set to decide later this month whether to authorise vaccines made by Pfizer, alongside its German partner BioNTech, and Moderna.

The race to a vaccine is taking place as Covid-19 rages across much of the US. Daily cases hit a record 193,805 in November. Hospitalisations have more than doubled since the end of October to reach a record 96,039.

On Monday the US reported 147,074 new cases and 1,136 deaths, according to Covid Tracking Project data. Those were both below recent averages, probably due to delays in processing tests over the Thanksgiving holiday and weekend.

If the FDA does authorise vaccines this month, distributing the vaccine is likely to be a major logistical and political challenge.

While individual states are responsible for deciding who should be eligible for the vaccine in its early stages, they are likely to follow the CDC recommendations.

Some senior Democrats, however, have urged Joe Biden, the incoming president, to give the federal government more direct control over deciding which vaccine doses go where. Many in the party are particularly concerned that minority groups, which have suffered disproportionately from the disease, are not being given high enough priority.

Members of the CDC committee decided on Tuesday to recommend focusing early doses of the vaccine on those working in healthcare, as well as both staff and residents of long-term care facilities. While they did not single out any racial group, public health experts say that many minority workers will receive a vaccine early given how many work in healthcare and residential care.

The committee defined “healthcare workers” broadly, to include anyone working — paid or unpaid — in a healthcare setting where they could be exposed to people or materials carrying the disease. This means catering, administrative and support staff will be prioritised alongside doctors and nurses.

But the committee urged medical centres not to vaccinate everyone in a particular unit at the same time, given the risk that they could suffer mild side-effects for a day or two afterwards.

Care-home residents will be defined as anyone living in a facility that provides services to those who cannot live independently. 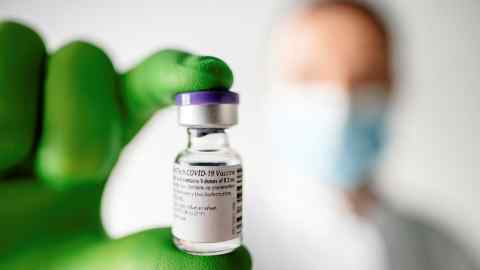 Some of the experts on the panel expressed concern over this particular recommendation, given that none of the vaccines have been tested on those living in care facilities.

Keipp Talbot, a professor of medicine at Vanderbilt University, was the one committee member to vote against the recommendation. She said: “We enter this realm of ‘we hope it works and we hope it’s safe’, and that concerns me on many levels, particularly for this vaccine.”

Dr Talbot said she was particularly worried that the lack of a thorough monitoring process could mean that side-effects among care-home residents could go undetected.

Despite this, the majority of the committee agreed the risk from coronavirus to care-home residents — who account for 1 per cent of the US population, but 6 per cent of cases and almost 40 per cent of deaths — was so great they should be first to receive a vaccine.

Altogether, those in care homes and healthcare workers amount to 24m people in the US. Manufacturers say they expect to be able to produce enough vaccines for about 20m people by the end of the year if they are authorised, meaning most of the two groups should have been offered a vaccination by then.

The advisory committee has not yet voted on which groups to prioritise next. But it has proposed offering doses to essential workers such as teachers, police officers and firefighters next, followed by people over 65 and those with underlying medical conditions.