US officials call for virus vigilance ahead of Labor Day weekend

The Covid-19 outbreaks that have sprung up in the US south and west this summer have continued to show signs of abating, as officials urge caution leading into the Labor Day holiday on Monday to avoid setting off a resurgence of the virus.

Hospitalisations and new cases fell further this week in some of the worst-hit states in the US sunbelt. The number of Covid-19 patients in hospitals in Florida eased to its lowest level since the US state began tracking the data in early July. In California and Texas, active hospitalisations and the rate of coronavirus tests coming back positive over the past week have slipped to their lowest levels since at least June.

However, the latest data on Friday cast a shadow over those trends, with the US reporting 51,513 new cases over the past 24 hours, the biggest daily jump in infections since August 15. States reported a further 998 deaths related to the virus.

Health officials have warned that states in the Midwest, many of which have avoided large outbreaks since the pandemic began, could be at risk for increased spread of coronavirus, partly because of Americans visiting from harder-hit areas.

Anthony Fauci, a top adviser on the White House coronavirus task force, added to warnings that some states have begun to see an uptick in positivity rates, at a time when an increase in travel around the Labor Day weekend could raise the odds of outbreaks in those areas. Deborah Birx, another member of the task force, travelled to Chicago and Detroit this week to meet state and local leaders.

If we’re careless about it, then we could wind up with a surge following Labor Day. It really depends on how we behave as a country

Travel and gatherings during the Memorial Day and Independence Day holiday weekends in May and July may have contributed to an increase in new Covid-19 cases earlier this summer, according to health officials. Dr Fauci and Mike Pence, the US vice-president, were on a conference call with governors early this week to discuss efforts to emphasise guidance on masks and social distancing before Labor Day, which is marked annually in the US on the first Monday in September.

“In order to keep making progress against the virus, we ask all Americans to remain vigilant, especially over Labor Day,” Donald Trump said during a press briefing on Friday.

“We need everybody to be careful, to apply common sense, and do all of the things that we’ve told you to do, as quickly [and] as much as you can: social distancing, wearing a mask whenever the distancing is not possible, and staying with a group that you know. Let’s just try and get through this one weekend,” the US president added.

Dr Fauci named North Dakota, South Dakota, Iowa, Missouri, Arkansas, Indiana and Illinois as US states that are “at risk for surging”.

“If we’re careless about it, then we could wind up with a surge following Labor Day,” he told the Bloomberg news agency. “It really depends on how we behave as a country.”

The US was counting about 22,000 new coronavirus infections a day in late May, according to a Financial Times analysis of Covid Tracking Project data. The seven-day rolling average for new cases rose to 48,000 by Independence Day, or July 4, and peaked at more than 66,000 less than two weeks later, coinciding with summer travel and an increase in testing.

The latest trends have raised hopes that hotspots in the south and west have turned a corner in the fight against coronavirus.

The US has averaged fewer than 40,000 new infections a day in the past week, a decline of a third versus a month ago, and current hospitalisations for Covid-19 have fallen below 35,000. Both metrics are at levels that were last seen at the end of June. Deaths attributed to the virus have climbed by 859 a day on average in the past week, the smallest increase since July 23.

In Florida, there were 3,334 patients in hospital with a primary diagnosis of Covid-19, according to data published on Friday morning. That was down by 102 patients in the past 24 hours and reflects a decline of about half in less than four weeks. Florida’s Covid-19 hospitalisations, which peaked at more than 9,500 in July, have dropped for 11 days running.

Florida tallied 3,198 cases in the past 24 hours. Three weeks ago the south-eastern US state’s daily infection count was more than 6,000.

Coronavirus-related hospitalisations in Arizona, another state that battled an outbreak early this summer, have been on the decline for seven weeks. The state counted 742 patients currently in hospital, down from 809 a week earlier and a high of about 3,500 in July.

At its peak, more than half of Arizona’s intensive-care beds were occupied by Covid-19 patients. That metric has fallen to 14 per cent, the lowest level since early April. 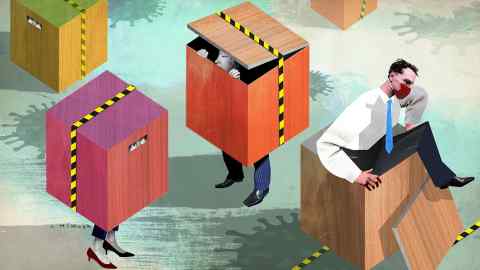 The Midwest region’s tally of confirmed coronavirus cases topped 1m on Thursday, and earlier this week overtook the caseload among north-eastern states — including New York and New Jersey — that were the initial hotspots for the pandemic in the US.

“We’re going to get through this a lot swifter and safer if we’re acting proactively and not reacting,” Indiana governor Eric Holcomb said at a press briefing this week.

Tim Walz, governor of Minnesota, asked residents to “remain vigilant”. “We are not out of the woods,” he said.

Southern US states have confirmed more than 2.8m cases of the virus, while western and Pacific states have reported almost 1.3m infections.

Almost 30,000 people in the Midwest have died since the outbreak began, more than in western and Pacific states, but less than the almost 59,000 fatalities in southern states. The north-east still leads on this metric, with more than 64,200 deaths linked to Covid-19.