Brent Scowcroft, a former US national security adviser hailed as the archetypal “honest broker” who guided America through the conclusion of the Cold War, has died of natural causes aged 95.

A foreign policy expert and mentor to America’s top diplomats, Scowcroft served in both the Gerald Ford and George HW Bush White Houses and became the model for a modern presidential adviser, offering guidance to leaders of both political parties on how to navigate Washington’s bureaucracy and the post-Soviet world.

He won plaudits for guiding the west’s response to the fall of the Berlin Wall and the collapse of the Soviet Union, and the peaceful reunification of Germany and the end of Europe’s divisions remain his most lasting legacy. He also helped form the US-led international coalition that forced Iraqi troops out of Kuwait in 1991.

In a sign of his influence as one of the leading US foreign policy mandarins, Democrats on Friday were as effusive in their praise as the Republicans he served with. Susan Rice, a contender for Joe Biden’s vice-presidential pick and national security adviser to Barack Obama, said Scowcroft represented the “gold standard for national security advisers” and called him “a valued mentor”.

Wendy Sherman, who negotiated the Iran deal under Mr Obama, described him as “one of the wisest, kindest men I have ever known”.

You can never have enough Scowcroft

He returned to the White House with Bush, a close friend. Although he helped orchestrate America’s entry into the first Gulf war to force Iraq’s Saddam Hussein out of Kuwait in 1991, he opposed the 2003 invasion of Iraq, breaking with then-President George W Bush — the son of his former boss.

“Don’t attack Saddam,” ran the headline of a 2002 opinion piece he wrote, arguing there was scant evidence the Iraqi leader harboured weapons of mass destruction or had ties to the September 11 attacks, and that any American invasion risked backfiring.

“An attack on Iraq at this time would seriously jeopardise, if not destroy, the global counter-terrorist campaign we have undertaken,” he argued, adding any effort to destroy Hussein would be expensive and bloody.

Scowcroft’s stature after leaving the Bush White House continued to grow, rivalling even that of Mr Kissinger. New national security advisers routinely sought out his advice on how to guide Washington’s foreign policy bureaucracy.

“You can never have enough Scowcroft,” Mr Kissinger told a journalist in 2013. “But you’re lucky if you get one.”

The West Point graduate once said of himself that his chief skill was not his speed of thought but his ability to “pick out good ideas from bad ideas”.

Richard Haass, who served in both Bush administrations and is now president of the Council on Foreign Relations, said he “set the standard” for all national security advisers, adding he got the balance right between advising and informing the president.

Robert O’Brien is the latest of Donald Trump’s national security advisers who have claimed they wanted to follow in Scowcroft’s footsteps as an “honest broker”. 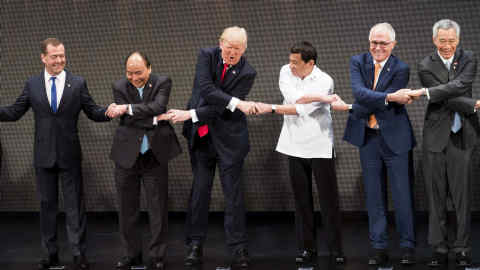 Scowcroft had encouraged Republicans to take up positions in the Trump administration following the unexpected election of the inexperienced president, whom many Republicans were reluctant to work with.

“If you’re asked to serve, please do,” he said. “This man needs help.”

James Baker, former secretary of state who served alongside Scowcroft in the George HW Bush administration, said he “helped guide the United States and the world through the peaceful conclusion of the Cold War”.

“Congeniality, transparency and an even-keel nature were keys to his success, and because of those traits, I knew that he always had my back,” he said.

Scowcroft died at his home in Virginia, according to a family spokesman.