US experts urge caution on giving Covid vaccine to children

Children should not be given a Covid-19 vaccine until there is more data to ensure it is safe, experts have warned the US regulator, as the first group of American teenagers were dosed with a potential treatment for the disease.

Top vaccine scientists on an advisory committee to the Food and Drug Administration said the disease develops so differently in children that any approval should not rely on data from adults.

Most children get no or only mild symptoms, so the risk-benefit calculations of giving them a vaccine are different from those for adults. Yet a small proportion develop a serious condition called multi-inflammatory syndrome, which can be fatal.

Cody Meissner, chief of paediatric infectious diseases at Tuft’s Children’s Hospital in Boston, said he would want to be “very convinced” about the safety of a vaccine before it was approved for children.

“The pattern of disease is quite different in children and lumping them in with adults in this particular illness would cause me some discomfort,” he said at the committee hearing on Thursday.

Other scientists on the committee also warned against combining results from a large adult trial that could prove efficacy and safety with data from a smaller trial involving children, which could only show some safety data and whether their immune systems reacted.

It’s hard for [adolescents] to understand that something really can hurt them. And that’s why the vaccines are so important

Luigi Notarangelo, head of the National Institutes of Health lab of immunology and microbiology, said he was “very concerned” that there was not enough evidence to support the use of a vaccine in children.

“We would need to have safety studies that are long enough in duration to include the potential appearance of [multi-inflammatory syndrome] and actually be large enough to take those into consideration,” he said.

The US has left the door open for vaccine makers to suggest dosing for a paediatric vaccine as part of an emergency approval application.

The FDA’s guidance says vaccine makers should consult regulators when designing trials on children to make sure they take into account how vaccines might work differently among younger people. But it has not set hard rules on the number of children who should be tested or how long they should be monitored before authorisation is granted.

Matt Hepburn, head of vaccine development at the White House operation to accelerate coronavirus vaccines and treatments, said: “As these trials roll out, our intention is to do additional trials to understand [their effect on children].” He did not say how many children he thought would need to be vaccinated at trial to confirm a vaccine’s safety and effectiveness.

The UK has ruled out inoculating under 18s. Kate Bingham, head of the country’s vaccine task force, said the vaccine would be for people over 50.

“If you vaccinate a young, healthy person, by vaccinating them you can cause them some freak harm, that’s a risk-benefit analysis that’s very hard to do,” Ms Bingham said.

Pfizer this month received approval to expand its Covid-19 vaccine trial to children as young as 12, as the only study in the US enrolling children. The company said its focus was on collecting data on safety and immune system response.

Abhinav, the 12-year-old son of a physician at Cincinnati children’s hospital, one of the sites for the Pfizer trial, was one of the first children to get the vaccine when they started with the younger age group last week. He decided to do so after his father had participated in the adult trial. He was more nervous about having to have his blood drawn than possible risks from taking an experimental vaccine.

“They showed me a video how everything really works . . . There was a man who described how vaccines stimulate your immune system just enough to help fight the virus,” he said. “Knowing that it is pretty cool.”

Sharat, his father, hoped he would be getting the real vaccine, rather than a placebo, providing some protection for their family as they head into the winter. He believed he got the vaccine himself because he had a low-grade fever afterwards.

Robert Frenck, a paediatric infectious disease specialist running the trial in Cincinnati, said it was not planning to enrol enough children to test efficacy and would have to rely on the combined approach. 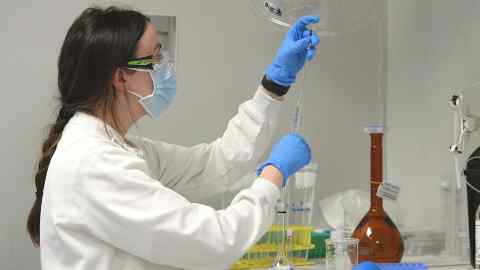 The American Academy of Pediatrics is lobbying for more data on children’s response for the vaccine to be collected quickly — perhaps even ahead of an emergency use authorisation.

READ ALSO  Watch: CNN Admits There Are "Legal & Constitutional" Ways For Trump To Stay In Office

In a letter to the FDA commissioner, the academy said it was “less than desirable” to have a vaccine available under an emergency use authorisation without any data on how it affected children, arguing it was unjust for them to carry burdens of the pandemic, including disrupting their schooling, but not be able to benefit from a vaccine.

Vaccine trials in children are required to show a clearer potential benefit for participants than in adults. Dr Frenck believes the Covid-19 vaccine trials easily meet that bar, because more children have died from Covid-19 than die from flu each year, yet flu vaccinations are recommended for kids in the US.

While Covid-19 did not appear to be as bad in children as it was in adults, “there’s still a significant morbidity and mortality”, he said. “So that’s why we think it’s important to immunise kids.”

Dr Frenck added that vaccinating children may also stop them bringing it home to their older family members, or infecting schoolteachers, especially since it can be hard to get teenagers to stick to social distancing rules.

“The thing about adolescents is that they’re immortal, right?” he said. “It’s hard for them to understand that something really can hurt them. And that’s why the vaccines are so important.”