The US is making a mistake by prioritising nursing-home residents for a coronavirus vaccine, according to a member of the government panel responsible for setting national distribution guidelines.

Keipp Talbot, the only member of the Advisory Committee on Immunization Practices to vote against its recommendations on distributing the vaccine, told the Financial Times on Wednesday that she worried the jabs could prove less effective with care-home residents.

“We know that vaccines typically don’t work very well in residents of long-term care facilities, partly because of comorbidities such as diabetes, and partly because of general frailty,” said Dr Talbot, an associate professor of medicine at Vanderbilt University in Nashville, Tennessee.

“When we are looking at a limited supply of vaccine, we should use our resources to focus on vaccinating staff of those facilities rather than the residents.”

Her comments are a sign of the controversies likely to be generated as governments around the world roll out limited doses of coronavirus vaccines over the next few weeks. And they could fuel the debate over care-home residents in particular, who have suffered disproportionately from the disease.

Things occur in long-term care facilities. People have heart-attacks, strokes, pneumonia. The risk is that if a vaccine has been given, people will assume it is the vaccine, which will knock confidence in them

The US panel, which advises the Centers for Disease Control and Prevention, voted on Tuesday to recommend that healthcare workers and home-care residents receive a coronavirus vaccine first. Although care-home staff are included in the highest priority group, they could be inoculated even more quickly if their residents were not also included.

The UK became the first western country on Wednesday to authorise a coronavirus vaccine, giving the go-ahead to the immunisation made jointly by Pfizer and its German partner BioNTech.

The US Food and Drug Administration will decide this month on whether to follow suit with the Pfizer/BioNTech vaccine and that being developed by Moderna. If it does so, US officials say they expect to have enough doses to vaccinate 20m people by the end of the year.

All of that initial allocation is likely to be used to vaccinate healthcare workers and care-home residents after Tuesday’s vote. While it is up to state health departments to decide exactly who gets the vaccine, they are likely to follow the ACIP guidelines, as they do with other inoculations.

In contrast, the UK has decided not to include care-home residents among the first group to be vaccinated — though more because of the logistical difficulty of delivering the Pfizer vaccine, which needs to be stored at minus 70 degrees Celsius.

Early data from the Pfizer and Moderna trials showed older people tended to suffer fewer side-effects from the vaccines, and Dr Talbot believes this could be a sign their bodies simply are not responding as much to the inoculation. 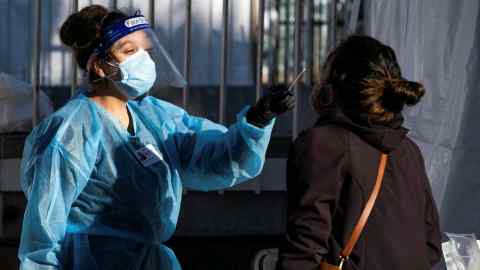 She also said she worried that giving the vaccine to residents of care homes early in the process could spark unwarranted fears about the safety of the shots, given so many of those people will suffer serious illnesses soon after being immunised for unrelated reasons.

“Things occur in long-term care facilities,” she said. “People have heart-attacks, strokes, pneumonia. The risk is that if a vaccine has been given, people will assume it is the vaccine, which will knock confidence in them — and that is something we badly need right now.”

Dr Talbot made some of these points during Tuesday’s committee meeting, but her fellow members believed it was worth taking the risk of vaccinating those in long-term care facilities because so many had died of Covid-19. Residents of such homes make up 1 per cent of the US population, but account for 6 per cent of cases and almost 40 per cent of deaths.