US confiscates Iranian petrol in ship-to-ship transfers at sea

The US has confiscated nearly 1.2m barrels of Iranian petrol that was allegedly destined for Venezuela in a series of ship-to-ship transfers at sea, according to two US officials.

In the first such seizure of its kind, a Greek shipowner agreed to give up the cargo after being contacted by the US, they said, adding the government estimated the value of the haul at $40m.

“This sends a clear signal to the maritime community to avoid any business with the Iranian regime,” a senior administration official told the Financial Times, adding the “flawless” operation was the result of the Trump administration’s “maximum pressure” policy on Iran.

In July, the US Department of Justice filed a civil forfeiture lawsuit for the fuel cargo, naming the ships that carried it as the Bella, Bering, Luna and Pandi, and alleging the petrol was headed for Venezuela.

The lawsuit named an Iran-based person the US claimed was linked to the country’s Revolutionary Guard Corps as the individual who had arranged the shipments.

US prosecutors also cited a text message to the Iran-based person from an unidentified co-conspirator about the Bella and Bering, which read: “The ship owner doesn’t want to go because of the American threat but we want him to go, and we even agreed We [sic] will also buy the ship”.

A judge in Washington approved a seizure warrant shortly after the filing of the lawsuit.

Two US officials named the shipping magnate who owns the four ships as Giorgios Gialozoglou, also known as “George”. A US lawyer for Mr Gialozoglou did not immediately respond to a request for comment late on Thursday.

Last month, Mr Gialozoglou told Lloyd’s List: “We are not party to any conspiracy. We have nothing to do with the IRGC . . . We are not going to break sanctions and we will obey the law. I always want to have a lawful cargo and a lawful destination and that is what I thought we had.”

The US officials said that the vessels were deregistered from their Liberian flags following an effort led by the state department.

The cargo was subsequently voluntarily transferred into US hands at two separate locations — the first in July from two vessels to a single vessel contracted by the US, and the second last week by a similar process. The US departments of justice, homeland security and state, and the coast guard, were all involved.

“We have never done anything quite like this before,” said a US official. 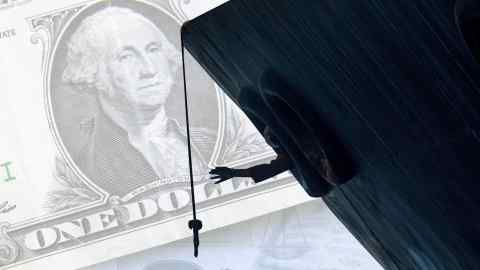 The petrol was on its way to Houston in two vessels set to arrive next month a week apart, according to the US officials.

Hojat Soltani, Iran’s ambassador to Venezuela, said in a tweet in Spanish that the ships were not Iranian and that neither the vessel owner nor its flag had anything to do with Iran, describing claims attributed to US officials as lies and propaganda.

The Trump administration has in recent months stepped up efforts to disrupt Iran’s activities as it has grown increasingly concerned about Tehran’s developing relationship with Caracas.

The US is seeking to push from power president Nicolás Maduro, whom it does not recognise as the legitimate leader of Venezuela.

The Wall Street Journal first reported the US seizure of the Iranian cargo.

Previous PostRabobank: “Just Wait Until We All Get New Woozly Digital Currencies”Next PostTurning Beer Into Energy