US companies rewrite bonus plans to prop up executive pay

Companies are rewriting bonus plans, switching performance metrics and ignoring missed targets so that executives do not suffer a big drop in pay as a result of the Covid-19 crisis — changes that could become controversial with shareholders in the months ahead.

While many executives are set to swallow big reductions in their bonuses after earnings and share prices have tumbled this year, a growing number of boards are taking action, according to investor groups and compensation analysts.

Changes have included adding non-financial metrics to bonus qualifications and excluding months of poor profits during the worst of the pandemic.

“For some investors, this whole experience is the shining example of the mirage of performance-based pay,” said Glenn Davis, deputy director at the Council for Institutional Investors, which represents big pension funds. In good times companies rarely rein in exorbitant executive compensation, he said. “Adjustments tend to go in one direction.”

At least 20 US companies had altered their annual bonus plan to add new goals beyond profits, such as cash flow or operational metrics, according to a September report from Semler Brossy Consulting Group, an executive pay adviser, and more have published changes this month.

At least 10 companies have changed their bonus pay performance period to reward executives and eight added board discretion to determine payouts, the report said.

If executives don’t perform well, then they shouldn’t be getting bonus payouts

Wynn Resorts, the US casino operator, in August changed bonus goals for top executives, including the chief financial officer and general counsel, for the second half of 2020 to reward saving cash rather than generating earnings. The company “significantly reduced target incentive levels” for 2020 and said it intended to reset executives’ long-term performance targets for 2021.

Darden Restaurants, owner of the Olive Garden chain, changed its annual 2020 bonus plan so that the blow to sales the coronavirus pandemic wrought in April and May will not be counted against executives’ annual bonuses. Its bonus plan for 2021 will be based on results for the second-half of its fiscal year with only certain “non-financial” metrics to be considered from the first half. The board will also use its discretion to determine whether executives performed well enough in the first half of fiscal year 2021.

Schlumberger, an oil and gas company whose share price is down 60 per cent since the beginning of the year, said in July it replaced an earnings-per-share metric with an adjusted Ebitda metric for the second half of 2020 as a factor in determining executives bonuses. In July Schlumberger, which is the world’s biggest oilfield services company, said it would cut 21,000 jobs, or about a fifth of its workforce.

Representatives from Wynn Resorts and Darden declined to comment. Schlumberger did not respond to a request for comment.

But the Covid-19 pandemic might be an extraordinary circumstance. Institutional Shareholder Services, an advisory firm, said in a survey published last month that 70 per cent of investors said companies could consider the pandemic’s economic blow when considering pay plan changes. 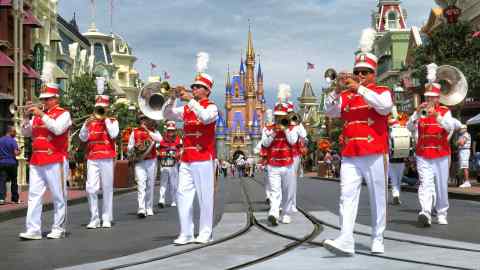 Companies are starting to rewrite long-term bonus plans, too. Eight companies have switched their bonus metrics to reward goals such as cost savings, Semler Brossy said.

Macy’s, the US department store, said this month that it changed its long-term incentive programme to grant executives restricted stock units for the first time instead of stock options, which would only be valuable if its shares rise.

More executive pay changes are expected in the months ahead as companies prepare for their 2021 annual meetings, when shareholders vote on compensation plans.

With aid from the US Treasury and Federal Reserve, big companies are going to weather the Covid-19 recession, said Michael Varner, director of executive compensation research at CtW Investment Group, which represents union-sponsored US pension funds with more than $250bn of assets under management.

“Giving exorbitant amounts of long-term incentives or significantly changing the long-term incentive programme when these companies are not under threat of going out of business, I don’t think that is appropriate,” Mr Varner said.

Previous PostCoronavirus Survives On Banknotes For Up To 4 Weeks, Study Finds, As Cash Usage PlungesNext PostThe Plot Against America