US business lobby groups call for patience over election result

Corporate America’s most powerful lobby groups have called for patience as votes are counted in next week’s election, hours after President Donald Trump said it would be “totally inappropriate” if ballots were still being tallied after election day.

The US Chamber of Commerce, the Business Roundtable and six other groups representing industries from retail to manufacturing issued a rare joint statement calling for peaceful and fair elections and noting that a surge in voting by mail could delay a result for “days or even weeks”.

“The strength of our nation’s democracy depends on the integrity and fairness of our elections,” they wrote: “We urge all Americans to support the process set out in our federal and state laws and to remain confident in our country’s long tradition of peaceful and fair elections.”

Concern that the election results may be delayed or disputed has been growing as record numbers of Americans have voted by mail.

Mr Trump’s call for a winner to be declared on election day was bolstered by Brett Kavanaugh, one of his three appointees on a nine-justice Supreme Court that may be asked to settle any disputed result.

Mr Kavanaugh wrote this week in a Supreme Court case over mail-ballot deadlines in Wisconsin that states should be allowed to enforce strict deadlines for absentee ballots “to avoid the chaos and suspicions of impropriety that can ensue if thousands of absentee ballots flow in after election day and potentially flip the results of an election”.

The eight business groups signalled that their message was not a partisan one, saying they looked forward to working with the next administration and Congress regardless of who won.

But the statement follows a chorus of concern from Corporate America about the integrity of next week’s election and Mr Trump’s commitment to respecting the outcome if he loses, as polls suggest he is likely to do.

The Business Roundtable had issued an earlier statement in July, emphasising that the strength of US democracy depends on the integrity of its elections and encouraging employers to give staff paid time off to vote.

But some investors and campaigners had been disappointed that such groups had not issued stronger endorsements of electoral norms after the president repeatedly refused to commit to leaving the White House peacefully should he lose the election.

ICCR, a coalition of faith-based investors, last week called for BRT members to ensure a peaceful transfer of power, condemn voter intimidation and back up their words with their lobbying spending and political donations.

“Those who choose to remain silent will likely be seen as complicit in the chaos,” it warned.

A letter this week which has been signed by more than 650 other business school academics, urged business leaders “to declare publicly what so many have been saying privately: that President Trump is unfit to lead and is a threat to the Republic”.

Deepak Malhotra, the Harvard Business School professor who organised the letter, told the Financial Times it reflected growing concern about the president’s recent comments casting doubt on the election rather than a liberal bias in academia.

“If we are liberal we’ve been liberal for a long time. We didn’t sign something like this in 2016,” he said: “The pendulum often swings left to right but here’s something that might rip the pendulum off the clock.”

The Business Roundtable’s statement follows election statements by individual chief executives and open letters from groups of executives, most of which have avoided partisanship. 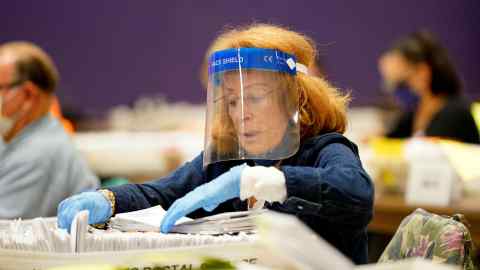 Jamie Dimon, chairman and chief executive of JPMorgan Chase, emailed the bank’s staff last week about the “paramount” importance of respecting the democratic process, while more than 260 executives, including LinkedIn’s Reid Hoffman and Bank of America’s Anne Finucane, signed a statement warning that the health of the US economy depended on the strength of its democracy.

Civic Alliance, a non-partisan group that has mobilised companies to get out the vote, has enlisted hundreds of executives, including Gap’s Sonia Syngal and Microsoft’s Brad Smith, in a similar campaign calling for elections to be “fair and transparent”.

One chief executive, David Barrett of Expensify, issued a more explicit plea for the 10m users of the expenses management company’s software to vote for Mr Trump’s Democratic opponent. “Anything less than a vote for [Joe] Biden is a vote against democracy,” he said, arguing that another term for Mr Trump “will damage our democracy to such an extent, I’m obligated on behalf of shareholders to take any action I can to avoid it”.

“American democracy is undergoing a test right now. For business it’s also a test,” said Aron Cramer of BSR, a group advising companies on their social responsibilities: “Business leaders tend not to take partisan positions but I think it’s time for them to make clear that this could go off the rails.”