US appeals court throws out antitrust ruling against Qualcomm

A US appeals court handed Qualcomm a victory on Tuesday, reversing an earlier ruling against the chipmaker in a case brought by US antitrust regulators.

The ruling from the 9th Circuit Court of Appeals scuppered a win for the Federal Trade Commission last year before a lower court, which found that Qualcomm commanded “unreasonably high royalty rates” for its intellectual property and ordered it to renegotiate licensing deals.

Qualcomm shares were trading 4 per cent higher after the decision.

The FTC — whose case had been supported by Apple, Samsung and other companies — had accused Qualcomm of overcharging for patents that smartphone makers have to buy to meet industry standards for cellular communications.

Qualcomm does not dispute its dominance but has argued that the licensing fees it charges to smartphone makers stem from its innovation.

The appeals court said in Tuesday’s ruling that Qualcomm’s “no license, no chips” policy “did not impose an anti-competitive surcharge on rivals’ modem chip sales”, nor did it undermine competition.

Ian Conner, director of the FTC’s bureau of competition, said in a statement that the ruling was “disappointing” and that the regulator was weighing its options. 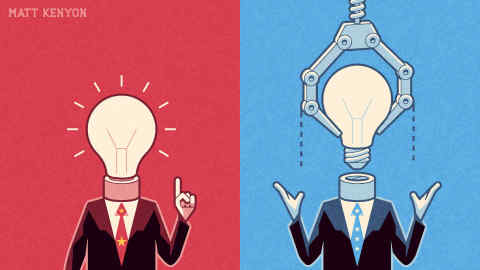 Last year, Apple and Qualcomm brokered a deal to resolve a range of high-profile intellectual property and contract disputes around the world, which had turned into one of the costliest and longest-running disputes in the tech world. The broad settlement gave the chipmaker a $4.7bn revenue boost.

Since mid-March, Qualcomm shares have risen more than 80 per cent to a record high, valuing it at $125bn.

The court decision comes two weeks after Qualcomm resolved a long-running dispute over patent licences with Huawei, the world’s largest smartphone maker. “We are now entering a period in which we have multiyear licence agreements with every major handset [maker],” Steve Mollenkopf, Qualcomm’s chief executive, told analysts at the time.