US accuses Giuliani ally of being ‘active Russian agent’

The US Treasury on Thursday imposed sanctions on a Ukrainian politician who has helped Donald Trump’s personal lawyer Rudy Giuliani investigate Joe Biden, describing the official as “an active Russian agent”.

Andrii Derkach, a pro-Russian Ukrainian member of parliament, was interviewed by Mr Giuliani, who made claims in social media that Mr Biden engaged in corrupt activities in Ukraine while the Democratic presidential nominee was serving as vice-president under Barack Obama.

The Treasury described Mr Derkach as “an active Russian agent for over a decade, maintaining close connections with the Russian intelligence services”. It said he had “directly or indirectly engaged in, sponsored, concealed, or otherwise been complicit in foreign interference in an attempt to undermine the upcoming 2020 US presidential election”.

Mr Giuliani, who was not mentioned in the department’s statement, earlier had tried to dig up dirt on Mr Biden with the help of two Soviet-born émigrés, Lev Parnas and Igor Fruman. After the two men were charged in the US with making illegal campaign donations, Mr Giuliani sought assistance from a new group of Ukrainian political fixers and politicians including Mr Derkach. 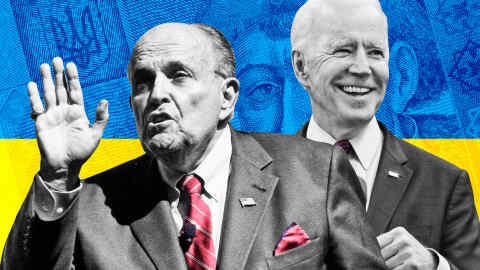 “From at least late 2019 through mid-2020, Derkach waged a covert influence campaign centred on cultivating false and unsubstantiated narratives concerning US officials in the upcoming 2020 presidential election, spurring corruption investigations in both Ukraine and the United States designed to culminate prior to election day,” the Treasury said.

“Between May and July 2020, Derkach released edited audio tapes and other unsupported information with the intent to discredit US officials, and he levied unsubstantiated allegations against US and international political figures,” the statement added.

Mr Derkach has in recent months released audio tapes of phone conversations made between Mr Biden, then vice-president, and Petro Poroshenko, president of Ukraine at the time. He claimed the recordings demonstrated wrongdoing by both Mr Poroshenko and Mr Biden.

Responding to the Treasury Department’s decision, Mr Derkach in a Facebook post pledged to continue releasing evidence of what he described as “Democorruption” and to defend his interests and reputation in court.

There was no immediate comment from Mr Giuliani or Mr Trump.

Steven Mnuchin, Treasury secretary, said in the statement: “Andrii Derkach and other Russian agents employ manipulation and deceit to attempt to influence elections in the United States and elsewhere around the world.”

He added: “The United States will continue to use all the tools at its disposal to counter these Russian disinformation campaigns and uphold the integrity of our election system.”

The Treasury also imposed sanctions on three Russian nationals it identified as employees of the Kremlin-linked Internet Research Agency, a troll farm sanctioned by the US. They are Artem Lifshits, Anton Andreyev and Darya Aslanova.

Under the action, property held by the sanctioned individuals would be blocked and “US persons are generally prohibited from engaging in transactions with them”, the Treasury said.