The European Commission’s chief used her annual State of the Union speech to warn of the risks of closer ties with President Vladimir Putin’s Russia and urge China to live up to its commitments on climate change.

Ursula von der Leyen warned on Wednesday that international relations were paralysed as world powers reject institutions or take them hostage. She called for an improvement of transatlantic relations and a new beginning with the UK — while taking a swipe at Boris Johnson for his decision to breach the Brexit withdrawal agreement.

The wide-ranging critique highlights the EU’s determination to cling to its self-image as an upholder of laws and norms — and the squeeze it faces in a world of tensions between great powers.

“Major powers are either pulling out of institutions or taking them hostage for their own interests, ” Ms von der Leyen told the European parliament in Brussels, in her first State of the Union speech since she took office in December.

To those that advocate closer ties with Russia, I say the poisoning of Alexei Navalny with an advanced chemical agent is not a one-off

Ms von der Leyen issued a tacit rebuke to efforts by leaders including French president Emmanuel Macron to try to forge a closer relationship with President Vladimir Putin’s Russia. She said the commission would bring forward proposals for a US-style Magnitsky Act for sanctions against people involved in human rights abuses worldwide.

Her language on Russia echoed that of German chancellor Angela Merkel following the poisoning of Russian opposition activist Alexei Navalny with a novichok nerve agent.

“To those that advocate closer ties with Russia, I say that the poisoning of Alexei Navalny with an advanced chemical agent is not a one-off,” said Ms von der Leyen, a former German defence minister. “We have seen the pattern in Georgia and Ukraine, Syria and Salisbury — and in election meddling around the world. This pattern is not changing.”

During Ms von der Leyen’s speech, Russia’s mission to the EU criticised in an email a “rapidly growing information campaign in the EU — both in official circles and media” over the Navalny case.

Ms von der Leyen called for re-engagement with US. “We are ready to build a new transatlantic agenda,” she declared, pointing to trade, technology and taxation as areas of improvement in bilateral relations. 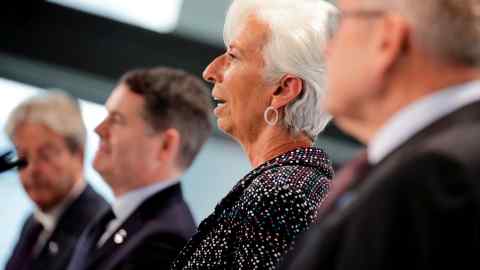 Brussels last month announced the removal or reduction of tariffs on a narrow range of products including imported US lobster, but it faces an uphill battle seeking a thaw in relations given Mr Trump’s hostility to the EU — a situation that also partly hinges on the outcome of November’s US presidential election.

Ms von der Leyen also said she wanted to see a rekindling of the partnership with the UK, amid fraught talks about their post-Brexit relationship.

She fired a broadside against London’s plan to repudiate parts of the withdrawal agreement struck with the EU last year by quoting late UK conservative prime minister Margaret Thatcher, who said in 1975 that breaking treaties would be “bad for Britain, bad for our relations with the rest of the world and bad for any future treaty on trade”.

“It cannot be unilaterally changed, disregarded or dis-applied,” Ms von der Leyen said of the Brexit deal. “This a matter of law, trust and good faith.”

Urging the bloc to find a path forward “towards a new vitality” after the coronavirus pandemic, she detailed plans to channel billions of euros into green and digital projects as it marshals the €750bn recovery fund agreed by leaders in July. This would include projects such as electric vehicle charging points, a boost to hydrogen energy, investments in building insulation and a European data cloud.

Previous PostStep Aside FAAMGs: Goldman Presents The “Future Five” Stocks That Will Define The DecadeNext PostThe Future Of Fracking In The United States