Unlocking: When We Return To Normal

As the COVID-19 pandemic spreads across the globe, an unprecedented lockdown has been imposed in more than 100 countries to minimize the spread of the virus. As the number of new cases globally appears to be peaking, markets are reacting positively, and we are beginning to look through to the eventual lifting of lockdowns.

The severity of the outbreak has varied among regions, countries, and even cities within the same country. We expect that lockdown lifting will also be varied, but follow a general rule of gradual reopening two to three weeks past any locale’s peak in new daily cases.

We expect lockdowns to start lifting in late April to mid-May. For geographies that have yet to see a peak in new daily cases, this timeline will likely be pushed back further to the end of May to June, assuming that new cases peak in early to mid-May.

In the United States, current relaxation of social distancing is being modeled on a state-by-state basis by the University of Washington’s Institute for Health Metrics and Evaluation (IHME). Below we highlight the number of new daily cases, the days since the peak, and the estimated date of state lockdown lifting: 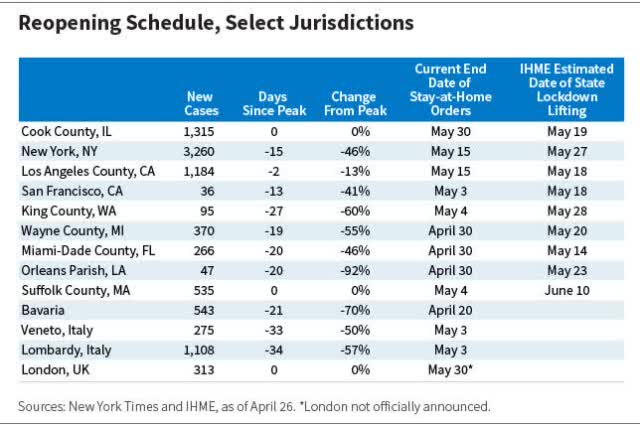 U.S. cities and states are opening closer to their peak dates, while European countries remain more cautious, in line with China’s experience.

To monitor the current status of lockdowns and the subsequent uptick in activity as lockdowns are gradually lifted, we are leveraging Google’s mobility data. Google’s mobility data currently tracks the percentage change in visits to places such as grocery stores, parks, public transportation, and workplaces based on mobile phone data collected from all over the world.

READ ALSO  Virus Fears And The VIX At 30

In the major emerging markets—outside of China, South Korea, and Taiwan—India and South Africa are experiencing a more severe impact on personal mobility, while Indonesia’s mobility has not declined as rapidly.

Emerging markets’ sharp decline in mobility has also lagged developed markets by a week and a half to two weeks, suggesting that any timeline to relax lockdown restrictions will also lag developed markets. 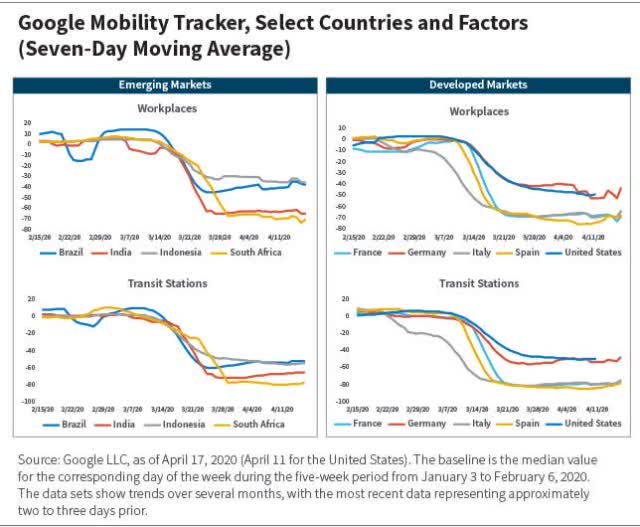 The loss of economic output as a result of COVID-19 may prove to be unlike anything we have experienced since the Great Depression. However, governments in the developed markets have offered unprecedented (in both speed and in scope) monetary and fiscal support to their national economies.

In developed markets, fiscal support will roughly equal the volume of lost economic activity, about 15% to 30% of gross domestic product (GDP). According to the University of Oxford Blavatnik School of Government, cumulative global fiscal spending by major economies in response to COVID-19 is roughly $5 trillion.

Of course, this is an unprecedented situation with an unprecedented fiscal and monetary policy response; if economic output loss proves to be greater than currently expected, central banks and national governments in developed markets will likely deliver more support as needed. 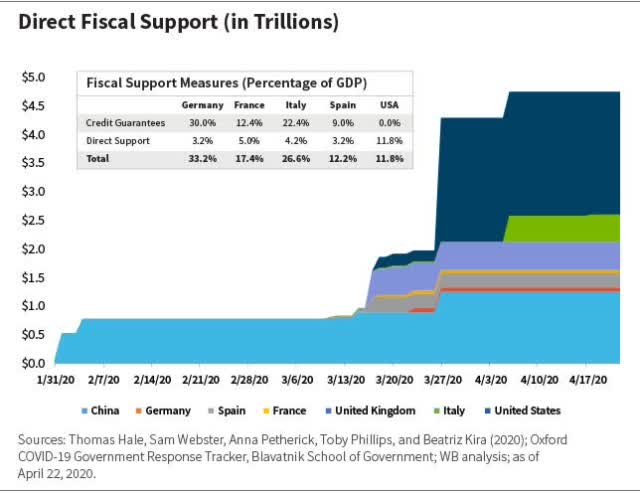