United Airlines pledged 352 aircraft, 99 engines and a host of spare parts to investors to refinance emergency loans taken out when the pandemic struck this year, after a similar deal failed to get off the ground in May.

The $3bn fundraising, led by Goldman Sachs, drew almost twice the investor orders for the seven-year bond than was on offer. The borrowing was finalised on Tuesday with an interest rate of almost 5.9 per cent, according to people familiar with the deal.

The borrowing costs are dramatically lower than what United had almost secured in May, when the US airline struggled to find willing lenders even as it offered to pay 10 per cent a year in interest. Investors had balked at the 19-year average age of the planes United had offered as collateral at the time.

The new bond includes United aircraft as collateral as well as its spare engines and parts, which were seen as more essential to the business than the old planes it had previously pledged. The planes, parts and engines were packaged together in a so-called enhanced equipment trust certificate. The trust takes possession of the assets until United repays the borrowing, offering lenders stronger protections.

Goldman has also provided a liquidity line to cover interest expenses for 18 months if United runs into financial difficulty.

This deal was rejected at 10 per cent and now it’s being accepted around 6 per cent. It’s pretty amazing

Credit rating agencies Moody’s and S&P Global both gave the deal an investment-grade rating — an improvement from the junk label the May borrowing had been awarded.

Roger King, an analyst at CreditSights, said United had thrown the “kitchen sink” at investors to secure the $3bn.

“This deal was rejected at 10 per cent and now it’s being accepted around 6 per cent. It’s pretty amazing,” Mr King said. “It’s an amazing feat of financial engineering.”

The borrowing marks the latest in a string of inventive fundraisings as bankers have sought new ways to secure cash for companies hard hit by the pandemic. United was also the first airline to raise cash backed by its loyalty programme, bringing in $6.8bn.

Investors have largely agreed to lend to Corporate America, piling cash into corporate credit markets in search of higher returns as Treasury yields have sunk.

United has raised a total of $22bn since the start of the crisis through a combination of debt, equity, and grants and low-interest loans from US taxpayers. The company has needed to fill a gap in its budget as passengers have avoided air travel, afraid of the coronavirus and also discouraged by governmental restrictions to limit its spread. United reported a $1.8bn net loss in the third quarter on revenue that fell 78 per cent from a year earlier.

The borrowing from United comes as concerns in credit markets over crisis-affected companies begin to ease. Restaurant and gaming company Dave & Busters borrowed $550m on Tuesday through bond markets in a deal that was met with significant demand, according to people familiar the matter.

The average yield across US investment grade bonds has held around 2 per cent since July, near a historic low. Junk bond yields have also continued to decline. 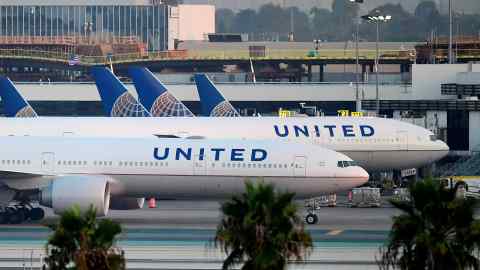 An airline that files Chapter 11 can easily retire old planes, but to keep operating, it needs spare parts to fix its jets, he said. Spare engines, too, allow an airline to keep flying, although they are less critical to operations since an airline can swap in equipment from a grounded plane.

Nonetheless, the higher yield compared to other similarly rated bonds is indicative of the risk investors judged in lending to United.

“This is all on the basis that an airline is continuing to operate in bankruptcy, and they need the parts. If it turns into a liquidation, all bets are off,” said Mr Pastushan.