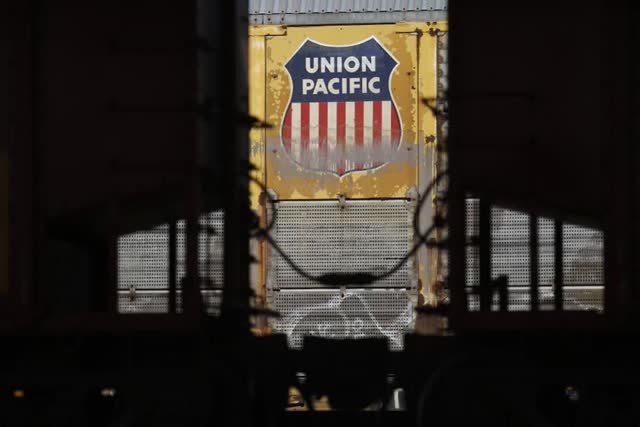 The pandemic has practically caused business activity to grind to a halt. That’s bound to impact shipments of goods via railroads like Union Pacific (UNP). For the first 25 weeks of 2020, total combined U.S. U.S. rail traffic fell more than 13% year-over-year. This implies headwinds ahead for railroads. In its most-recent quarter Union Pacific’s revenue of $5.2 billion was down 3% year-over-year. Total rail traffic fell 7% Y/Y, while average selling price (“ASP”) rose about 5%. Q1 revenue was negatively impacted by disruptions in China’s supply chain. The impact of COVID-19 could cause even more disruptions. 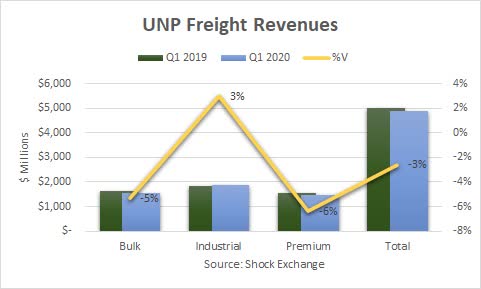 Industrial revenue grew 3% Y/Y as revenue from chemicals plastics and energy and specialized markets grew by double digits. Revenue from metals and minerals fell by double digits, which partially offset growth in other areas. The Premium segment declined, primarily due to a double-digit revenue decline from intermodal. Intermodal is facing competition from trucking, which could persist for the foreseeable future. 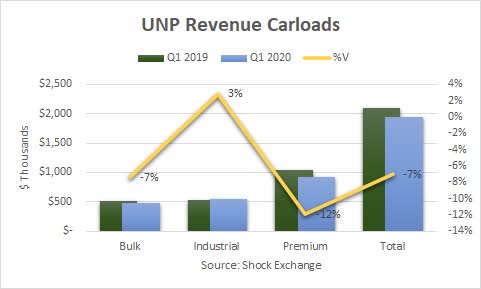 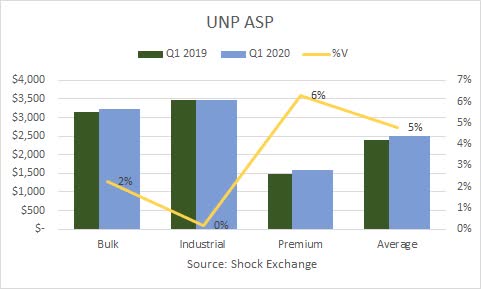 Union Pacific’s ASP rose 5% Y/Y. The Premium segment led the way with a 6% increase in ASP. If the company’s pricing power dissipates then Union Pacific’s total revenue could fall hard even after the pandemic subsides.

Compensation and benefits expense was about $1.1 billion, down 12% Y/Y. The company has been reducing its workforce, and it showed during the quarter. Compensation and benefits were 34% of total operating expenses. Union Pacific gets the biggest bang for its buck by cutting headcount and overtime. Purchased services and fuel costs both fell in the double-digit percentage range. Falling fuel costs is a knock-on effect of a slowing economy, and it has inured to the benefit of railroads.

The fallout was that EBITDA of $2.1 billion rose 9% Y/Y. EBITDA margin was 51%, up 400 basis points versus that of the year-earlier period. Union Pacific may continue to cut costs, but it may not lead to margin improvement if its top line continues to slow. The pandemic is expected to hurt volume going forward:

As you can see, our volume in the second quarter has started off slowing with the volume down 22% so far driven by auto production shutdowns and retail closure as U.S. demand is constrained by the pandemic-related social distancing and quarantine. Many of the auto manufacturing plants are scheduled to be shutdown until at least early May. Already our auto shipments have been down around 80% in the second quarter so far. Likewise, the recent projections in Mexico indicate that some manufacturing sectors like auto will be shut down for similar time periods as well. However, the CARES Act that was recently signed offers some upside to open the economy for business and improve unemployment for America plus it also encouraging to see that much of Asia is restarting production along with China’s recent purchases of U.S. grains.

Volume and revenue will likely fall sharply over the next few quarters. I expect margins to also crater. After the pandemic subsides there’s no guarantee Union Pacific’s rail traffic will return to previous levels.

The Stock Is Overvalued

Financial markets fell immediately after the pandemic began to materialize. The Fed has provided liquidity to the bond market to ensure companies have access to credit and announced a $2.3 trillion relief package for small businesses and local governments. This stimulus helped the Dow Jones (DIA) bounce off its March lows. Certain stocks may trade more on animal spirits and monetary stimulus than on earnings fundamentals. UNP has an enterprise value of $139 billion and trades just under 13x last 12 months (“LTM”) EBITDA.

I doubt consumer spending will return to previous levels, which could hold back the economy for quite some time. Rail traffic and Union Pacific’s top line will likely face headwinds as well. Said another way, I do not believe UNP’s valuation reflects the uncertain outlook for the economy or rail traffic.