LivePerson (LPSN) recently released its 3Q20 earnings results and just like last quarter, they were strong. Revenue growth, EBITDA growth, cash flow generation and the revenue underlying performances were strong. Sadly, investors did not like the results and the stock dipped.

Things were going well, but investors wanted more. They wanted more growth, they wanted better financial performance (adjusted EBITDA was much higher than guided, but the net loss was way below guidance) and they wanted a better guidance. The stock took a hit on 10/29 (earnings released) and 10/30 (conference call).

Were they upset that EBITDA and cash-flow performance are not the new standard? Are they saddened by a 23% year-over-year growth rate? Were gross profit margins not as robust? When I see the performance, I see a strong company and a solid future. I cannot answer those questions and why investors sold this stock down!

This is a nice way to start a Press Release:

Man, the LPSN does not mind tooting its own horn (I guess it is supposed to). What a solid quarter. A beat and raise. Momentum is on its side and LPSN is taking advantage of it. LPSN generated $38MM in cash from operations and increased cash by $22MM. Despite the favorable cash from operations, it should be noted that cash from receivables increased $19MM and $37MM from an increase in accrued expenses and other current liabilities. This leads me to believe it is successfully managing its balance sheet, which is fine, but investors should focus on cash generation from operations to get a temperature on business health.

Outside of the financial performance, LPSN also announced a partnership with Infosys (NYSE:INFY) to further improve and grow its Conversational Cloud product. Rob LoCascio, CEO, stated in the 3Q20 CC:

To further unlock the potential of this market, we are excited to announce a first-of-its kind partnership with Infosys, a leader in next-generation digital services and consulting. We will work with Infosys to transform our technology infrastructure on the public cloud, to build integrated solutions and a global practice around our Conversational Cloud to sell into their channels and global enterprise customer base, and to redefine how the world’s top brands communicate.

As mentioned earlier, revenue increased 26% yoy and exceeded guidance of $93MM. Growth was supported by an increase in website and app traffic as shoppers are visiting sites as opposed to going to brick-and-mortar stores. LPSN’s sales people have done an excellent job signing new logos and improving their cross-selling. The company had a record quarter with 8, seven-figure deals.

Growth was also supported by an increase in retention rate (remained over 100%) and greater than 10% same customer usage growth. These little tidbits are important because it is less expensive to retain customers and to cross-sell. This should help improve operating margins down the line, further strengthening its ability to generate eventually operating profit.

With the strong growth over the last several years and 25% growth rate on the table for FY21, an analyst during the 3Q20 conference call inquired how this will continue in the near term.

The drivers are — we keep opening up more vertical plays. And so like health care right now, you remember last year, it was travel and — travel and hospitality were big for us. Actually, it was still doing well. Our airlines, our hotels, they’re still doing a lot of volume with us, which is kind of interesting. But we see more verticals opening up like health care. I know the government will be a big vertical coming up. And so there’s that place. There’s international expansion. When you look at Southeast Asia and Asia as a whole, South America, like we’re just starting to get these regions going. And then it’s just the proliferation of more and more things like Instagram. These front-end endpoints for the consumer, they’re all opening up, and they need platforms like us to drive the volume. So that’s really where we’re seeing. I felt we’re still at the beginning of the — or — in to here, because even in our base today, there’s so much stuff we can do with our just base of customers, which is also obviously a focus of ours. So that’s what we see.

There’s also on the innovation side, there’s just a lot on the AI, when you think about what it’s going to do, it’s going to free up capacity. It’s going to allow us to augment work for humans we’re doing with agents today. In some cases, we replace conversations. In other cases, we augment their work. And we’re going to do it more and more that were delivered inside the enterprise. I hired John and he’s doing great work. Our enterprise in automating, but we’re looking at tool sets that he’s building to put into the Conversational Cloud. So things — conversations you’re having with HR departments internally, legal departments, your finance department, all that we see is something that will come into the Conversational Cloud. So like I said, kind of in the second inning, first inning was messaging, second inning AI, and now we’re expanding here across these different things I talked about.

To sum it up, there are still innings left in the game. There are opportunities to grow vertically and to expand into new regions and that will take time.

Gross profit margin increased to 70.8% in 3Q20, or ~100bps higher than the previous quarter and in line with guidance. Adjusted EBITDA was $9.3MM in 2Q20 and the third-quarter guidance was $5MM-6MM. Well, LPSN generated $15MM of adjusted EBITDA in the most recent quarter! John Collins lays out the reasoning:

Q3 adjusted EBITDA of $15 million marked an all-time high for LivePerson and exceeded the midpoint of our guidance range by $10 million or 74%. Our adjusted EBITDA margin increased 24 percentage points year-over-year to a multiyear high of 16%. The profit upside can be attributed to the following drivers, each and about equal contribution: Higher-than-anticipated revenue, the continued deferral of hiring in noncore growth areas as internal automation takes of repetitive jobs and enhances employee productivity; the deferral infrastructure spend as we solidified our plans around the public cloud migration with Infosys; and the onetime impact from the write-off of leases; and the accelerated depreciation of fixed assets after officially transitioning to an asynchronous work-from-anywhere model.

Strong revenue and underlining metrics, coupled with conscientious spending have led to positive free cash flow year to date and LPSN is ahead of its goal of cutting the cash burn in half. As noted earlier, cash flow was partially supported by managing the balance sheet. I would like to see business operations be a larger factor in delivering cash flow. Given the improvement we have seen this year and the continued strength in the retention rate and ARPU, LPSN is heading in the correct direction.

Furthermore, investors are curious if this level of cash flow generation will continue and Ryan MacDonald, Analyst with Needham & Company, posed that question during the conference call.

Excellent. And then just as a follow-up, John, I’m really impressed with the free cash flow generation in the quarter. Obviously, a lot of the work has been done and pieces have been put in place to automate a lot of the back-office functionality. Given sort of the early gains you’ve seen there, how sustainable do you think that positive free cash flow is moving forward here?

Yes. I would just say that while hitting the rule of $40 million on a free cash flow basis this quarter is an amazing achievement, and again, a testament to our ability to control the P&L in strategic ways and really rapid ways, I don’t see it right now as a new run rate for us. However, as I’ve consistently said, my #1 mandate is to move the company towards sustainable cash generation and profitability, while simultaneously maintaining our ambitious growth goals for the top line, and I don’t see that changing.

Right now, it seems like this quarter’s performance is a one-off. As mentioned earlier, the road is being paved for continued cash flow generation and to reduce cash burn.

Solid momentum, strong signings and increase in volume lead to an earnings beat and raise! This is such a good road map to follow. Midpoint FY20 revenue guidance increased 1% from the guidance provided in the previous quarter. Guided FY20 adjusted EBITDA midpoint of $30MM represents a 71% increase from the $17.5MM midpoint guidance from last quarter. 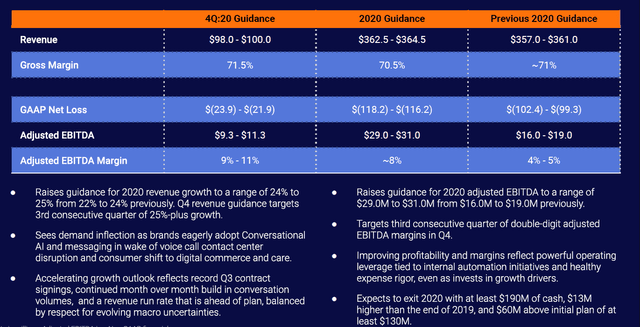 With regards to the bottom line, the Company continues to operate at a new level of efficiency and productivity. A combination of healthy budgetary vigilance and steady adoption of internal automations have enabled LivePerson to drive year-over-year profit improvements and margin expansion even while investing in key growth drivers of AI, product innovation, go-to-market capacity and tech infrastructure. With this in mind, the Company is raising guidance for 2020 adjusted EBITDA to a range of $29.0 million to $31.0 million, up from prior guidance of $16.0 million to $19.0 million.

This is what I like to see; strong revenue growth and fiscal discipline. LPSN is turning the corner and becoming a more mature company. It is entering a new phase of generating capital to invest internally through solid revenue growth and operational leverage. Credit has to be given to John Collins. He has really taken control of expenses in a short period of time.

LPSN had a solid quarter all around. Revenue was higher, EBITDA was higher, cash flow was higher. It was not a perfect quarter, and it appears that is what investors focused on. Cash flow and EBITDA performance were not run-rates or a new standard, guided FY20 revenue growth did not materially increase from previous guidance. Come on now. So much is going well. John Collins keeps reiterating the plan to improve operating leverage and reduce cash burn. He even stated that 25% revenue growth rate for FY21 is feasible and he even laid out a road map! What more does one want? I like the company and the opportunity. There is room for the stock price to increase and the recent selling after earnings may be an entry point.