European regulators have refused to soften rules on swaps trading by EU banks in the UK, threatening London’s post-Brexit hold on a derivatives market worth €50tn a year.

The Paris-based European Securities and Markets Authority on Wednesday said EU banks operating in London would continue to be subject to Brussels regulations when the Brexit transition period ends next month.

UK regulators had hoped Esma would allow those banks to continue operating under British rules from January, avoiding a clash. The prospect of a doubling-up of regulations means EU banks operating in Britain could be forced to route some trades to New York, which has equivalent derivatives standards recognised by Brussels.

The failure to resolve the stand-off will come as a blow to some European banks with London operations, which had hoped to maintain access to the city’s vast derivatives market after the end of the Brexit transition period.

Esma blamed UK regulators, saying the dispute was “primarily a consequence of the way the UK has chosen to implement” a requirement, known as the derivatives trading obligation (DTO), which sets out where brokers and investment banks can trade.

“We had hedged ourselves by moving derivatives operations to a certain extent, but I am a bit caught by surprise by their actions,” said the chairman of a large European bank affected by the brinkmanship. “It’s a small part of the market, but the actions of the two sides are not encouraging.” 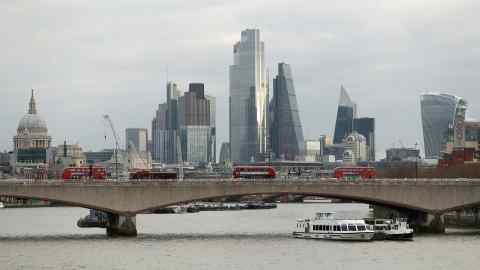 Trading under the DTO accounts for about €50tn of the €681tn European derivatives market, most of which is based in London.

In France, both the financial-markets regulator and the country’s banking federation said they did not support Esma’s approach, and warned of creating contradictory obligations for UK branches of EU banks.

The EU-UK stand-off increases tensions over how far the two sides are prepared to go to maintain access to each other’s markets from January. Both sides have sought to assert regulatory oversight over markets activity centred in London’s vast capital markets.

Michael McKee, financial services regulatory partner at law firm DLA Piper, said Esma’s decision was “a starting gun for a fight between the UK and the EU for the location of international derivatives trading in Europe”.

Esma said it was not compelled to adjust how EU rules were applied because the DTO did not threaten the bloc’s financial stability. However, the body acknowledged that its approach “creates challenges for some EU counterparties particularly UK branches of EU investment firms”.

The EU agency noted that the European Commission had the power to resolve the matter by taking a decision that UK trading venues are properly regulated and supervised — a step known as an equivalence decision that would open up market-access opportunities.

The Treasury has the power to reciprocate for the UK.

Esma’s focus on equivalence decisions was echoed by the UK Financial Conduct Authority, which said on Wednesday that “we will also not be adjusting our approach at this time” and that “mutual equivalence would be the best way to avoid market disruption”.

Derivatives trading is one of the biggest businesses in the City of London, which has the lion’s share of European trading. About €50tn in annual notional value falls under the DTO rule, including instruments such as interest rate swaps, which allow investors to hedge against, or speculate on, rates movements.

The rule requires that the most actively traded contracts are traded on an EU trading venue, or one Brussels considers to be of an equivalent standard.

London-based branches of EU banks are caught in the crossfire because they risk falling foul of contradictory instructions from two sets of regulators in January.

Brussels has so far refused to provide any reassurance to the UK about what market-access rights it might be prepared to offer.

EU officials have privately acknowledged that the possibility of equivalence decisions is politically bound up with the two sides’ trade talks, which are continuing this week.