Uber: Virus Could Push Cash Bleed Over The Edge (NYSE:UBER)

Since the outbreak of COVID-19 began, Uber (NYSE:UBER) has seen enormous swings in its value as investors aim to forecast the true effect of the virus on its operations. I believe that exclusive of COVID-19, Uber should be trading around $15-$20 given the continued growth of operating losses, excessive cash burn, increasing high-interest debt, and growing competition in both its Rides and Eats markets. The global virus pandemic will push Uber to greater operational losses this year as Rides demand plummets and loss-making Eats deliveries grow. This greater-than-expected operational loss will increase cash burn, with expected cash usage in 2020 between $7 billion and $9 billion causing liquidity issues as early as 2021. 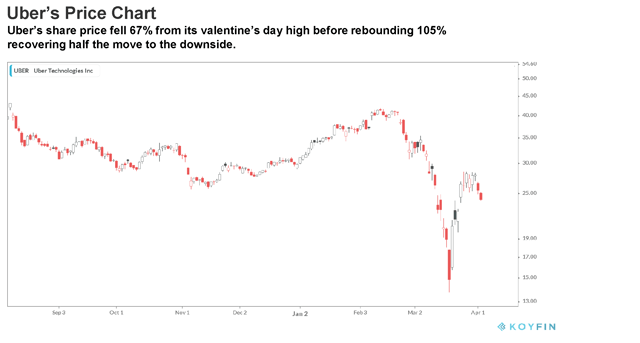 Uber’s core business idea is incredibly simple; everyone knows how a taxi works. They’ve been around since the 15th century. Uber generates significant revenue from Rides and growing revenue from Eats; however, the current level of revenue generated from these trips is not enough to cover other costs. The key to Uber’s future success is cost reduction, which for the last 10 years it has been struggling with.

Uber’s income statements over the past two years have from a brief look swung wildly from a net profit of $987 million in 2018 to a loss of $8.5 billion in 2019. Uber’s business divestitures in 2018 boosted net profit while excess share-based compensation due to its IPO in 2019 enhanced losses. Normalizing the income statement for these one-off costs and gains reveals Uber’s true income from its day-to-day operations.

Uber has $2.1bn in unamortized stock-based compensation to be recognized over the coming 2.5 years with this expected to rise as new compensation is issued.

Reducing cost for Uber is tough. Drivers’ earnings are the primary cost; however, changes in laws globally with the enforcement of minimum wage and taxes have made reducing this cost for Uber difficult. The company can reduce R&D spending by reducing or dropping automation development. This, in my opinion, is a gross misallocation of resources for Uber given large names such as Tesla (NASDAQ:TSLA) or Google (NASDAQ:GOOG) (NASDAQ:GOOGL) investing significantly more and likely to obtain results in a fraction of the time. Full automation is likely years out, and future cost savings to Uber will be of little consequence if the company goes under from current losses.

Uber could boost earnings through price increases in delivery/ride fees or increase revenue from restaurants; however, in an incredibly competitive market, customers prioritize low cost and convenience, and restaurants prioritize the lowest margin and delivery time. As such, if competitors don’t also increase prices, Uber will quickly lose market share.

READ ALSO  What Biden/Harris Will Do

COVID-19 is having a significant negative effect on Uber’s core business of rideshare and boosting loss-making deliveries for Eats. US virus cases have increased significantly with cases expected to peak over the next three weeks. Fatalities in the US alone are expected to be around 200,000. We can all but expect a full lockdown for the US much like in New York (one of Uber’s main five markets) and Europe.

Uber stated in its 19th March conference call that Seattle Rides trips were down 60%-70% Year on Year (YoY). Since then, virus cases in the US have increased significantly in Seattle and King County. On the 19th March, there were 874 confirmed cases, while now being over 2,330. In Hong Kong, Uber noted a peak reduction in rides of 45%, which had improved back to down 30% over two months. We are unlikely to see a “V” shaped recovery in Uber Rides as demand from tourism is likely to be significantly reduced until next year and businesses are limiting employee travel until at least Q3.

Eats has seen a boost in popularity as individuals are unable to leave the house and most are working from home. However, in Europe, the majority of Uber Eats’ large chain restaurants have closed including McDonald’s (NYSE:MCD) in the UK due to safety concerns and local restaurants have shut their doors due to a lack of demand for delivery. With most restaurants in Europe relying on eat-in customers to keep the lights on, it has become uneconomic to keep operating. Uber, Deliveroo, and JustEat have all launched huge Europe-wide campaigns to boost deliveries hinting at slowing demand. Europe represents around 15% of Uber’s total revenue so a significant hit on-demand in both Rides and Eats could seriously dent top-line performance.

Although consumer behavior is more attuned to restaurants providing takeout and delivery in the US, we are still likely to see a drop in demand for Eats as economic conditions worsen and consumers become wary of excess expenditure. Uber Eats is currently offering $0 delivery fees on food from restaurants classed as “local,” i.e. independent restaurants. This will worsen costs for Eats and will put greater strain on poor profitability.

In Uber’s Q4 2019 conference call, CEO Dara Khosrowshahi stated the company was in a “strong cash position”. While this statement is true, the company had $10.9 billion in cash as of 31st December 2019. A strong cash position would imply enough cash to last several years, not two at best, and one if the COVID-19 outbreak worsens.

The company’s IPO bolstered its balance sheet providing significant amounts of cash and eliminating nearly $3 billion in convertible notes from its liabilities. Uber’s IPO netted the company $9.5 billion in cash bringing the cash total to $10.8 billion.

In the Q4 2019 conference call, Dara Khosrowshahi gave some estimates for Uber’s cash position for year-end 2020 after the COVID-19 outbreak has been controlled. The first scenario given was an 80% drop in trips with no recovery for the rest of the year where Uber would have $4bn in cash and a more likely scenario where there is recovery after Q2 where Uber would have $6bn at the end of 2020. Mr. Khosrowshahi also stated that as of the end of February 2020, Uber had $10bn in cash, indicating the firm had used around $1.3bn since the end of 2019, an annualized rate of $7.8bn.

Uber closed a deal with the Middle East brand Careem in January agreeing to pay $3.1bn, $1.4bn of which was in cash and $1.7bn was in convertible notes maturing 90 days from issuance with a $55 exercise price. Uber is expected to have an operating net loss of at least that of last year ($4.3bn), although it could be substantially higher given economic conditions. Uber also spent $559m on interest in 2019 which, given lower rates but increased issuance, we could expect to remain constant. Realistically in the best-case scenario, we can expect Uber’s cash burn to be $8bn, and with the true effect of the virus not known, we can expect this number to be significantly higher.

Given an $8bn cash burn in 2020, Uber would end the year with around $3bn in cash assuming no more debt issuance. At the current rate of operational loss, this wouldn’t support operations for the whole of 2021.

Debt is Uber’s Only Option, And It’s Not A Good One

Uber doesn’t have any significant principal repayments until 2023 (a 2016 senior secured term loan and 2023 senior note totaling $1.59bn), although given the current effect of COVID-19 on cash flows and burn rate on cash holdings, it’s looking likely Uber will have to reissue to settle these current notes.

This reissuance would usually cause little issue; however, with Uber looking to need more debt to fund operations between now and 2023, if profitability isn’t improved, the ability of the company to secure this debt seems unstable. This provides a significant liquidity risk and at best would significantly weaken the balance sheet with higher-yielding debt if cash flows are not bolstered in the coming three years.

With the Fed’s target rate being brought significantly lower, many companies are looking to take advantage of cheaper money. However, Uber’s biggest downside to holding significant levels of debt is the high interest paid on notes issued due to poor credit ratings.

Currently, Uber’s credit is rated as junk at both Moody’s and S&P. S&P gave a B- rating on Uber’s most recent debt offering in July 2019, also including a recovery rating of 2 (70%-90% recovery in event of default), citing an expected EBITDA breakeven of 2023, although COVID-19 was not factored into this. S&P rated Uber’s unsecured debt one rank lower at CCC+, but gave a much lower recovery ratio of 5 (10%-30% recovery in event of default) given limited potential future cash and increased future debt. Moody’s gave the same 2027 senior note a B3 rating while rating Uber one step higher at B2.

Uber currently has a debt-equity ratio of 51.6%, up from 40.0% after the IPO in Q2. Due to the cash injection and debt reduction from the IPO, Uber’s debt-equity ratio fell from 150% in Q1, which was up from 95.5% in Q1 2018. I see Uber’s long-term solvency ratios to continue to degrade as the firm’s accumulated deficit rises and either more cash or debt is used to fund operations. Uber currently has an Altman Z score of 1.5 putting the firm in the danger of bankruptcy range of any reading below 1.8. This is up from -0.2 in Q1 2018.

Uber has seen significant push back from taxi firms and local governments around the globe. From a potential ban in London to issues in Germany, France, Italy, Finland, and The Netherlands, Uber has had its fair share of encounters with local and national governments; however, in more recent years, Uber’s battle with regulators has eased, as ridesharing becomes more mainstream and widely accepted. I see the risks declining for Uber especially in the U.S., its main market.

Uber has also been at the center of an employee pay lawsuit in which it has avoided paying billions in employment taxes and not paying the minimum wage by classing drivers as contractors and not employees. Several states including New Jersey, New York and California have ruled against Uber. It’s not just in the U.S., U.K. courts followed suit also ruling that drivers were employees. Uber stated that this change could raise costs for the firm by 20%, potentially costing it billions per year.

The next six months will be key for Uber, and the true effect of the COVID-19 outbreak on Rides demand will be deeply negative. Eats remains a different story. If Uber can maintain demand for the service after many high-demand restaurants close and reduce driver costs as the supply of drivers for Eats increases, then Eats could provide a positive boost to the bottom line. However, I still believe that increases in Eats demand will have a net negative effect on income in 2020.

The big question for Uber’s management is can it stay solvent long enough to begin profitable operations? Uber is sticking with its end of 2020 profitability target which given current economic conditions seems farfetched. I’m not saying Uber is not an amazing idea and it has huge potential, but tech in 2000 comes to mind. It might be a fantastic idea, but is there a way of executing it profitable? Currently for Uber, it would seem not.

I would not suggest opening a short position on Uber currently given increased market volatility, but it would be ill-advised to open or hold a long position before Uber releases Q1 financials and the true impact of the virus on operations and cash burn is seen. I believe that excluding the virus, Uber would be at home trading around $20; however, due to the risk the virus poses to Uber’s long-term liquidity, a discount should be applied at least until the full financial picture becomes clear.