Just as business was showing signs of picking up for California’s ride-share drivers, by Friday it could disappear completely — barring a last-gasp attempt from Uber and Lyft to avoid a court-imposed deadline to reclassify their workers as employees instead of contractors.

A Superior Court judge has given the companies until the end of Thursday to make the switch, paving the way for drivers to get healthcare, sick pay and other benefits in accordance with the state’s AB5 law. Uber and Lyft say such a move would be impossible, insisting their business models cannot be changed at the “flick of a switch” and arguing they would have no alternative but to shut down by Friday.

In an effort to buy some time, both Uber and Lyft are now asking an appeals court to issue an emergency stay that would delay the deadline while their appeal is heard. A decision on that should come in the next few days.

For now, however, the two face one of their biggest existential crises yet, with their operations hanging in the balance, their drivers on the verge of months without work, and the risk that the political tide may be turning when it comes to the “gig economy” business model. What unfolds in California — Uber and Lyft’s home state — could also have far-reaching effects on gig economy legislation elsewhere.

“The consequences to drivers and the public from the impending shutdown will be catastrophic,” warned Uber in its filing, saying “hundreds of thousands” of workers in California were at risk. “Uber cannot hire and onboard the hundreds of thousands of drivers who have signed up to use the app . . . it will take at least several months to make the necessary changes.”

The high stakes will be a factor likely to weigh on the court’s decision, suggested Beth Ross, an attorney and leading specialist in employment law.

READ ALSO  The next pandemic: where is it coming from and how do we stop it?

“The harm that would flow from the shutting-down of operations would not inure to the companies, but would be visited on workers,” she told the FT. “And that is something that judicial officers, as human beings, are going to stop and think about.”

‘Not the right model’

Converting drivers to employees is not a straightforward process. New systems would be required for recruiting and training — costs the companies said they would pass on to riders, raising prices by between 20 and 120 per cent.

The injunction covers Uber’s and Lyft’s ride-share drivers only, meaning Uber’s food business, Eats, can continue operating. Uber said it had been directing drivers towards that side of the business, which since the pandemic has been a larger source of revenue anyway. Lyft does not have a food delivery business.

For both companies, California — though one of the slowest areas of the country to show signs of recovery from Covid-19 — is still a hugely important market. In a recent earnings call, Lyft said the state represented 16 per cent of its total revenue.

“The big question is, how long do they pull out for?” said Ygal Arounian, research analyst with Wedbush. “Uber and Lyft both have the same end goal, they want that middle-ground approach. They don’t want to classify all their drivers as employees because I think they really, truly believe that’s not the right model.”

Uber and Lyft have a record of leaving markets due to political and legal pressures, and previous battles have ultimately led to the companies getting their way. 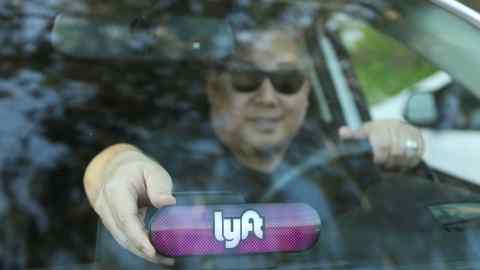 In May 2016, for instance, the companies pulled out of Austin, Texas, in opposition to a requirement to obtain fingerprint data on drivers — returning to the city a year later after successfully backing a state-level law that overruled the one that they had objected to in Austin.

But concerns over the rights of workers look unlikely to go away so easily, with political momentum behind efforts to force gig economy companies to offer greater support to workers.

In Seattle last week, the city’s mayor announced a plan to enforce a minimum hourly wage for drivers, which was called “unworkable” by Lyft. In the UK, Uber last month made a last-ditch appeal to the Supreme Court to argue its 60,000 drivers in the country are contractors, not employees.

Against the California state attorney, backed by city attorneys from San Francisco, San Diego and Los Angeles, Uber and Lyft appear to be heavily on the back foot. In scathing written remarks shared last week, Judge Ethan Schulman wrote that there was an “overwhelming likelihood” that prosecutors would prevail, dismissing core arguments in Uber and Lyft’s defence as “nonsense” that “flies in the face of economic reality and common sense”.

Yet while suspending their services in the state might be seen as a disaster for Uber and Lyft, the move could in fact provide them with an opportunity to win a bigger prize: stronger public support for a new gig economy law in California, to be voted on this November.

Proposition 22 would carve out an exception from AB5 for app-based workers, overruling whatever might happen in this current case, which may not be concluded before the vote. It would entitle drivers classified as contractors to some benefits — such as a “minimum earnings guarantee” that is higher than minimum wage — though not all of those currently being demanded by the state.

“This could give the ride-share companies more tangible data and examples to use in their lobbying efforts to drive voters to the polls and in their direction toward Prop 22 on November 3,” read an investor note from Morgan Stanley. “In our mind, a successful Prop 22 vote is critical to the future of ride-share industry profitability.”

Consumers would “remember what life was like before Uber and Lyft”, concurred Mr Arounian from Wedbush. “I think that gives them a little bit more power. I think that becomes an easier marketing campaign.”

Several gig economy companies — not just Uber and Lyft — have poured more than $110m into backing Prop 22. Among them is DoorDash, the market-leading food app delivery company, itself facing the prospect of a preliminary injunction, in a separate case led by San Francisco district attorney Chesa Boudin.

The public relations strategy to sell Prop 22 is well under way. Over the past few days, Lyft has emailed its California-based customers urging them to “please consider standing with us and drivers” in backing the measure, citing research it says shows drivers would prefer to remain independent contractors — a sentiment AB5 supporters dispute, arguing that Uber and Lyft have mischaracterised the realities of what it would mean to be an employee.

Meanwhile, Uber chief executive Dara Khosrowshahi — who last week wrote an op-ed in the New York Times touting the new law — has been lobbying drivers. He appeared on The Rideshare Guy, a popular podcast aimed at gig workers. The episode was promoted to drivers directly through the Uber app.

Those drivers, already suffering from depleted earnings due to the pandemic, worry they are getting caught between political ambition and corporate interests.

“They must sort it out,” said one driver, a Jordanian immigrant driving in San Francisco over the weekend, who asked not to be named. “It’s just so many jobs. So many jobs.”

Previous Post“Until You Kill Me, There’ll Be No Other Election!”: Belarus’ Lukashenko Defiant As Strikes, Protests SpreadNext PostOil Refiners Are Being Forced To Adapt Or Die