We are trying to predict two things here, firstly the likely future progress of the economy. The second is how – if at all – monetary and fiscal policy is likely to change in reaction to that first. If the Fed’s going to raise interest rates – no, not likely now, this is just an example – then we’d like to have a heads up on that just so we can be positioned right for that event. Similarly, if the economy is about to head down into a second wave of recession we’d like to know about that too – also so as to be positioned for it.

This is not purely a function of economic indicators of course. A substantial second wave of coronavirus infections would be a medical event but it could lead to an economic one of another lockdown.

So no one piece of information, or even field of study, is going to tell us everything here. But we have to do the best we can of course.

Almost all of our economic indicators are backward looking – they’re records of something that happened. From which we can, often enough, gain some knowledge of what is likely to happen. After all, the best usual economic forecast is that tomorrow is going to be about the same as today, next month pretty similar to last. That’s not exactly what we want to know though, what we’re really looking for is those break points where things aren’t about to be the same.

So, we’d like forwad looking indicators if we can find them. The purchasing, and sales, managers indices (PMI and SMI) are just such. Everything has to be made from something so, if we go out and ask the people who buy the stuff things are made from then we get a pretty good idea of what is about to be made. So too with sales managers, if we ask the people who have a pretty good handle on what is about to be ordered we’ll gain some insight into that near future.

Do note that they are both records of the past – the very near past – but they are asking informed market participants to look into the near future. So, they’re forward looking then. As it happens the SMIs are largely constructed by people who, in their previous jobs, worked on the PMIs. They’re both aiming at that same goal, allowing us that little peer* into the future.

They are records of professional opinion rather than hard fact so we must weigh them as such, but they are also future looking which is their rarity.

We have the Flash PMI for the US:

Sure, things aren’t growing as fast as they were but then coming out of a deep, deep, recession we didn’t think they would be. Above 50 is expansion and up close to 55 is substantial expansion. Given that manufacturing is only 10% of the economy it’s the service number which is really important as a measure of the whole economy and which drives that combined result. 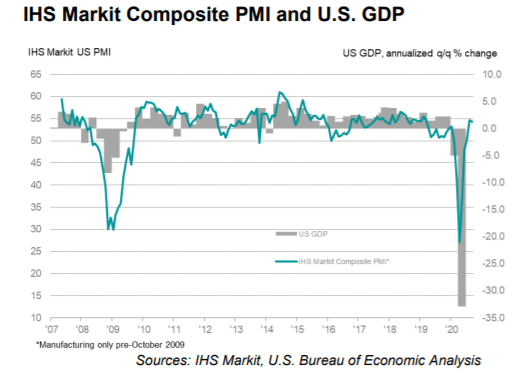 (US Flash PMI from IHS Markit)

The SMI is the lesser known cousin from World Economics:

Business Confidence in the state of the US economy has crossed the 50 level and moved into positive territory for the first time since the Covid drama began, resulting in a 7 month high for the Index. However the improvement is still marginal.

The SMI has been running much cooler than the PMI in recent months. Just one of those things. Directions have been the same, sizes different. 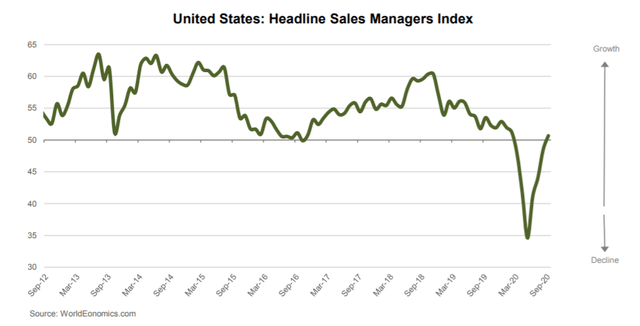 (US SMI from World Economics)Our conclusion

Noting that this is opinions, even if from professionals, and that this is a forward looking indicator, we should be concluding that the economy has continued to expand in September.

The proof of that pudding is going to be in the quarterly GDP figures but we don’t get those for quite a bit yet. It’s the UK that is an oddity in producing monthly GDP numbers.

It’s still entirely possible that everything gets knocked off course by enough of a second wave to produce another lockdown. I think that’s unlikely but it’s always possible. Taking that risk off the table we are left to conclude that the V shaped recovery still persists. For we are still getting substantial growth even as we asymptotically approach where we were when this all started.

As regular readers will know I’ve long been pushing the idea of that V shaped recovery. It’s already entirely clear that we haven’t become stuck at the bottom of the depression. The question becomes how close to where we were do we become. My reading of this V shape is that we’ll get back to, as a matter of simple rebound, perhaps 95% of where we were. It’s that last 5% or so that’s going to be more difficult. For this will be the area of the economy that wasn’t just hit by lockdown, or falling demand and all that. But that part hit by the changes in behaviour, social distancing and all that, which will persist.

I expect that to get dealt with relatively quickly too but it’ll take longer than this initial bounce back.

For us as investors this all matters because the market indices are already priced for about this outcome. Any proof that we’re not going to have a V (say, W, or L etc) will mean a fall, possibly substantial, in the general level of prices on the stock market.

Macroeconomics won’t take us much further than this. We can, for the moment, rest easy concerning the general price level. To find the outperformers we have to delve into specific companies and situations.

*An English joke, no not John Bercow, who isn’t going to be a peer either by all accounts.