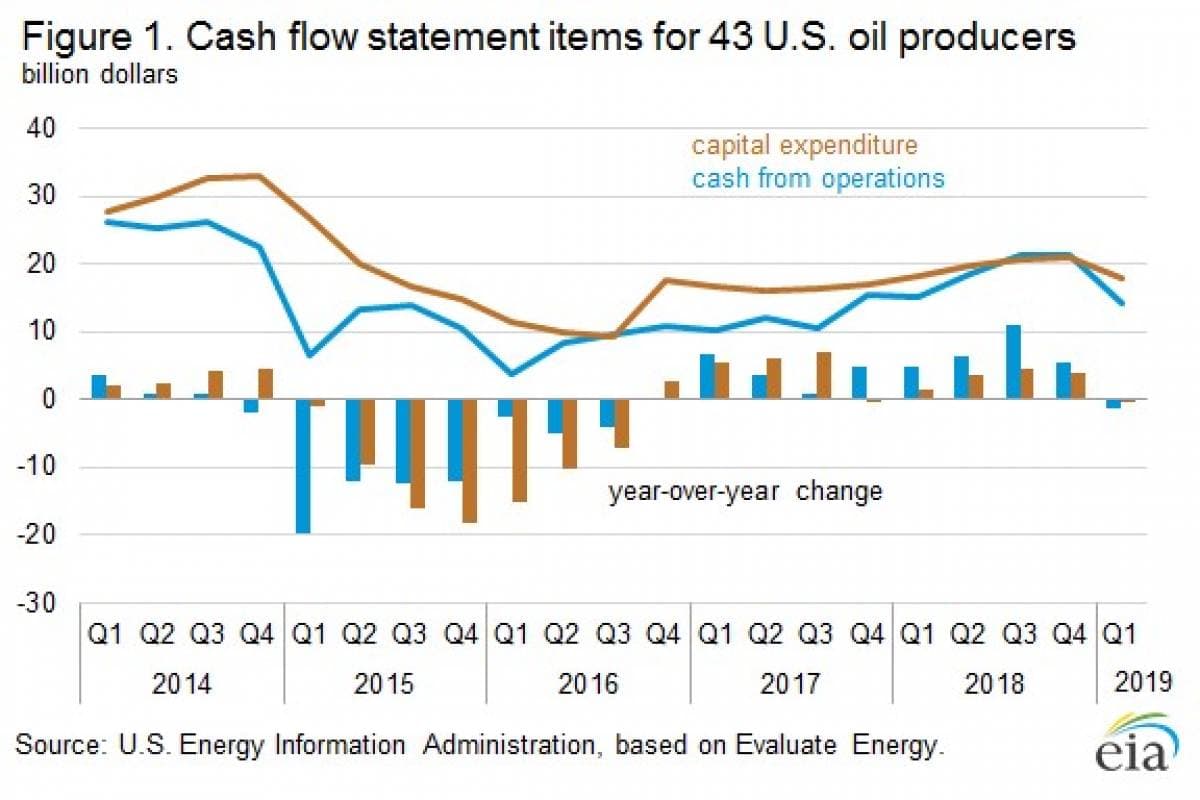 – In the first quarter, an EIA survey of 43 U.S. oil producers finds a deterioration in cash flow of a combined $1.2 billion compared to the first quarter in 2018. Much of that can be pinned on the $8-per-barrel decline in prices over that time period.

– Notably, aside from mostly breaking even in the middle of 2018, the 43 companies have been cash flow negative for years.

– But year-on-year cash flow had been steadily improving since 2016…until the first quarter of this year.

– Liquids production from the 43 companies jumped by 0.7 mb/d in the first quarter and capex declined by $0.3 billion.

– The shale industry, under pressure from shareholders over the last year or two, has begun to prioritize shareholder payouts. The 43 companies spent $4 billion on shareholder distributions in the first quarter, or 31 percent of cash flow from operations. In 2018, the companies had only spent an average of 28 percent. 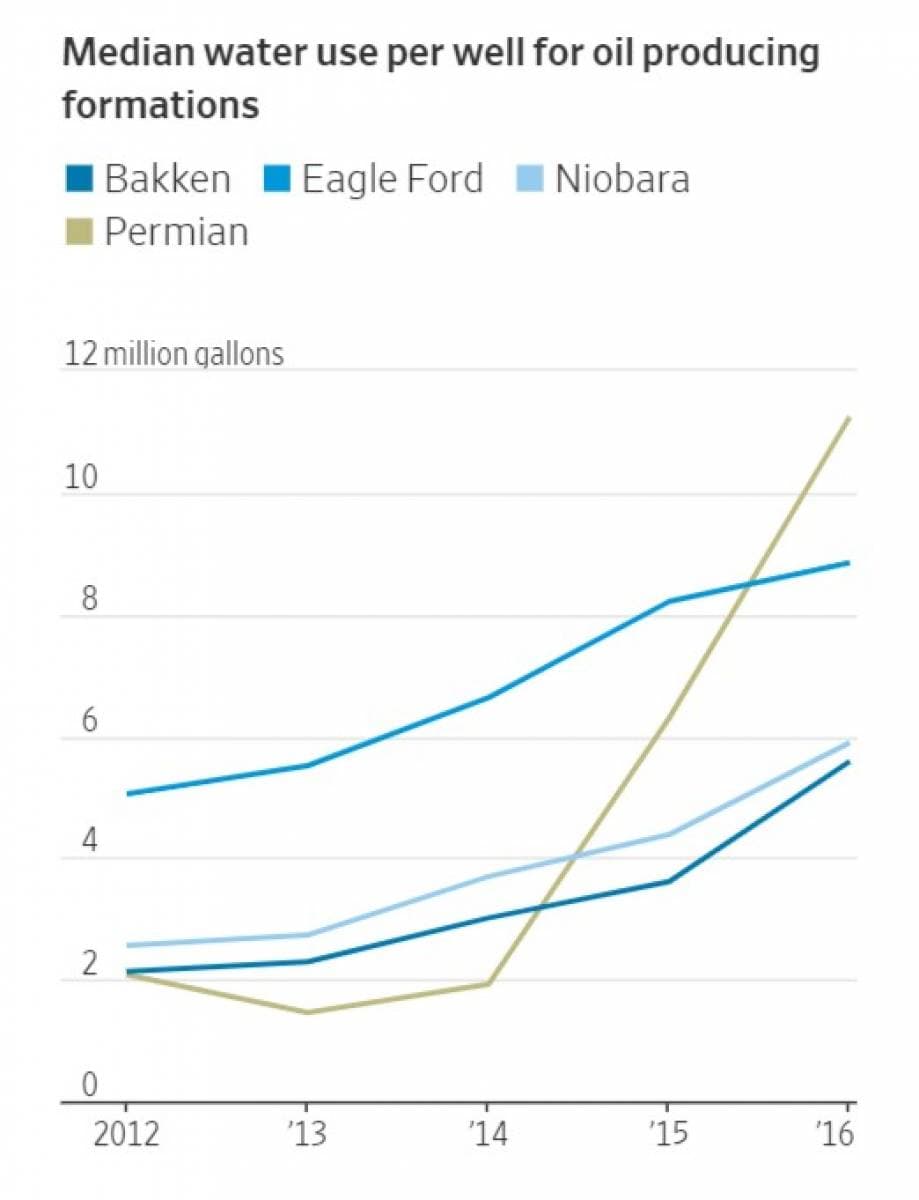 – Drilling in the Permian basin is putting stress on the region’s scarce water reserves.

– The median water use per well used in oil drilling in the Permian surged from 2 million gallons to over 11 million gallons between 2012 and 2016, according to the Wall Street Journal.

– Drillers spend between 50 to 75 cents per barrel of water, according to Bluefield Research, which translates to about $200,000 per well.

– The shale industry spent over $13 billion on water in 2018, with 54 percent of that concentrated in the Permian. That total is expected to surge to $54 billion over the next decade. 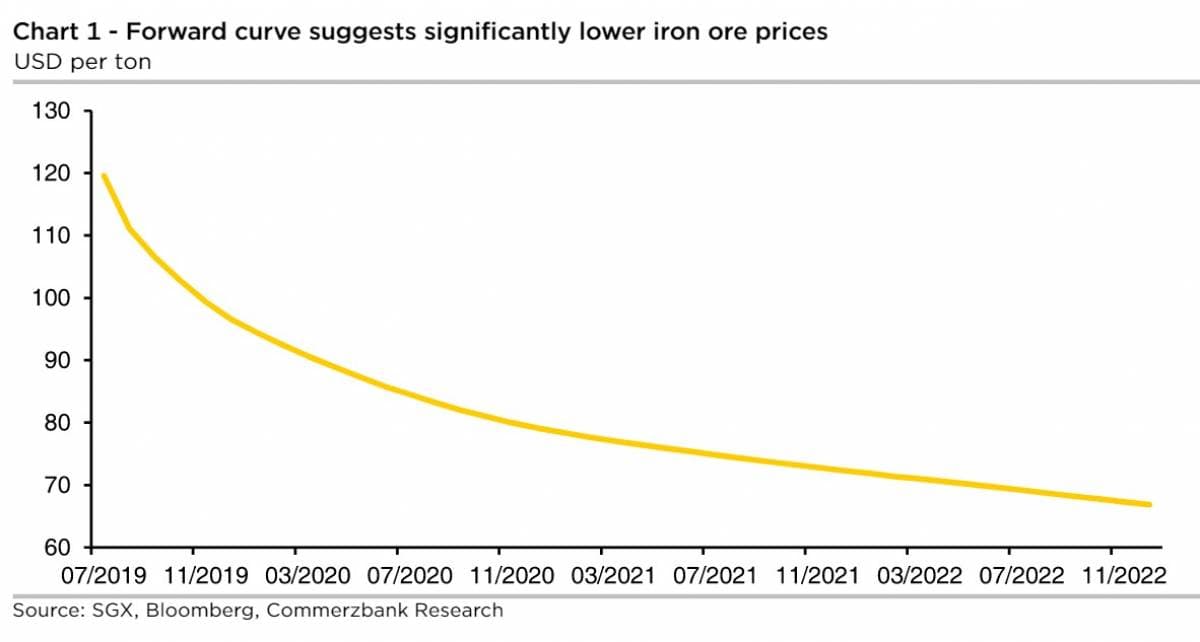 – Iron ore prices had been on the rise this year, but they have “switched to correction mode,” according to Commerzbank.

READ ALSO  Dalio: The United States Is At A Tipping Point That Could Lead To Revolution Or Civil War

– Prices had hit a multi-year high of $120 per ton earlier this month, close to a record high, but prices have fallen by about $10 since then.

– Part of the reason is that Brazil’s iron ore giant, Vale, is hoping to restart production at some of its mines, which were shut down following disasters earlier this year.

– S&P Global Platts sees a supply deficit for seaborne trade this year of about 54 million metric tons this year, and it could take three years for the deficit to clear.

– Commerzbank is more bearish, pointing to weak demand for steel in China. “In our opinion, there is no fundamental justification for the still high iron ore prices. We expect a further significant correction,” Commerzbank said in a note. “The sharply falling forward curve suggests a price of below $100 at the end of 2019 and even of below $80 by the end of 2020.” 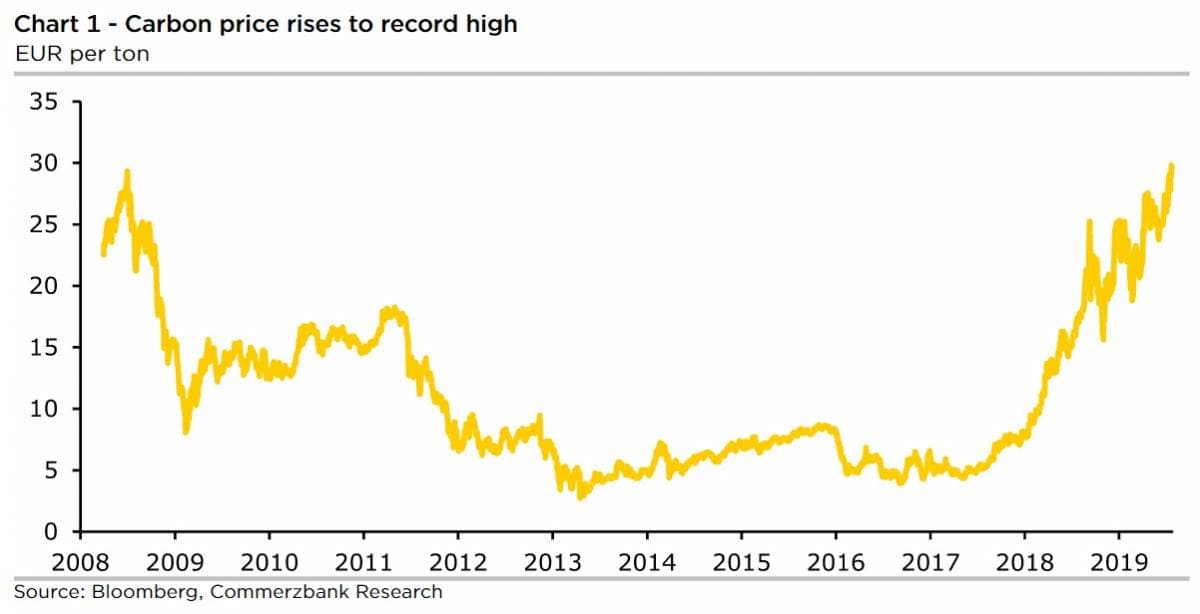 – Coal is getting slammed in Europe on two fronts – cheap natural gas and record high prices for carbon.

– Carbon prices are trading near 30 euros, surpassing the previous record set in 2008. Record high temperatures are also adding a bit of seasonal jolt to electricity markets.

– “The latest heatwave in Europe is boosting the upswing because it increases electricity consumption, yet nuclear power production in France is having to be reduced in some places because temperatures in the rivers are too high,” Commerzbank said.

– However, natural gas prices have plunged worldwide amid a glut.

– The end result is a rapid deterioration of coal’s position in Europe. Coal use fell by 40 percent across Italy, France, Germany, Spain, Portugal and the UK in the first six months of this year.

– “The exit from coal is finally driven by the market,” Claudia Kemfert, a professor of energy economics at the DIW research institute in Berlin, told Bloomberg. “The repair of emissions trading has worked.”

5. Small shale companies out of favor 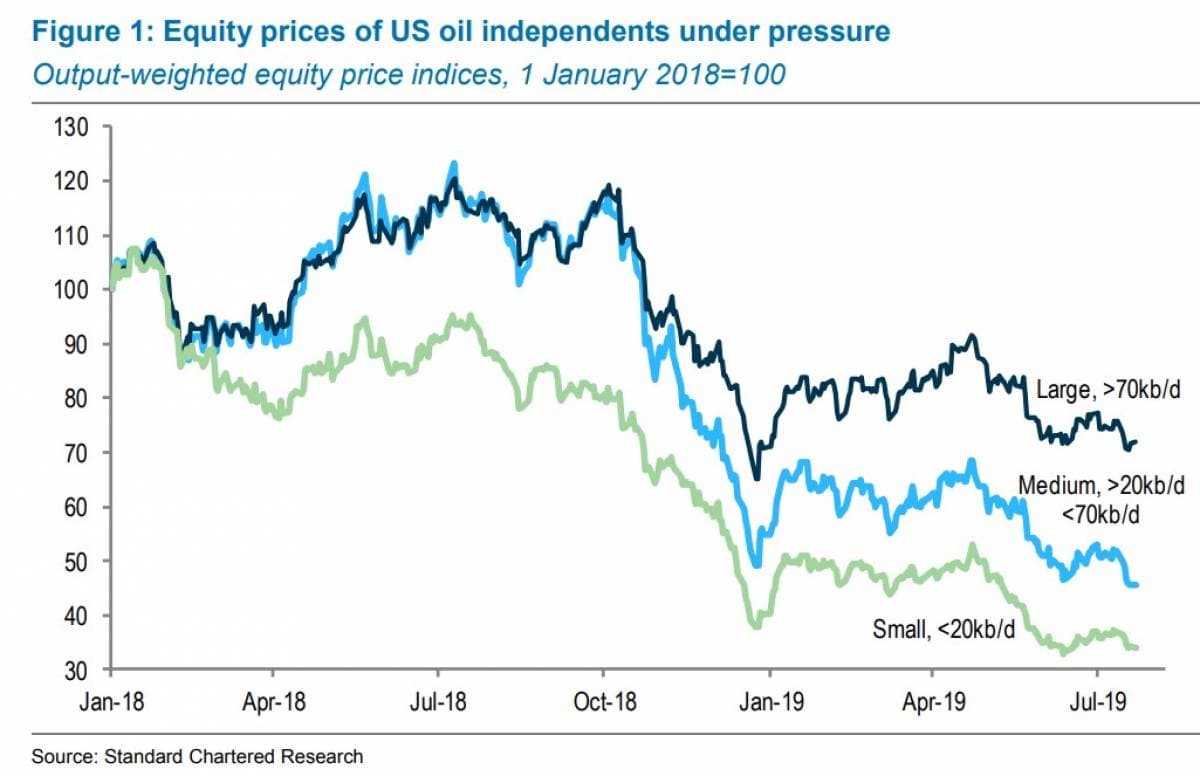 – As the earnings season gets underway, the U.S. shale sector has been hit hard by waning investor interest. “We expect the tone of the reports to be downbeat; we think that the average company guidance on future activity is likely be revised lower,” Standard Chartered wrote in a note.

– Drilling activity has slowed significantly. Standard Chartered said that drilling may not rebound until WTI rises to $66 per barrel, “which is above the surveyed companies’ price expectation over the next two years.”

– But the largest oil and gas companies are doing much better than the smallest. “We calculate that an output-weighted basket of small company equities (less than 20 thousand barrels per day, kb/d) has lost 66% of its value since the start of 2018,” Standard Chartered found. Meanwhile, medium-sized companies with production between 20,000 and 70,000 bpd saw their shares lose 54 percent of their value. The largest only lost 28 percent.

– “With the outlook soured by unexpected technical and geological challenges in key regions, low oil prices, and even weaker natural gas prices, we expect oil and gas activity and q/q shale oil output growth to remain muted in H2-2019,” the investment bank concluded.

6. Lithium prices down as supply continues to rise 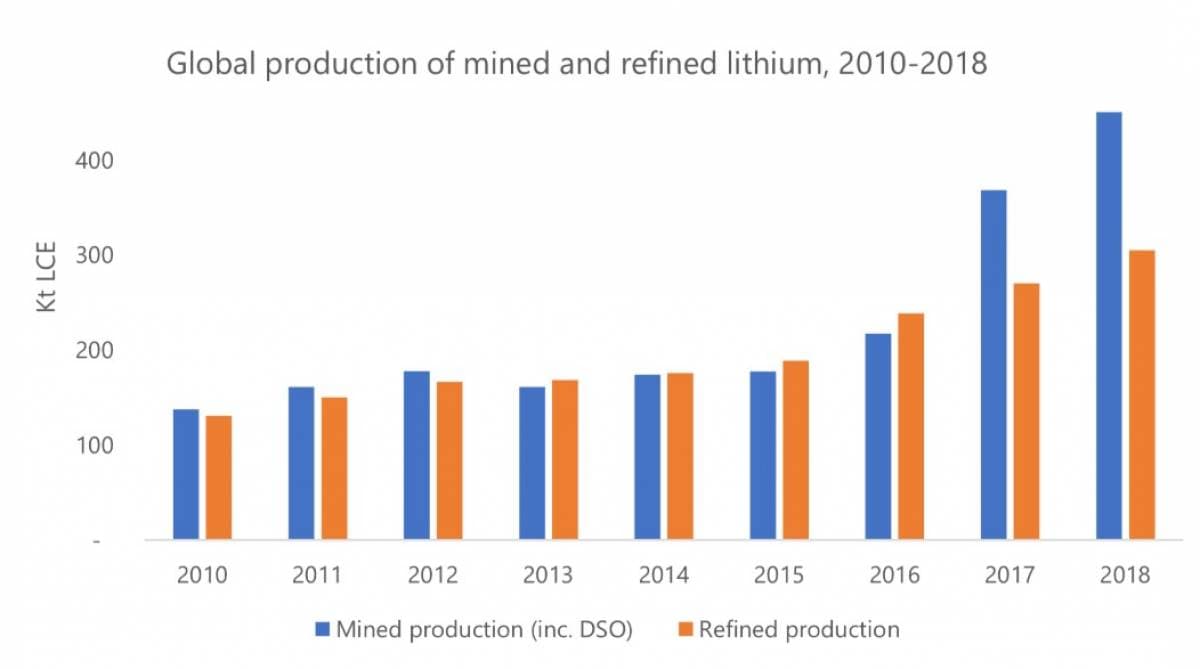 – Despite soaring demand for lithium in electric vehicles, prices are down as supply continues to grow.

– A few years ago, analysts worried about constrained supplies, but production has ramped up in China, Australia, Chile and Canada.

– Roskill says Chinese supply has played a critical role in driving down prices. In 2018, “Chinese battery grade lithium carbonate prices fell from US$21,700/t in Q2 to US$11,450/t in Q4, as increased production from domestic brine operations, albeit of poor-quality materials, alleviated tight supply in the Chinese market,” Roskill said in a report.

– But demand is still rising and more supply will be needed in the years ahead. Demand is expected to increase five-fold over the next decade. 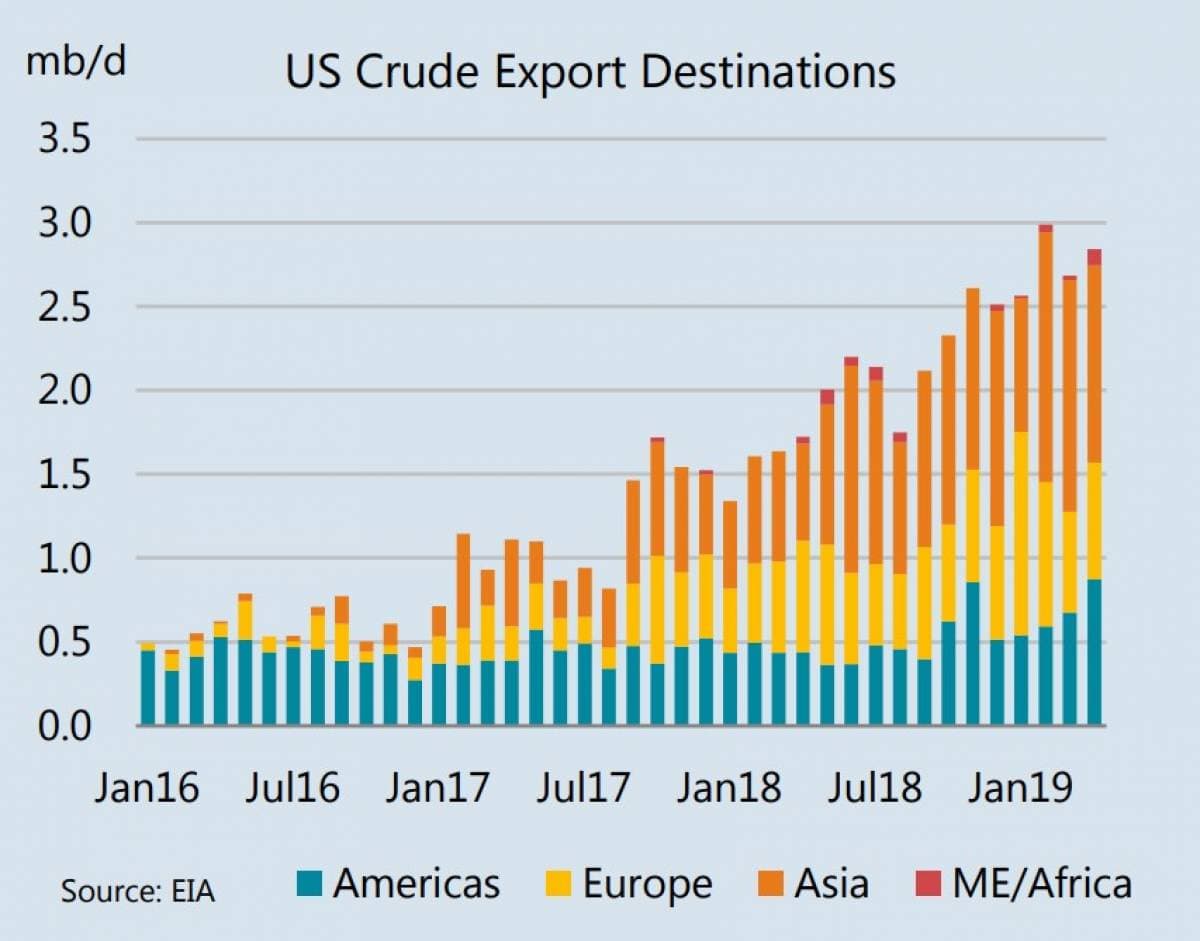 – The U.S. has become the fifth largest oil exporter in the world after Saudi Arabia, Russia, Iraq and Canada. The U.S. has averaged 2.8 mb/d of oil exports this year, up from less than 0.5 mb/d prior to 2016.

– Despite the lightness of oil from U.S. shale, exports continue to rise.

– The UK and the Netherlands have also purchased cargoes this year, but in the Mediterranean, U.S. crude is less competitive given light supplies from Libya, Algeria and Azerbaijan. “Also, due to lack of deepwater ports in the region, VLCC shipping economics are less favourable,” the IEA said earlier this month.

– China emerged as a top buyer in 2017, but those purchases fell sharply late last year as the U.S.-China trade war ensued, although shipments resumed a bit in April.

Previous PostSE: Starbucks CEO Johnson Is 'So Bullish' on China for the Long-TermNext PostAn English Misunderstanding of Iran