U.S. Services Growth – Something Wrong With The PMIs Perhaps

We’ve all got to agree, admit perhaps, that there is no one single nor even set of numbers that will tell us exactly what is happening out there in something as complex as the US economy. This is the central point of Hayek’s “The Pretence of Knowledge”, that we can never gain real time information on something so large. True, he then went on to use this as proof that it’s never possible to pan an economy but we can use the same insight here about our investments.

It’s all too much, complex, chaotic, swiftly moving, for it to be possible to abstract reliable and timely information from what’s going on out there. Sure, we can count this and that and within an acceptable range we’ll be about right. But about isn’t really all that greatly useful.

A 10% fall in GDP – about the second quarter for the US on a quarterly basis, that 33% being the same number annualised – is as clear and obvious as a punch to the mouth, as would be a rise of the same amount. One or three percent is much more difficult to spot in anything like real time.

The same is going to be true of marginal differences in employment, we use 100,000 jobs either way as our error bar for a good reason. And so on across all economic indicators.

We also do the best we can of course. But there are times when numbers come in that really can’t quite be true.

Services are some 80% of the US economy and so we can take their growth or contraction as a pretty good proxy for the economy as a whole. We can also do the PMI thing and go and ask people what they’re gearing up to produce. This is also – usually – a pretty good leading indicator.

Except this one jibes rather with the other things we’re being told about the economy out there:

The seasonally adjusted final IHS Markit US Services PMI Business Activity Index registered 50.0 at the start of the third quarter, up from 47.9 in June and improving on the ‘flash’ estimate of 49.6, to signal a stabilization in service sector business activity. 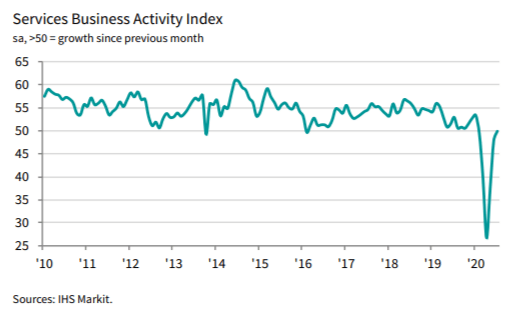 (US services PMI from IHS Markit)

Service providers recorded the first increase in employment since February in July, as pressure on capacity due to COVID-19 restrictions on business processes causing delays to the handling of order books. Although only marginal, the expansion in payroll numbers signalled a turnaround from the marked contractions seen in April and May.

Firstly, as we know substantial parts of the service economy have only recently opened up again. And the PMIs should be about output, business etc from the immediately preceding period. So, the June numbers should show what has changed since May and so on. they are *not* supposed to be about changes from normal. The idea that as the economy opens up in July that the service sector is only flatlining from June seems most, most, odd.

The economic hip bone really is connected to the economic thigh bone. Or, as Paul Krugman has put it, economies have to add up. If this one thing is happening over here then we can check because if it is then this other thing over there must, by definition, be happening. This isn’t quite definitional but it’s close enough. If millions are being employed again then the services sector cannot be standing still from last month’s numbers. It really must be expanding.

The Institute for Supply Management also issues a PMI for the services sector and that’s showing substantial growth:

The composite figure of 58.1 percent, powered by positive rates of change in business activity and new orders, indicated U.S. services sector expansion for a second straight month. However, in a week of closely watched jobs reports, the Employment Index reading of 42.1 percent — a 1-percentage point decline, and in contraction territory for the fifth month in a row — was an ominous sign for a sector that makes up almost 90 percent of the U.S. economy.

The headline reading makes more sense considering the above. But that contraction in employment makes near none at all given the actual employment and unemployment numbers. If millions of people a month are coming off unemployment and also the employment to population ratio is rising then the services sector cannot – OK, almost certainly cannot – be shedding labour. 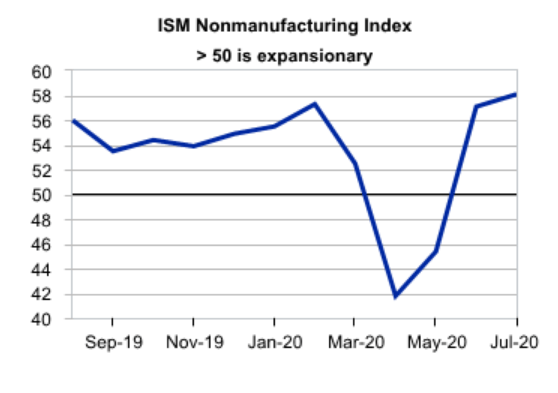 (ISM services PMI for US from Moody’s Analytics)

So, what are we to make of it all? I am simply going to retreat to the Hayekian point at the top. Even in theory, let alone practice, it is impossible to gain accurate and timely information on what is going on out there in that massive economy. The best we can do is partial insights which come with wide error bars.

We do end up having to decide, on our own really, how the economy is doing given these problems with detailed numbers. My opinion is that the economy is growing about as fast as it ever has done. Yes, this is entirely a feature of the recent slump in that same economy. We’re not going to know whether – or when – we get back to where we were in February until a couple of months after it has happened. That’s just the way it is sadly.

It is, obviously, a little difficult to work out what is happening here. But the hard numbers we’re getting – those going back to work for example, – might usefully be given more weight than those which are opinions, as in the PMIs. Which means that the markets are currently about correctly priced. For they are already discounting a relatively swift return to normality. It’s information against that idea that is going to change market indices.