The big thing we’re interested in is, well, has attempting to revive the economy actually revived the economy? My argument is that yes it has and I’m backed up by most of the economic numbers we see.

This doesn’t mean that all is milk and honey from now on. We still don’t have an effective vaccine, the virus is returning in places, more lockdowns are possible as is happening in Europe. True, the economic effects of lockdowns will be lesser than last time, partly because across the board stoppages of industry just aren’t going to happen again, partly because we’ve all worked out how to still work even with social distancing. At least, in large part, concerts and bars are still having a hard time of it but much of the economy can now operate even with social lockdowns.

The big question being considered here though is not what might happen with the disease. Rather, has the economy reached self-sustaining recovery from the spring? I would argue yes.

The argument in favour of stimulus is twofold. Firstly, we’d prefer people not suffer from happenstance so, send out the cash. More than this though it’s entirely rational for everyone to hunker down and save in such times. But that very act, if we all do it, is what will make the economic future so dismal. So, we want to boost confidence enough that people will in fact go out and spend.

If we do this then it might be that retail sales bounce but that might just be pent up demand. Or, perhaps, we’ll have got confidence over that hump and the economy returns to its normal growth path.

Sure, there will be bits of the economy that are entirely shafted by the exigencies of this new world but that might be 5% or so of what we used to do. That’s going to be hard work figuring out what we do there. But the rest of it? If it bounces back – if – is that bounce back going to be sustained or is it more of a dead cat bounce?

My argument is that the US (and, to much the same extent, the UK, China has provably done it as well given that they’re a couple of months further along than we are) has done enough for the recovery to be that desirably self sustaining.

This doesn’t mean that everything is complete as yet. It also doesn’t mean that future events can’t knock the economy off course. But that stimulus worked, we’ve had the Va shaped recovery, is a significant underpinning for current stock market levels.

We have the numbers for personal income and outlays for September:

We can also pick up the charts for this: 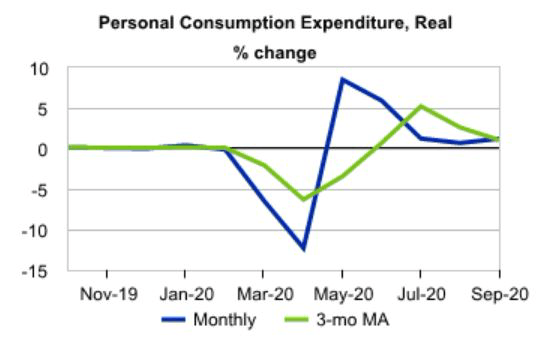 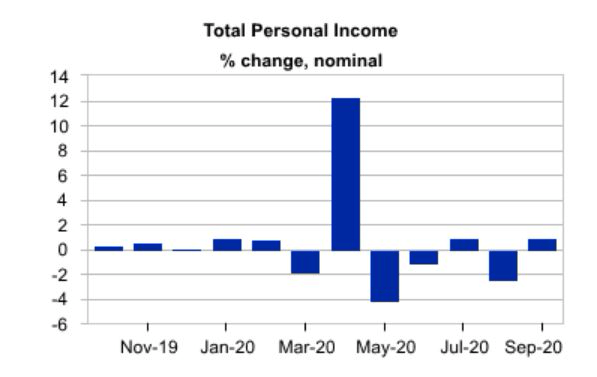 As we can see income rose dramatically during the lockdown – all that stimulus – and spending collapsed. This must mean that the savings rate soared and it did, to 35% or so.

What we want to be seeing is that personal income settles, so does spending. We can see those two right there. We also want that savings rate to fall back to something a little closer to normal. Which we are:

Now, the way that a lot of people were saving was by paying off credit card debt – at one point the Federal Reserve reported this was falling at a 63% or so annual rate. What we’re seeing here is that savings – and thus percentage of personal income which is being spent – is getting closer to that more normal 7 or 8% we had in February. But we can also see that there’s more to go. There’s firepower still in reserve.

We also just had the GDP numbers to end September. After a 33% rise in the quarter we’re about 9% down from where we started from. We’ll have had some more in October, something we can see from the unemployment numbers, so, yes, it’s reasonable to think that we’re perhaps 5% or so behind out pre-pandemic starting point. Given how far we fell I think it’s reasonable to call that a V shaped recovery.

In the absence of any further disasters I think this has reached self sustaining lift off. Spending is back, incomes are, the savings rate is still higher than normal and we can expect that to fall in the near future, powering a continued surge in the economy.

Again, I think it would be unreasonable to insist that it’s going to bounce back all the way. There’s going to have to be some recalculation, not just bounce, for the last few percent of social distancing affected sectors.

Well, some of this is just me enjoying reality turning out like I said it would. That’s always gratifying. A swift bounce back to a little behind where we started from.

But this is also exactly what stimulus was meant to achieve. This is what either Keynesian stimulus, or if you prefer monetarist helicopter money, was meant to do. It’s done it. Huzzah.

We do still have to worry about future events, further outbreaks and lockdowns. But in terms of what we know right now we’re back, pretty much.

The importance of this for us as investors is that the markets are currently around priced for this to be true. That it’s turning out to be true doesn’t mean a further leap upwards. But it significantly reduces the chances of a surge downwards again.

That is, current market pricing is about right given the macroeconomic background. Our task as investors is therefore to investigate microeconomic factors, specific stocks and situations.