U.S. Equities Will Have A Bumpy Ride In The Next 3 Months

The past two weeks removed many clouds that were overshadowing the prospects of global markets – more than any time since the beginning of the year. The US election provided a decent conclusion for investors; the prospect of a more stable executive leadership combined with limited prospects for tax hikes or increased regulation. This seemed eventually to be a better conclusion than the initially envisaged conclusion of a Democratic clean slate, which could have provided faster and larger fiscal stimulus but with the potential for higher taxes and increased regulation. And then the news of a potentially successful vaccine to be rolled out within weeks completed the rosy picture.

Financial markets are exploding northwards, with US markets in record territory – once again. Is this another frantic, irrational bubble, extending what could be a bubble building up since late March? It is tempting to make that simple conclusion, but the economic backdrop makes the picture more complicated. While the US economy, consumer spending and industrial production have recovered most of the ground lost from the pandemic, many bumps are ahead before we can call timeout on economic uncertainty.

In the last meeting of the US’s Federal Open Market Committee before Covid-19 exploded into a global pandemic, the notes of the meeting were quite positive on the US economy. The notes indicated that

“the labour market remains strong and that economic activity has been rising at a moderate rate. Job gains have been solid… and the unemployment rate has remained low. Although household spending has been rising at a moderate pace, business fixed investment and exports remain weak. On a 12‑month basis, overall inflation and inflation for items other than food and energy are running below 2 percent…surveybased measures of longer-term inflation expectations are little changed.” (Source)

Improvement in the US labour market has slowed down, and is unlikely to reach pre-pandemic levels in the near future

The labour market – the main driver of economies and of Fed policies – needs a closer look. In April, the unemployment rate in the US jumped to 14% – from 4% a few weeks earlier, according to the US Bureau for Labour Statistics (Source). This is down to 6.9% in October. The rate of job creation has been slowing markedly though over the past six months, although it’s still at three times the level of monthly job creation in the months leading up to the start of the pandemic.

Notable points in the last result of November non-farm payrolls is that leisure and hospitality – the most hit sectors by the pandemic – represented almost 42% of the 638,000 new jobs created. Leisure and hospitality has added 4.8 million jobs since April, but employment in the industry is still down by 3.5 million since February. The rate of job creation, especially in the hardest-hit leisure, hospitality and non-food retail sectors will be hit in Q4 2020 in the US and Europe, due to the second wave and the associated lockdowns.

Whether the unemployment rate will eventually reach pre-Covid levels in 2021 is anyone’s guess. My guess is no. The second wave of Covid-19 infections is clearly more aggressive than the first, and has resulted in sporadic lockdowns and restrictions across the US that are likely to leave output and employment creation more depressed in Q4 than the previous quarter.

Explosive debt is here to stay

With no prospect for tax increases under a divided Congress, and no near-term prospect of explosive GDP growth, the ratio of debt/GDP will remain elevated for the foreseeable future. The good news is that the Fed will keep interest rates low for longer to keep the debt burden manageable for government, for households and for corporates.

Default rates are increasing and could weigh on economic recovery

“The coronavirus pandemic will result in a multiyear period of elevated US institutional term loan and high-yield bond default risk due to the depth of its effect on the economy, uncertain duration and maturity wall creep. This could lead to higher than normal defaults through 2022. Our three-year 2020–2022 cumulative US default rate forecasts for term loan (LL) and high-yield (HY) bonds are 17%-20% and 15%-18%, respectively. This forecast compares with the three-year cumulative default rate of 15% for LL and 22% for HY bonds from 2008 to 2010 occurring as a result of the Great Recession.”

Mortgage delinquencies are another red flag

The main reason behind the 2008-2009 global financial turmoil is worth a focused look. The Mortgage Bankers Association reported the following in its most recent August report:

“The COVID-19 pandemic’s effects on some homeowners’ ability to make their mortgage payments could not be more apparent. The nearly 4 percentage point jump in the delinquency rate was the biggest quarterly rise in the history of MBA’s survey…The second quarter results also mark the highest overall delinquency rate in nine years, and a survey-high delinquency rate for FHA loans…delinquencies are likely to stay at elevated levels for the foreseeable future…The seriously delinquent rate, the percentage of loans that are 90 days or more past due or in the process of foreclosure, was 4.26 percent, the highest rate since fourth quarter of 2014″ (Mortgage Delinquencies Spike in the Second Quarter of 2020)

Mortgage delinquencies track closely with the availability of jobs. The five states with the largest quarterly increases in delinquency rates were New Jersey, Nevada, New York, Florida, and Hawaii – all with a prevalence of leisure and hospitality jobs that were especially hard-hit by the COVID-19 pandemic. The continuous recovery in employment should be directly correlated with the reduction of delinquencies, although the full extent is yet to be seen. Also, the introduced loan deferral and modification options that present alternatives to foreclosure for distressed homeowners should be helping to reduce foreclosure rates.

GDP recovery has been encouraging…

… but Market Cap measures are not

The image that is really telling is US stocks market cap to GDP. One way of looking at stock valuations is the market value of all publicly traded companies as a percentage of GDP, which Warren Buffett described as “the best single measure of where valuations stand at any given moment” in a Fortune interview in 2001. “Two years ago the ratio rose to an unprecedented level,” Buffett said shortly after the tech bubble had burst. “That should have been a very strong warning signal.” (Infographic: Are We in a Stock Market Bubble?)

As the following chart shows, the ratio of market capitalizations (as measured here by the very broad Wilshire 5000 index) to GDP is 15% higher now than it was shortly before the dot-com bubble burst, and almost 50% higher than when the housing bubble of 2008 burst. Using quarterly average closes of the Wilshire 5000 Total Market Index and dividing it by quarterly GDP figures shows that the ratio is unprecedentedly high at the moment, which, following Buffett’s rationale, could be seen as an ominous sign of things to come. Add to that a P/E ratio of 31x for the S&P 500 – the highest since September 2009, and the overvaluation argument starts to gain more weight. 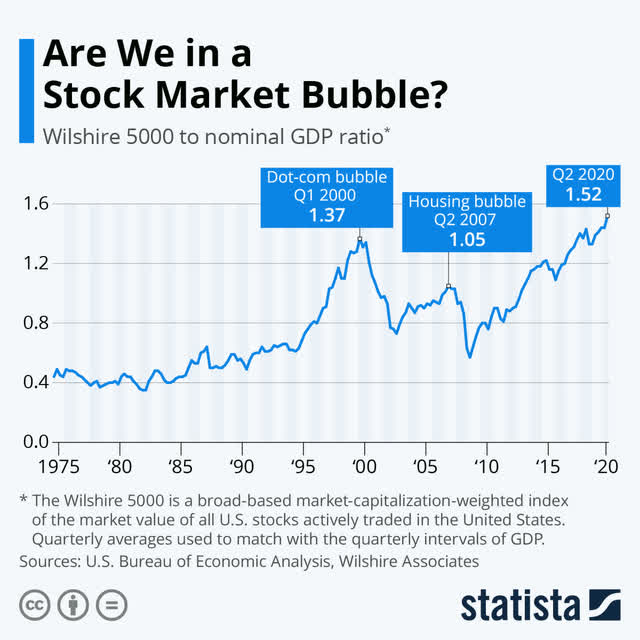 The global economy will not go back to normality in 2021, and corporate profits of most sectors will remain subdued

2021 is expected to be a tough year. While defaults and bankruptcies have been limited in 2020, so far, due to government and Fed support, many businesses are likely to reach the end of the road of commercial feasibility in 2021. Beyond 2021 is anyone’s guess. With indicators flashing red, including slowing rate of employment creation, ballooning debt, exhilarating levels of defaults and clear overvaluation parameters for equities, a risk of a burst to the equity market’s bullish ride will continue to linger for the foreseeable future.

While many businesses have navigated the pandemic successfully and effectively, investors could be asking too much from those companies in terms of future expectations for unscathed financial performance. And to that the typical high level of volatility that occurs in the end of a year and at the beginning of a new year, and the uncertain and volatile outlook for the next 3 months seems to be certain. The road ahead will be very bumpy, investors should be wary.

Previous PostGerman Doctor Raided By Armed Police During Live YouTube StreamNext PostDayton at 25 – After a quarter of a century of peace, Bosnia remains wretched | Europe