U.S. Employment Surges – Looking V-Shaped To Me, This Recovery

We know, obviously, that lockdown – and the effects of the disease without lockdown to be fair – have created a deep, deep, recession. This is the worst since whenever, certainly since we started to have detailed economic statistics post-WWII.

The big question though is how long is this going to last? As I’ve pointed out the economy comes to something like a halt on the production side every Friday evening and we seem to have little problem in getting it going again come Monday morning. But as every sportsman or musician knows the longer you go without doing something the harder it is to come back – in those cases it’s muscle memory that fades. It’s an analogy and an analogy only but we’re pretty sure the same thing happens to economies. The longer they’re shut down the more permanent damage there is to productive capacity.

So, we’ve this thing we want to know – how long is it going to take to recover? One indication is that the US closed partially, not all of it at the same tie. This state by state system makes us think that recovery will be faster. But we also want to look at whatever indicators we can gain access to to test this.

At which point the employment numbers. If employment comes roaring back then we are safe in assuming that the recovery will be reasonably swift – that’s what recovery is, after all, everyone going back to work.

ADP is a payroll processing firm which releases its estimate of employment each month. They handle a large enough payroll that they’re a very decent sampling of the US economy all on their own:

Private sector employment increased by 2,369,000 jobs from May to June according to the June ADP National Employment Report®. 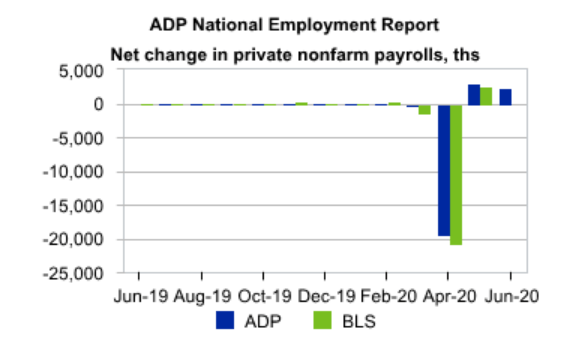 Obviously we’re not quite roaring back as yet but we’re not digging ourselves any deeper into the mire and we are gaining some employment at least.

But it’s not necessarily true that the one sample is giving us the full picture. So, the official figures.

The BLS report is much more encouraging:

Total non-farm payroll employment rose by 4.8 million in June, and the unemployment rate declined to 11.1 percent, 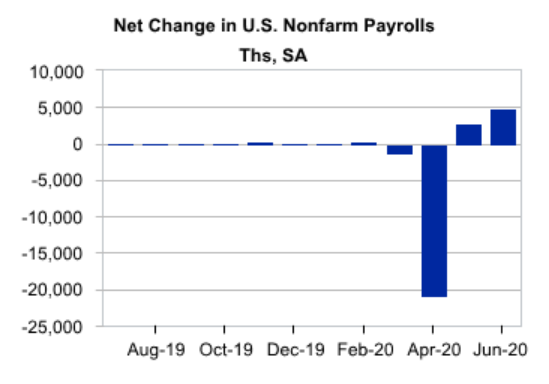 We’re actually some one third of the way back to where we were and the country isn’t even fully open again yet. Sure, things can go wrong again but this is at least looking like that (and my) prediction of a V shaped recovery is going to come true.

We also have a weekly number, initial claims for unemployment. This is rather different, as it’s a flow, not the stock of unemployed people. That’s continuing claims. This is still high but that’s not actually the point. The number of people going into unemployment is uncomfortable for them of course but it’s the stock of people stuck there that matters. So, if hiring out of unemployment is higher than initial claims then we’re still recovering:

In the week ending June 27, the advance figure for seasonally adjusted initial claims was 1,427,000, a decrease of 55,000 from the previous week’s revised level. 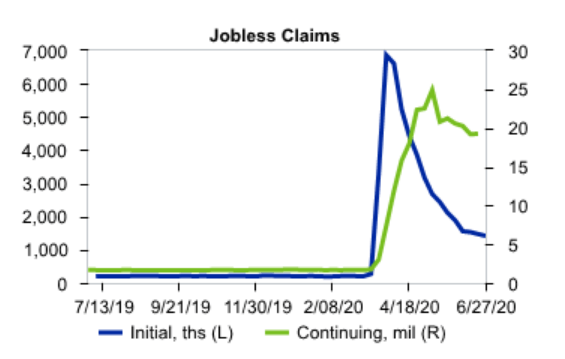 We are also told this:

Our question is well, how long is this all going to last? If everyone gets back to work then GDP will recover and so will corporate profits. As investors of course it’s that least we’re interested in even if as citizens we might pay attention to the first.

The best evidence that we’ve got is that unemployment is falling rapidly. One thing the US economy really is is flexible, able to adapt to changing circumstances, and that is apparent here.

We would thus conclude that, at least as we know so far, the idea of a V shaped recovery is not disproved.

My view has long been that the US will have that V shaped recovery. I’m not seeing anything to tell me otherwise as yet either. This then tells me that the stock index lows of some weeks back were a glaring buying opportunity, as I said at the time.

Market prices, the general level of them, now predict that V shaped recovery along with a very slight discount for the slight possibility that it won’t happen. Thus we’ve not got that glaring macroeconomic signal to buy, buy, buy, as we did have.

Macroeconomics, that is, doesn’t have a strong signal for us either way. We’re back to the boring, and hard, work of having to look at individual situations and companies.