As I noted last week in US dollar stalks risk markets everywhere, the most defining force in markets globally since March has been a falling US dollar, which has boosted the price of assets on the opposite end of the global markets teeter-totter.

Morgan Stanley analysts noted on Friday that the U.S. dollar (DXY, 0.24%) index was the most oversold since 1978 and trading 3.6 standard deviations below its twelvemonth average.

As shown in my partner Cory Venable’s updated chart of the dollar index below, a hold in the 92 area (pink band below) and close above 95 would reaffirm the upward channel that has held since 2011 and, with it, the next wave of pain for a world of highly levered, reckless and wilfully blind asset holders.

The reality is that well before the pandemic crushed the economy, corporate earnings have been falling for over 18 months as debt-weight and consumption exhaustion led to falling sales and economic growth since early 2019.

While a handful of tech stocks (AMZN, OTC:APPL, GOOG, MSFT and FB –blue line below) have cloaked broad weakness and held-up indices and speculative sentiment, 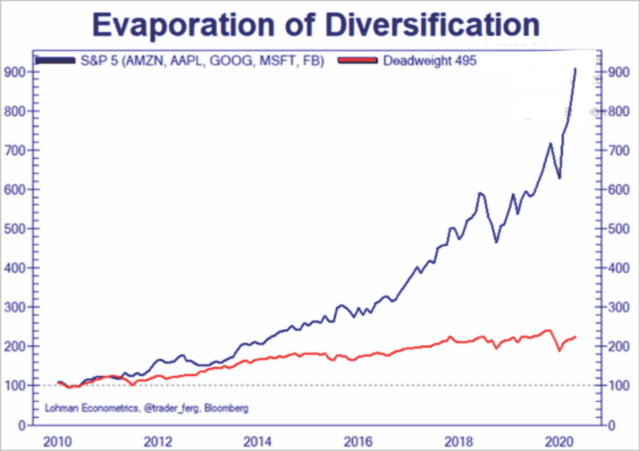 (remaining 495 companies in the S&P 500 in red since 2010), the rise has been almost entirely attributable to multiple expansion– paying more and more for lower cash flows–as explained well by Lance Roberts this week in Justifiable Bullishness or Willful Blindness?

We took capital gains and covered our long USD exposure in March. Being out of the dollar since has been the right call. The critical question is what happens next. Confident dollar bears are ubiquitous today for sure. The dollar is down, but is it out?

Aware or not, those with capital to lose have all placed our bets.