U.K. Investors, Make Sure To Look Across The Pond

The London Stock Exchange’s performance has been underwhelming over the last few decades. Since 2010, the FTSE 100 is actually down 5.5%. This compares to a rise in the Dow Jones of more than 125%. The two performances couldn’t be seen as more polar opposites.

This isn’t simply an individual issue, but one of many systems. The French market shows similar returns to that of the UK. The main attributed reason behind this poor performance in comparison to the US, is that business and industry have perhaps taken a backseat to social engineering.

More specifically to the UK, I think it’s more of a matter of the constituents within the UK market. When studying these, it’s clear to see that there are nearly no growth stocks and far more value stocks in play. For a substantial period and particularly recently, the market has favored growth and tech stocks. Looking ahead with the shares that are going to shape the future, I don’t see this trend likely to change and to me, the UK market is becoming more out of favor than ever before.

While the S&P 500 contains many high growth shares, the Dow doesn’t. So why has its performance been so strong? One factor that I believe has had an impact (bar consumer confidence and an improving US economy) is the influence of share buybacks. In the UK, share buybacks are pretty much non-existent, while in the US they are utilized far more heavily as a way of driving shareholder returns over the long run. Although this isn’t the overriding factor, it has certainly had an impact. Since 1997, share repurchases have surpassed cash dividends and become the dominant form of corporate payout in the U.S. 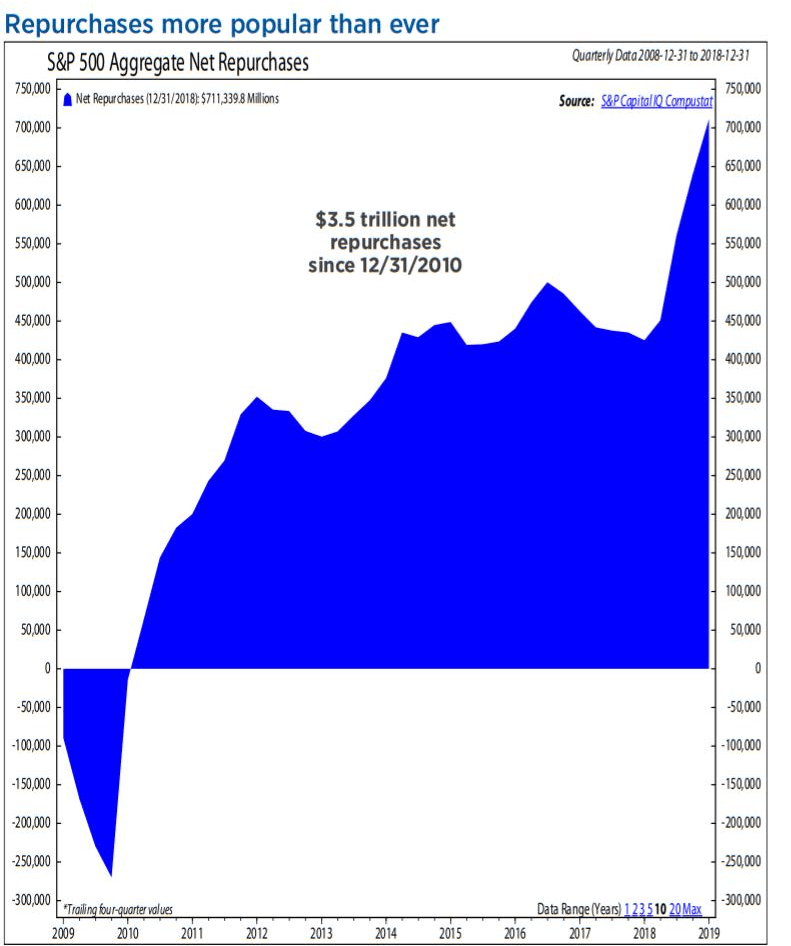 In a Ned Davis research piece, they attempted to examine the impact of buybacks on the overall market. They had four different scenarios and different results:

Now when comparing this to the UK market, the most applicable would be buyback funds used to pay dividends, however, even after deducting the 10% to 2019, the S&P 500 has still delivered 110% improved returns in comparison to the FTSE – a pretty astonishing figure. This proves that although buybacks have had an impact, the favor and success of growth combined with a stronger US economy has had a far greater impact in driving further returns.

READ ALSO  The 12 most common insurance claims around Christmas

It’s time to look across the pond

With the historical performance in mind and some context as to how poor performance has been in the UK previously, it’s time to look ahead. To me, it still looks bleak for the UK market. Simply skimming through the constituents of the S&P and the US market in general, it’s full of sizable high growth technology companies, many of whom haven’t even turned a profit yet. In many ways, this has led investors to see it as a ‘bubble’, primarily because so much future growth is priced into many of the US plays as they trade at far higher valuations. However, there is a clear reason for this, these will be the companies at the forefront of shaping the more globalized future. Big players such as Amazon (NASDAQ:AMZN) and Google (NASDAQ:GOOG) have proved for many years that trading on pricey valuations shouldn’t put investors off and they do so for a reason – they are extremely strong and dominant players who have proved their ability to deliver major growth.

Now turning to the UK market, it is hard to find these huge future players. Yes, we have the likes of Just Eat and Ocado as our major technology players, but that doesn’t compare to the ballpark and offerings of the US market, which is full of many Silicon Valley and future stars. This isn’t to say there isn’t opportunity in the UK market, because there is and I do own many UK shares myself, but I feel many investors should be looking to incorporate more growth shares into their portfolio – particularly after this pandemic where remote working has put many tech plays in the driving seat. Many of the British companies have actually traded in ‘bargain’ territory for some time but have continually failed to deliver, particularly with the historical top 5 constituents making up 38% of the total FTSE 100 market capitalization. 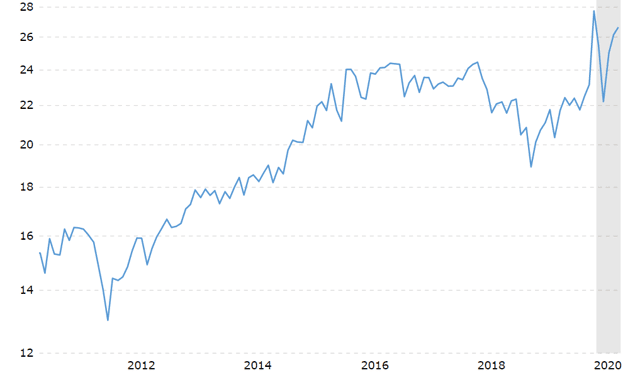 For some time, analysts have favored the UK market primarily for this reason, arguing that it sits in bargain territory, particularly when comparing it to the US. But these forecasts and beliefs have been consistently wrong as the US market is favored. The ‘gap’ between the markets has not adjusted to become more equal but in fact, become even wider. The UK constituents simply have not delivered while the US constituents have, on many fronts. To me, this graph sums up well how wrong analyst forecasts have been in the UK market: 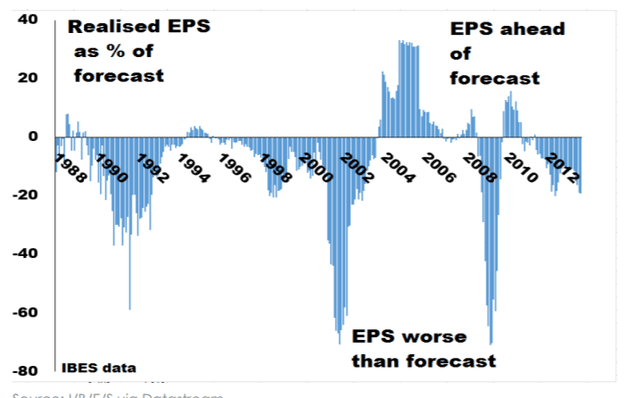 With the exception of the strong run in the FTSE between 2003 and 2007, analysts have largely been wrong when forecasting companies’ profitability. Even when looking at value, the UK market has even further to fall before reaching that true bargain territory. Some call it the ‘Buffett Indicator’, the market cap to GDP ratios have been said by Buffett previously to indicate where there could be ‘deep value’ buying opportunities. The ratio of total market cap over GDP stands at 94%. Whilst this is still low, it isn’t quite as low as the 70-80% area that Buffett deems ‘buying territory’. Of course, this is very assumptive and has actually largely proved to be incorrect anyway, as growth plays have outplayed their value counterparts. It does however prove that these value plays could yet have further to fall in the UK market before they reach Buffett’s ‘buying territory’.

Another factor that may tempt more investors to weigh into the UK market is the dividends on offer, with an average dividend payout in the FTSE 100 of 5.5% as of June 2020. This contrasts with the Dow with average dividends of just 2.5%. Whilst those dividends are certainly lucrative and, with reinvestment, can deliver large long-term returns – buybacks have fueled strong capital appreciation with US shares. Throughout the pandemic, many of these defensive ‘high yield’ names, particularly oil players, have struggled. The same applies for the last few years in the UK market. Many of the big names in the UK market were previously national entities that have been privatized. They have become large dividend yielders such as BT Group (OTCPK:BTGOF) but their share price performance in many cases has been very poor dragging down overall return for shareholders. Yes, there have been some winners such as National Grid (NGG) but many of the FTSE 100 companies themselves are in the ‘tiring’ industries. The FTSE 100 certainly isn’t an area to look for ‘excitement’, a high proportion are found in the slow growth industries such as tobacco and oil. And the index also contains a fair few high street retailers struggling with excess physical retail space, long leases and the UK’s traditional ‘upward only’ rent reviews. These are looking weaker through the pandemic.

More specifically, the recession has arrived

Generally, the economy and the market are two separate things and thus the market does not reflect how the economy is actually performing in any given month. There is extensive coverage of the run-up across the US market vs. how healthy the economy actually is currently, with the two now seeming at opposites to one another. In the UK, many metrics show that the economy is in dire straits. By the end of 2020, it is said that the UK’s GDP will be a colossal 10% lower than the previous year. Many shares are reflecting this anyway with companies struggling to see a recovery from the start of the pandemic. Many of these strugglers are FTSE 100 constituents and the FTSE has therefore also struggled to see a recovery. Many of these still face considerable near-term headwinds that will stop a recovery in its tracks.

Now more than before the market is looking at ‘excitement’, something which the UK market and the FTSE 100 are largely lacking. Growth rates in the UK have been poor with many of the biggest players struggling the most under the current pandemic. The FTSE, unlike the Dow, has struggled to bounce off the lows – with no real catalysts to change this shift over the near term. This pandemic has reminded investors of the need to have growth exposure in their portfolio and no market has better offerings in this regard than the US market. This is not to say that UK investors shouldn’t own UK shares because they should and I do myself as I believe there are some real great value shares out there who do have near-term growth catalysts. This article does suggest that UK investors have now been reminded to look across to the US market and should have some exposure to the high growth US market too, even though the UK market appears such great value – it has been that way for a long time.