Home Financial news Twitter Might Not Beat The Market Even When The Rumored Subscription Tier Goes Live (NYSE:TWTR)
2020-07-132020-07-13By finanz.dk 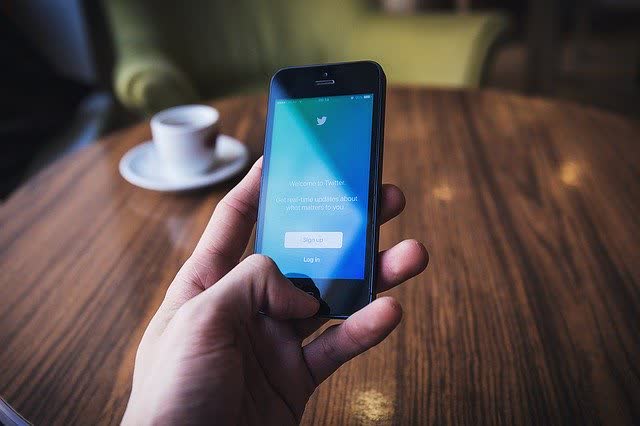 Investing, for me, is not about finding a stock that could give me the same returns as the market does in the long run and being happy about it when I could have actually owned the S&P 500 through an index fund in a hassle-free manner. As an active investor with an investment time horizon that spans a few decades, I take calculated risks in the hopes of beating the market. In other words, I seek alpha (and I write about such opportunities on Seeking Alpha). Twitter, Inc. (TWTR), the social media company that could never deliver promised returns to investors in the last 5 years (shares up 1.87% since June 2015), is making headlines once again on speculation of a subscription service that could charge users a monthly fee for using the platform. I view this as a positive development that could potentially be a partial solution to the undermonetization of its user base. However, I am still convinced that Twitter would, at most, deliver returns in line with the broad market, not the kind of returns I expect for the level of risks that I’m willing to bear.

Here’s what we know so far

Twitter stock popped on July 8 as investors welcomed the rumor that could eventually lead to a higher monetization of its user base. Shares took off as a result of a job posting by Twitter that leaked information regarding the formation of a new team codenamed “Gryphon” to set up a subscription product. This job posting in question was later amended to remove any reference to this new team, only to be edited a second time to include details about this team. See below an excerpt from the job advertisement:

We are a new team, codenamed Gryphon. We are building a subscription platform, one that can be reused by other teams in the future. This is a first for Twitter! Gryphon is a team of web engineers who are closely collaborating with the Payments team and the Twitter.com team. We are looking for a full-stack engineer to lead the Payment and Subscription client work, someone who values collaboration as much as we do and can act as a bridge for the engineering team. It’s a great opportunity for all teams involved!

If Twitter launches this rumored subscription tier for users, the company might have to sacrifice ad dollars in the immediate term until the paid plans gain traction among users, assuming the premium version will come free of advertisements. Wall Street analysts have varying opinions on the success of this planned subscription tier.

At the time of writing this article on July 12, there are many grey areas about this paid tier, and an official statement is yet to be released to the public.

One of the most common investment theses I’ve heard about Twitter is that the stock is relatively undervalued. In each instance I hear this, I remind myself of the risks of investing in a company just because it is comparatively a cheap investment. This time around, many Twitter bulls are claiming that the stock has lagged its peers since the markets bottomed on March 23, which is seen as an indication of good things to come in the future as the stock gains pace to converge with the performance of its peers.

From the look of it, this sounds a viable thesis, as Twitter has significantly underperformed its peer group in this period even though the macroeconomic environment facing all these companies has been identical.

This underperformance of Twitter, on the other hand, should not have come as a surprise. For instance, Twitter shares are up just over 1% in the last 5 years in comparison to Facebook (FB) stock’s 175% gain. This performance comparison serves as a warning sign for investors who are ready to pounce on Twitter purely based on the industry lagging performance in the last few months. This disappointing market performance is nothing but a reflection of its failure to grow despite its peers growing in leaps and bounds. The peer comparison page on Seeking Alpha makes it easy to figure out why Twitter shares are not loved by the market, and here’s a snapshot of a few key ratios I evaluate before investing in a growth company.

Numbers should eventually back the story behind a company, and this has not happened for Twitter for many years. The company has failed to move the needle, and every year that passes by makes it difficult for Twitter to establish itself as a go-to option among advertisers.

It’s become common practice to put the blame on Jack Dorsey for the disappointing financial performance of the company. While a skilled CEO is essential to the success of a company, and I agree with the fact that a full-time executive at the helm of the company would be a positive development for investors, Twitter as a platform has in-built disadvantages in comparison to its peers. These factors, on the other hand, make it difficult for the company to monetize its user base and to attract advertisers to the platform at competitive bids.

First, Twitter is used by many as a news source. From the latest political developments to what goes on with celebrities, it has become the go-to place in this digital era to quickly absorb what’s happening around the world. The 280-character limit per tweet makes it possible for users to scroll through the updates at high speed, which makes it easier to go through many news stories in a flash. In 2019, a Statista survey found that accessing news stories is the number one reason why Americans log on to Twitter.

READ ALSO  SE: The Biggest Obstalces to Diversity, According to Valence CEO

As a Twitter user myself (quite new at it, though), I’ve started enjoying this effectiveness as well. From the perspective of an investor, however, this gives reason to worry. Advertisers ideally want users to spend time on posts so that their products would eventually catch the eyes of consumers. On Twitter, however, users scroll at a rapid pace, making it difficult for a brand to interact with the intended users. In comparison, Facebook, Snapchat, and Instagram are platforms people use to interact with each other, stay connected with friends and families, network with new people, and basically live an “online life”. On these leading social media platforms, users are ready to engage more with brands, and advertisers are more inclined to spend their marketing budgets on such platforms which could yield better results for their campaigns. Illustrated below are the median engagement rates with posts on Facebook and Twitter, and the results are self-explanatory. 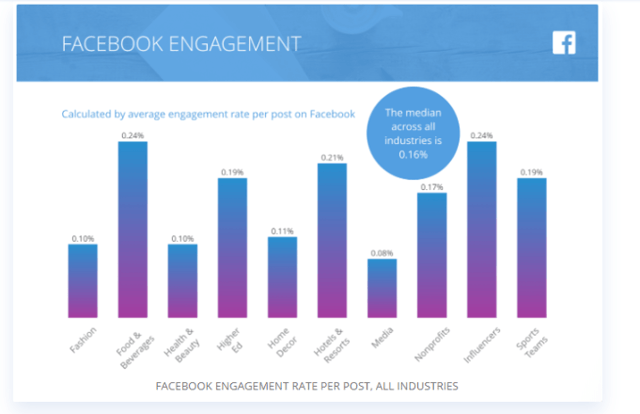 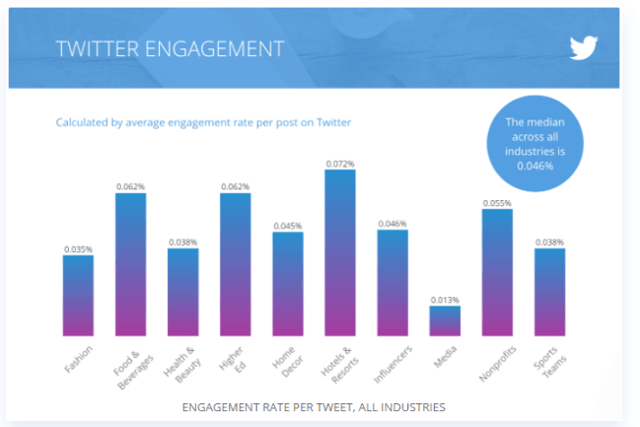 Second, Twitter’s international presence is not as strong as its competitors. In high-growth regions such as India and Brazil, it lags the industry leader by quite a margin. 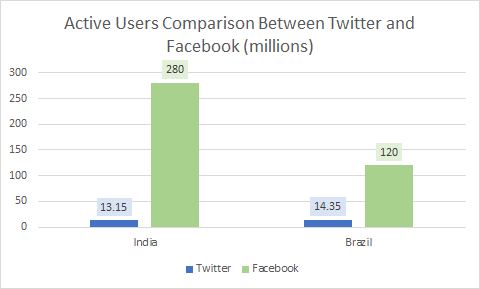 Both these markets are hot favorites among multinational companies targeting outsized growth. Facebook is already serving the bulk of digital advertisers in these regions, and Twitter is playing catch-up. This, I believe, will make life difficult for the company in the future as new economic powerhouses emerge.

Third, Twitter will face an uphill battle to improve its margins and important performance evaluation metrics such as return on equity. Because Facebook has a head start, Twitter has been forced to reduce its cost per impression over the last few years to entice advertisers to hop on board. While I see nothing wrong with this strategy, it highlights the challenges faced by the company to meaningfully grow its revenue. 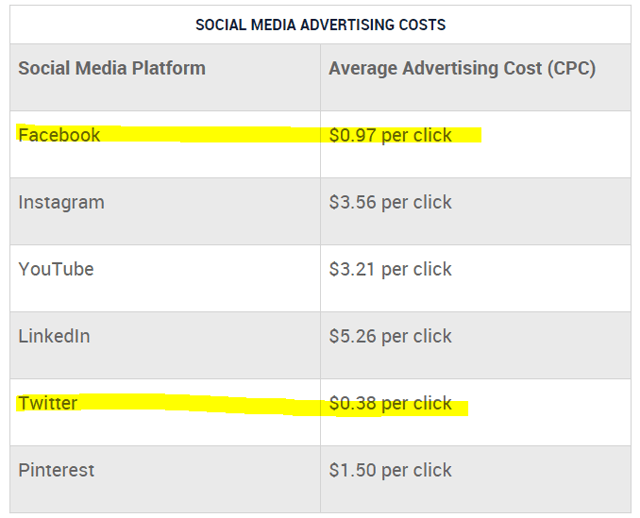 The persistently low ROE and ROIC numbers of Twitter will result in the stock trading at a discount to the industry average earnings multiples, which is what we have seen for quite some time now.

Not every company operating in a lucrative industry delivers attractive returns to investors. A classic example is the market performance of Walmart Inc. (WMT) and Amazon.com Inc. (AMZN) this year. There was never a doubt about both these companies financially benefiting from the stay-at-home directives issued by state governments and the stock pile-up of essential groceries. 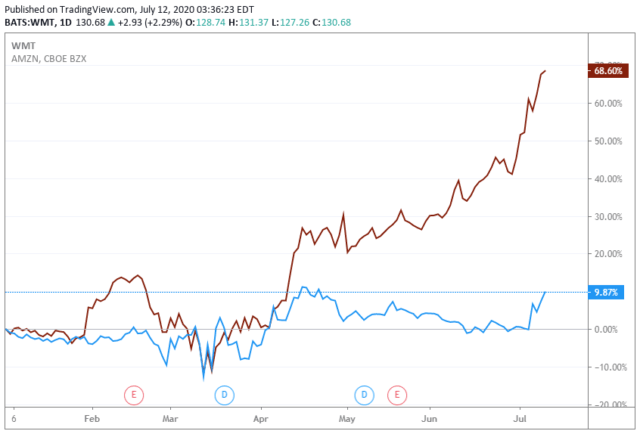 In April, Amazon stock broke out in anticipation of higher sales, while Walmart lagged even though the company was expected to perform well. This goes on to highlight the fact that industry-leading companies often take off once the macroeconomic environment turns favorable. Twitter has been the Walmart of the social media industry for more than a few years now.

Even though Twitter will be in a good position to improve its numbers if the subscription tier is rolled out soon, Facebook would still be doing better as a result of its recent investment in Jio Platforms and product launches such as Facebook Shops, Messenger Rooms, and WhatsApp Pay. As long as the threat from Facebook remains unaddressed, I believe Twitter will continue to underperform the sector, as ad dollars are unlikely to flock to Twitter. (I believe advertisement revenue will still account for the bulk of revenue even after the subscription tier is rolled out.)

To deliver market-beating returns in the long run, a company has to either be significantly undervalued or be the dominant player in the market, which ensures the ability to earn economic profits. Twitter, in my opinion, is neither. There’s no question about who the market leader is, and from a valuation perspective, shares are cheap based on a few multiples, which is justifiable considering its industry-lagging revenue growth in the last half-decade (highlighted below are the cheap multiples). 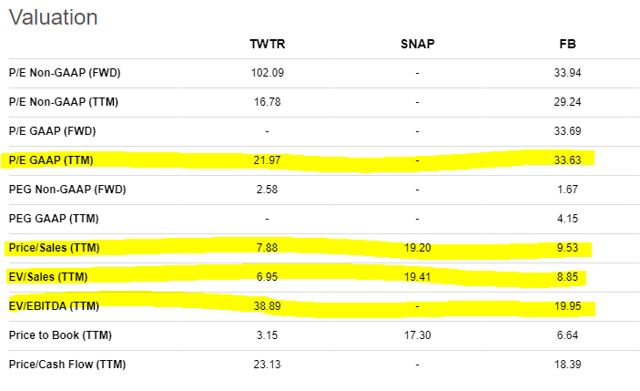 Because of no clear undervaluation and the continued inability of Twitter to become the industry leader, the stock lacks what I call the “mojo” to become more appealing to investors. This, on the other hand, has historically led to meager returns from Twitter, even though its financial performance has improved notably over the last few years. I fear that this will continue to be the case for quite some time, and I’m not thinking about underestimating this unique risk of investing in the company.

There is no question about Twitter being a leading social media platform. As I continue to get accustomed to the platform and what it has to offer, I’m confident that Twitter could become my go-to place for breaking news. The core values on which the platform is built on and the user behavior, however, paint a bleak outlook for the ability of the company to monetize its user base. The possibility of a new revenue stream in the form of a subscription tier certainly makes Twitter a much more attractive play than it was a few years ago. However, the company is still likely to remain the underdog of the industry for quite some time, which is a good enough reason for me to stay on the sidelines and let Facebook compound my invested capital.

If you enjoyed this article and wish to receive updates on my latest research, click “Follow” next to my name at the top of this article.

Disclosure: I am/we are long FB. I wrote this article myself, and it expresses my own opinions. I am not receiving compensation for it (other than from Seeking Alpha). I have no business relationship with any company whose stock is mentioned in this article.