Twitter froze the account of the Trump campaign on Wednesday for violating its misinformation rules after it posted a video in which the US president said children were “almost immune” to coronavirus.

Facebook had taken action on the same post, saying the video “includes false claims that a group of people is immune from Covid-19 which is a violation of our policies around harmful Covid misinformation”.

The company said it was the first time it had removed one of the president’s posts for breaching its coronavirus misinformation rules.

According to the Centers for Disease Control and Prevention, while adults make up the majority of cases, “some children and infants have been sick with Covid-19”.

The move marks the tougher stance that Twitter has taken towards the president in response to some of his more controversial tweets. Facebook has also begun to take more action on misleading posts after being accused of being lax relative to its smaller rival.

Democrats have welcomed the crackdown on the president’s social media posts but Republicans have accused Twitter of trying to censor conservative voices in an effort to help Joe Biden, the Democratic nominee, in November’s presidential election. The president himself has also openly sparred with the internet platforms, alleging that they are trying to silence him and sway the election.

Courtney Parella, deputy national press secretary for the Trump campaign, said on Wednesday: “The president was stating a fact that children are less susceptible to the coronavirus. Another day, another display of Silicon Valley’s flagrant bias against this president, where the rules are only enforced in one direction. Social media companies are not the arbiters of truth.”

Mr Trump has come under repeated attack for misleading and inaccurate claims since the start of the pandemic, including his comment that people could protect themselves by ingesting disinfectant. 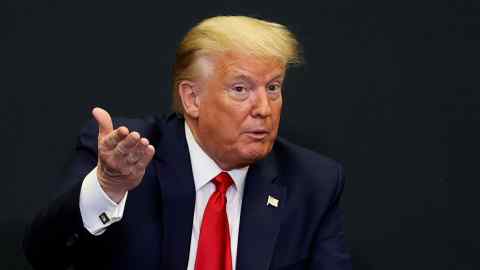 Last week, Twitter temporarily suspended Donald Trump Jr, the president’s son, from tweeting for breaching misinformation rules after he shared a video in which politically affiliated doctors said shutdowns and masks were unnecessary and promoted the use of hydroxychloroquine to treat coronavirus. The antimalarial drug has been labelled as risky by the US Food and Drug Administration.

The president himself also retweeted the video, which was removed from his feed and replaced with a label from Twitter saying it was “no longer available”.

Pressed about his comment to Fox at a press conference on Wednesday evening, Mr Trump said that while children could get coronavirus, the disease tended to have almost no effect on them. Referring to Covid-19 as the “China virus”, the president said children had very powerful immune systems and “handle it very well”.