The irony with Turtle Beach (HEAR) is that 2020 was supposed to be the year normalcy returned. The launch of Fortnite in 2018 led revenue and profits that year to soar: sales nearly doubled and Adjusted EBITDA quintupled. As result, HEAR stock at one point was up 18x in a matter of months, and returned 688% in calendar 2018. 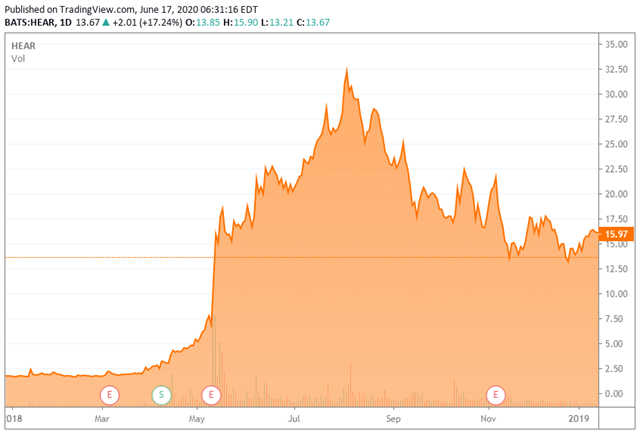 Both the rally in the stock and the performance of the company — both of which were unsustainable — weighed on Turtle Beach last year. Pulled-forward demand and a difficult comparison unsurprisingly led numbers to look rather weak: revenue fell 18%, and Adjusted EBITDA declined 60%. Short sellers had taken aim as the stock ran past $30 in August 2018; the retreat continued in 2019, as HEAR stock dropped by one-third and closed the year back below $10. 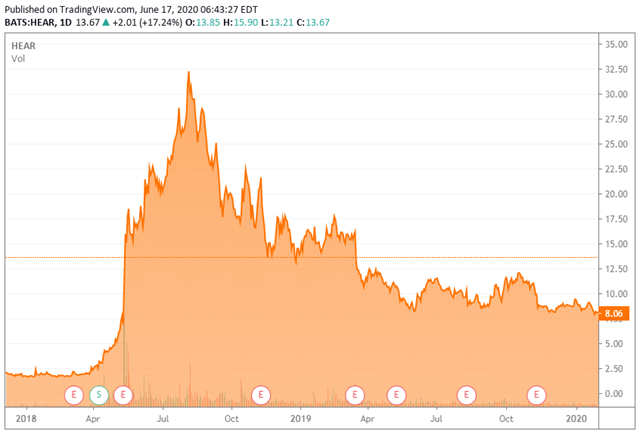 After that roller-coaster, 2020 was supposed to be the year when the story became clearer, and key questions were answered. How profitable was the business in a more normalized environment? Did 2018 represent peak earnings, as shorts seemed to believe?

Of course, 2020 has been anything but normal, and that likely means the answers to those questions will have to wait. In the meantime, even with HEAR bouncing sharply off March lows near $4, I still see some upside to the stock. Valuation is much more attractive than it appears at first glance. The strength shown in preliminary numbers released on Tuesday not only shows solid near-term demand, but rebuts a key pillar of the short case.

Admittedly, there’s a case for patience (or selling puts given attractive premiums). The actual second quarter release is probably at least seven weeks away. Though it closed up 17% on Tuesday, HEAR stock faded from intraday highs — twice. 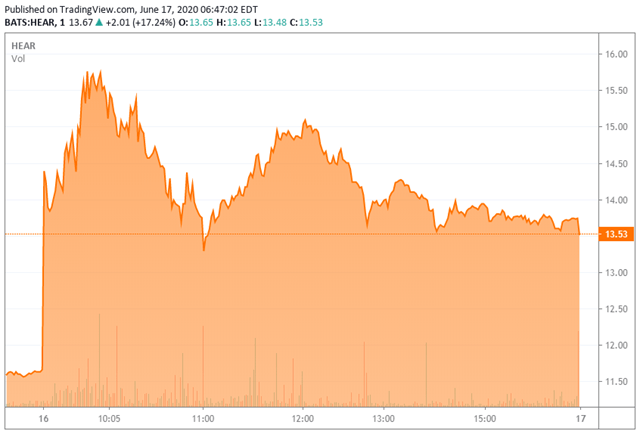 It’s probably the bull/bear battle that determines the direction of the stock at least until the Q2 release, and 2019 trading shows that bears can win that battle. Long-term, however, I still think HEAR is attractive below $14, and Tuesday’s news supports that case.

Particularly given the revised Q2 outlook and the big move in HEAR stock since March, it’s worth tackling the valuation first, to understand what exactly the market is pricing in. From this perspective, it still doesn’t look like much.

On its face, HEAR looks rather expensive. Before Tuesday, the full-year outlook was for adjusted EPS in the range of breakeven, with Adjusted EBITDA between $9 and $14 million. The latter figure suggested, based on the post-Q1 balance sheet, that HEAR traded at over 14x EBITDA based on Monday’s close.

EV/revenue multiples were more attractive (~0.7x), but given ~5-6% EBITDA margins and a second straight year of declining profits, that top-line valuation method hardly seemed out of line.

But there are two factors worth considering. First, the EBITDA figure includes about $9 million in investments behind the ROCCAT PC accessories business. Add that back, and EV/EBITDA on Monday moved to a more reasonable 8-9x. Adjusted EPS, when also adding back ~$0.05 in non-cash intangible amortization (which Turtle Beach doesn’t exclude from adjusted EPS), was in the range of $0.60.

HEAR wasn’t that expensive before the guidance hike. And that hike appears to be material to full-year results. Turtle Beach increased its Q2 outlook by $31 million at the midpoint of the respective ranges: about 14% of total projected full-year sales.

In the release, CEO Juergen Stark admitted that, “it remains unclear the extent to which the current sales surge represents a pull-forward of sales that might have otherwise occurred later in the year.” But he noted that reseller inventories remain thin, which suggests that most, if not all, of the $31 million should be tacked onto the full-year outlook. Those revenues should boost Adjusted EBITDA as well, though with an offset from “higher expediting costs” needed to move merchandise in Q2.

That model gets 2020 EBITDA to right about $20 million. That in turn values HEAR at a little over 10x EBITDA, based on Tuesday’s close of $13.67. But, again, that figure includes the ROCCAT investments, which are not permanent. Console headset EBITDA looks closer to $30 million. Against that figure, HEAR still trades at a seemingly attractive ~7x, with net income and normalized free cash flow multiples in the range of 10x.

HEAR Stock Should Be Cheap

Put another way, I’d argue that even after the 17% gain on Tuesday, and the 200%-plus bounce from March lows, Turtle Beach stock still is reasonably cheap. From there, the argument is whether it should be.

It’s a classic “value play or value trap?” debate. And the value trap argument essentially is that HEAR earnings are at or near a peak. After all, we’ve seen this story before. Turtle Beach printed money in 2012, at the beginning of the last console cycle, and within three years the company was unprofitable even on an EBITDA basis: 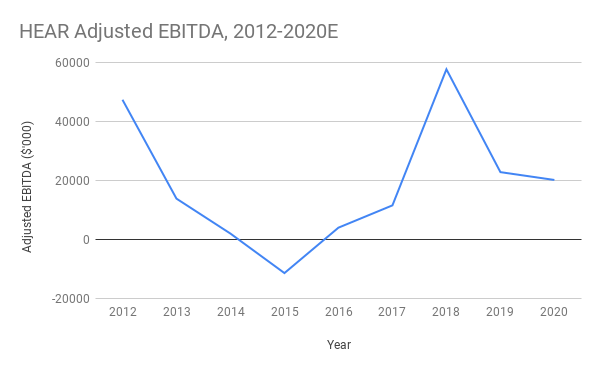 By April 2018, Turtle Beach was executing a reverse stock split to avoid delisting. A balance sheet that was almost 6x leveraged even before preferred stock raised legitimate and significant concerns about a restructuring.

From this perspective, Turtle Beach simply got lucky. Fortnite took off around the same time as the reverse split, which created a huge source of instant demand for both the products and the stock. But as was the case in 2012, a near-term peak is destined to be followed by significant, steady declines. It might even be worse this time around, given more intense competition from the likes of Logitech (LOGI), an excellent operator who acquired ASTRO Gaming in 2017. A spike in a single quarter driven by a global pandemic doesn’t change that long-term problem. 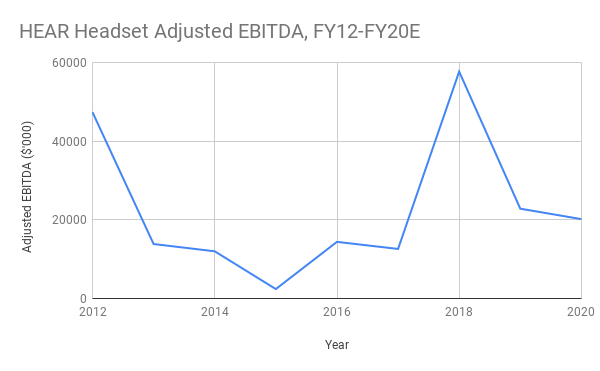 2015 profits admittedly were barely positive. But that year, in particular, was rough for the headset business, which had to ramp promotional activity to move product designed for older consoles.

The second is that 2018, if it did nothing else, fixed the company’s balance sheet. The preferred stock was retired, and the company rapidly paid down debt. Turtle Beach in fact closed Q1 2020 with a net cash position. (Working capital movements will require borrowings as the year goes on, to build inventory for the holiday season.)

So an investor can argue that 2018 results were unsustainable, which is true. But HEAR still is a better stock than it was in 2017 — and this has been a reasonably profitable business over time. Excluding 2012 (and including my FY20 estimate), the headset business has averaged over $19 million in Adjusted EBITDA annually. Capex normally runs around $4 million, which leaves normalized free cash flow past $10 milion. Exclude 2018 from that eight-year stretch (which seems too conservative, given that year’s performance no doubt hurt 2019 and even 2020 results) and Adjusted EBITDA still averages $14 million.

Looking at consolidated EBITDA (and the stock chart) from 2014-2016 in particular suggests that Turtle Beach was a broken business until it was rescued by Fortnite. I continue to argue that’s not the case. As Stark noted after Q4, the company has had market share over 40% for a decade. Share did dip in 2019, to 43.4% from 45.7% per numbers from NPD, but that came at least in part due to growth at the lower end of the market.

From here, this looks like a solid business at a reasonable valuation. And it’s facing an attractive market. New consoles from Sony (SNE) and Microsoft (MSFT) should drive growth in 2021 and 2022: per the Q4 call, Turtle Beach expects mid- to high-single-digit market growth in each of those years. ROCCAT is playing in a larger PC market, even if it will take some time to fill out its portfolio and drive share gains.

Fortnite isn’t going anywhere: it in fact acts as much as a social network as a game. Other games like Call of Duty have rolled out their own battle royale modes. And the explosive growth from Turtle Beach suggests those types of games have brought in new customers amid “stay at home” orders.

Even with the big rally in HEAR stock since March, I still don’t think the broader opportunity here is fully and correctly understood.

Why The Guidance Hike Helps the Case

The guidance hike is material enough to full-year results to support a big gain in the share price purely from a fundamental standpoint. But it may help from a qualitative perspective as well.

After all, Turtle Beach’s projected Q2 revenue is 55% above the high end of previous guidance. It’s higher than Q2 2018 — when Fortnite truly was taking off.

The update strongly suggests that the headset market isn’t shrinking because 2018 sales gobbled up years’ worth of demand in a single sitting. And, at least for now, it doesn’t look like Turtle Beach’s market share has gone anywhere, either. That’s a key point, given that Turtle Beach needs to grow roughly with the market (if only on a dollar basis) to provide real upside from here.

The timing of the quarter is interesting as well. Stark had said repeatedly that Turtle Beach sees a replacement cycle of about 24 months for headsets. Obviously, some of the growth in Q2 (and probably a good chunk of it) is coming from new customers. But it doesn’t seem like a pure coincidence that Turtle Beach is seeing a blowout quarter exactly two years after its business inflected. If the replacement cycle really is ~24 months, then the mid-term outlook improves. The second half of 2020 should be solid (thanks to customers acquired in 2H 2018), new consoles will boost 2021 numbers, and 2022 will benefit from the spike in customers captured this year.

This quarter seems to matter. And even though HEAR has more than tripled since March, the stock doesn’t strike me as terribly expensive.

Again, near-term trading could be dicey, given the intraday fades despite the update. Short interest actually is at a 2-year low (though still somewhat elevated), so we could see new shorts enter or, at least, perhaps not quite the squeeze which investors might have expected a year ago. There is a case for selling puts (though that trade admittedly didn’t work out great for me last year), as premiums are attractive, even if liquidity is inconsistent.

More broadly, there’s a case for short-term patience — but a strengthened case for long-term optimism. Turtle Beach seems to still have growth ahead — which means it’s still cheap enough below $14.

Disclosure: I/we have no positions in any stocks mentioned, but may initiate a long position in HEAR over the next 72 hours. I wrote this article myself, and it expresses my own opinions. I am not receiving compensation for it (other than from Seeking Alpha). I have no business relationship with any company whose stock is mentioned in this article.

Additional disclosure: I may take a long position in HEAR stock and/or execute a bullish trade in the options market.