As a decades-old conflict has reignited in the mountains of Nagorno-Karabakh, Azerbaijani forces battling with Armenia to capture disputed territory have unveiled a new tool in their armoury.

Nagorno-Karabakh is the fifth foreign conflict zone where Turkish drones have been deployed in recent years, with the country’s unmanned aerial vehicles (UAVs) also taking to the skies in Syria, Libya, northern Iraq and the eastern Mediterranean, where Turkey and Greece are at loggerheads over maritime rights.

The expanding Turkish drone industry is the culmination of a two-decade drive to boost defence production with the aim of reducing Turkey’s reliance on western arms purchases and stoking national pride. While some efforts, such as a plan to produce a fighter jet, are seen by many analysts as overambitious, the UAV programme has made Turkey an emerging drone power.

“Turkey is not overtaking the US, Israel or China but I’d say that Turkey is emerging as a significant competitor to all three countries,” said Dan Gettinger, co-director of the Center for the Study of the Drone at New York’s Bard College. “It’s quite a sophisticated programme.”

The development of Turkish-made armed drones marries perfectly with the more aggressive foreign policy stance adopted by Recep Tayyip Erdogan in recent years, with the Turkish president increasingly willing to deploy hard power in support of his international aims.

“Military force has become a really key element of Turkish foreign policy,” said Rob Lee, a former US marine and military researcher based at King’s College London. Armed drones, he said, offered Ankara “a lower threshold way of getting involved in conflicts”.

It is not clear whether the TB2 drones that analysts say have been deployed in Nagorno-Karabakh are owned and operated by Azerbaijan’s military or by their Turkish counterparts. Their manufacturer, the Turkish military and Turkey’s defence industries directorate all declined to comment.

Either way, Carey Cavanaugh, a former US ambassador and chief US negotiator for the conflict, said that the use of drones by both parties in the disputed Caucasus region had radically altered the scale of the fighting and the potential death toll, allowing them to hit targets previously restricted by the mountainous terrain and use of trench warfare.

Ankara hopes that the high-profile use of its technology will boost the country’s defence exports. Turkey’s foreign defence sales still pale in comparison with those of the US, which earned $56bn from arms exports in 2018, or Russia, which earned $13.7bn the same year.

The country sold $3bn worth of equipment to other nations last year — mostly tanks and armoured vehicles, aircraft parts, and guns and ammunition, according to a defence official. But that is up from $248m in 2002. Officials hope to reach $10bn in 2023.

Turkey’s efforts to create its own drones are closely linked to the long-running fight with the Kurdistan Workers party (PKK), a Kurdish armed militia that has been battling the Turkish state since 1984.

The resurgence of the conflict and problems in procuring and operating UAVs from foreign states spurred a fresh push by Turkey’s defence industries directorate in the early 2000s to make drones its “highest priority”, according to Arda Mevlutoglu, an Ankara-based defence analyst. He added: “We are now just getting the results.”

One of the leading manufacturers is state-owned Turkish Aerospace Industries, whose Anka-S armed drone took part in a Turkish campaign against the Russian-backed Syrian regime earlier this year.

But a large part of the fleet used by the Turkish military in Syria — as well as the drones deployed in Libya and in Nagorno-Karabakh — is the brainchild of Selcuk Bayraktar, an aerospace engineer who in 2016 married Mr Erdogan’s daughter Sumeyye.

In a rare interview in February, Mr Bayraktar’s brother Haluk pushed back against claims that the decades-old family business, Baykar, had received favourable treatment thanks to its newfound presidential connections, dismissing such accusations as “dirty politics”. Mr Bayraktar, who is the company’s chief executive as well as chairman of Saha Istanbul — an aerospace cluster representing more than 400 producers — attributed the Baykar’s success to his family’s vision and hard work.

Baykar sold its first batch of drones — a small surveillance model — to the armed forces in 2007 after winning a design competition. Two years later, it won a tender to produce and sell an armed UAV, the Bayraktar TB2. 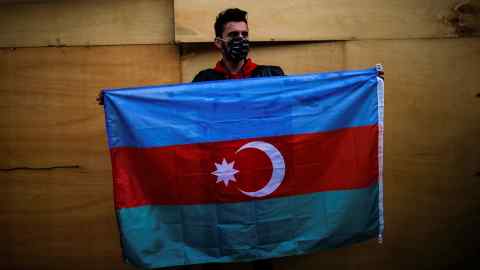 Since 2017, an armed variant has been extensively used against the PKK. “Drones have enabled them to drive the PKK out of mountainous pockets where they had established a significant presence for more than 30 years,” said Nigar Goksel, the Turkey director of International Crisis Group, a conflict prevention organisation. Their use has been heavily criticised by human rights campaigners, who say that civilians have been killed in UAV strikes.

The industry has also stoked international controversy, a potential problem for producers such as Baykar, which imports 7 per cent of the components used for the TB2. On Monday, the Canadian government announced that it was suspending exports of some imaging equipment to Turkey, a Nato ally, after critics raised questions about the use of the technology in Nagorno-Karabakh.

Turkey’s drones are not infallible. In Libya, Baykar’s TB2s have suffered from a “high attrition rate”, according to a UN report published in December.

Yet even battlefield setbacks are valuable to Turkish producers. “When we think about military innovation, experience is one of the most important factors,” said Caglar Kurc, an adjunct instructor in the department of international relations at Ankara’s Bilkent University. “Turkey has wracked up significant experience that will reflect on future development.”